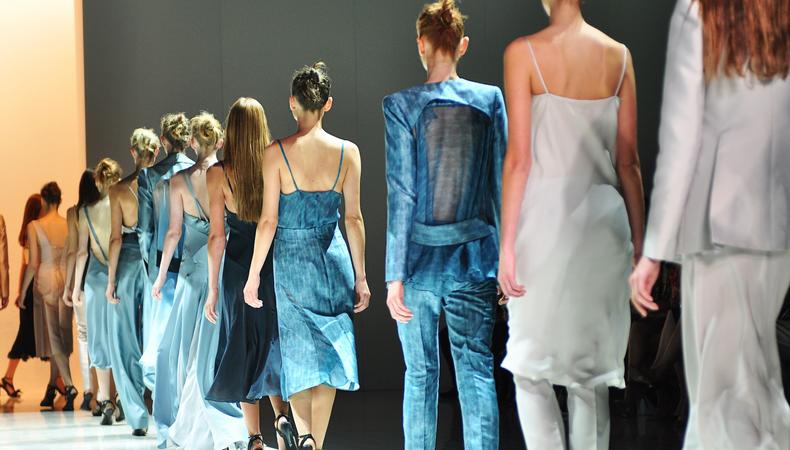 Australia punches well above its weight when it comes to world-class model exports, and you may well be the next one to join the ranks. Before you dive into the top five agencies to consider for your Aussie rep, consider these general modeling pointers, particularly if you’re just starting out.

What do modeling agencies look for?

A note on modeling agency safety:

Here are the top modeling agencies in Australia:

The Breakdown: This is the big-name agency responsible for unearthing some of Australia’s most exciting talent. In just five years, Adut Akech went from signing her first contract with Chadwick to signing multimillion dollar contracts with Victoria’s Secret and Estée Lauder.

Submission policy: Submit via email to your nearest Chadwick office, including your contact details, measurements, and a couple of recent snapshots (not exceeding 2 MB total). Women must meet the minimum height requirement of 5'8" or 173 cm; males should be 6'0" or 183 cm.

Founded in 1976, Chadwick Models has cemented itself as one of Australia’s powerhouse agencies over the past 40-plus years, with a heavy focus on campaign and editorial work. However, it’s been equally well-represented on the Alexander McQueen, Miu Miu, Prada, and Yeezy runways.

Chadwick also develops and manages some of Australia’s most influential social media personalities (including Elisha and Renee Herbert, Steph Claire Smith, and Tammin Sursok), with a combined social following of more than 10 million.

For those based in Perth, check out Chadwick’s Modeling Academy for children and teenagers.

The Breakdown: This is a complete talent management package backed by a team of media-industry professionals. Chic prides itself on “always moving into the future with creative, strategic ideas.”

Submission policy: Submit via email to [email protected] with the following information: your name, date of birth, and contact phone number; your measurements (height, bust, waist, and hips); a clear, simple portrait photo (as a JPEG); and a statement of parental approval (if you are under 14 years of age). Chic will reply to submissions of interest within seven days.

A major player both nationally and worldwide, Chic was founded in 1992 by Ursula Hufnagl. With an emphasis on editorial and commercial work, Chic models have appeared in campaigns for Chanel, Dolce & Gabbana, Dior, and Gucci.

Similarly to Chadwick, Chic also manages a select group of influencers (such as Isabeli Fontana, Natalie Roser, and Michelle Bridges), as well as directors and producers under their Digital Creative banner.

The Breakdown: This agency is an international giant with footholds in all the major fashion capitals. While it’s definitely one of the bigger names out there, this agency is sincere and serious about scouting and development.

Submission policy: Submit via IMG’s online form, which requires your contact details, measurements, four photos (full-length, waist-up, close-up, and profile) and two video clips—one of your walk and another of your personality.

Sports agent Mark McCormack decided to set up IMG Models as a new division of the already hugely successful IMG Worldwide to support his belief that models should be managed in a similar way to professional athletes, actors, and entertainers. IMG models have been on the covers of Vogue, Harper’s Bazaar, Dior, and Elle.

IMG has also been proactive about addressing mental health within the industry, creating Model Prep, a biannual initiative devoted to the “total well-being” of young models.

The Breakdown: Priscillas is singular, quirky, and raw—think edgy editorials and international exposure, and subverting notions of the traditional model.

Channeling a boutique management style, Priscillas is renowned for its close-knit vibe and ethos. As Doll Wright, head of booking and scouting, says, “A model agency should become an extension of a model’s family…. We are involved in every aspect of our model’s life, professionally and emotionally.”

Its roster of distinctive faces have often appeared on Vogue covers (from Australia to Russia, Paris to Hong Kong, and Portugal to Japan) as well as Elle, Harper’s Bazaar, Vanity Fair, and i-D. It’s a testament to the sheer variety and appeal of their models.

The Breakdown: This is a well-established agency with a reputation that precedes it. Ever on the lookout to launch “a virtual unknown into model superstardom,” Vivien’s is certainly one to consider if a parallel career in acting is what you’re after.

Submission policy: Submit via email to your nearest Vivien’s office, including your contact details, measurements, and a couple of recent snapshots (not exceeding 2 MB total). Women must meet the minimum height requirement of 5'8" or 173 cm and be between 14 and 20 years old; men should be 6'0" or 183 cm and at least 16 years of age.

After Vivian’s opened its doors in Sydney in 1967, offices in Melbourne, Brisbane, and Perth soon followed. It’s a strong indication of Vivien’s good reputation and presence across the country.

Though it’s a family-owned operation, clients have worked with the best of the best worldwide. Many models have successfully transitioned into film, TV, and music. (Courtney Eaton, for example, starred in “Mad Max: Fury Road”), and Vivien’s now has a department that nurtures social influencer talent, too.