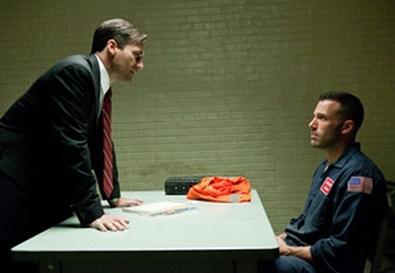 You can take the boy out of Boston, but Ben Affleck isn't done with his hometown. For his second stint in the director's chair, he's back in the city's working-class streets, again adapting a crime novel. As with the impressive but flawed "Gone Baby Gone," a blue-collar authenticity invigorates "The Town," the story of a young criminal who is ready to change his life -- after that one last job.

Affleck gets the tribalism of Boston's traditionally Irish-American enclaves; it's a defining force in his characters' lives. But for all their well-played grit, those characters resolutely remain types, and for all the well-choreographed action, the outcome doesn't matter nearly as much as it should. When the Warner Bros. release bows Sept. 17, following its out-of-competition premiere at the Venice Film Festival, its cast and the promise of a grown-up thriller will nonetheless draw many of the same filmgoers who put "The American" atop the box office.

Based on Chuck Hogan's "Prince of Thieves," the drama revolves around the neighborhood of Charlestown, where, onscreen titles explain, robbery is a lifelong trade, passed down through the generations. Doug MacRay (Affleck) has been knocking over banks and armored trucks for as long as he can remember. His partner in crime is hothead James "Jem" Coughlin (Jeremy Renner), a childhood friend who increasingly uses their bond as emotional blackmail and whose hair-trigger violence escalates the danger of their work.

In the first adrenaline-rush action set piece, Jem brutally beats a bank employee during a heist and impulsively takes a hostage, branch manager Claire (Rebecca Hall). But kidnapping is not the boys' game, and they quickly release her, only to discover that she's a local girl, albeit one living in the neighborhood's gentrified quarters. Even if she could identify the masked robbers, Claire's not eager to cooperate with FBI Special Agent Frawley (Jon Hamm), who is determined to crack the case. Jem is antsy to make sure she won't talk, but Doug insists he'll take care of it.

What he does is fall for her, and she for him. However far-fetched the connection, Affleck and the versatile Hall make it work, at least for a while. As director, he orchestrates a few terrifically tense sequences built upon his character's secret: first, when Doug sizes up Claire in a Laundromat, then when he advises her on how to deal with the FBI -- "You're the one who's vulnerable" -- and especially during a scene at an outdoor cafe, where Jem interrupts a date and susses out the situation with more than a suggestion of menace.

As our rooting interest, Affleck is sympathetic, if not compelling. Caught between old-school loyalty and the promise of something beyond Charlestown, Doug belongs to the lineage of honorable crooks, a movie staple. He represents the possibility of reform. His visit to an AA meeting is dealt with in a refreshingly succinct manner and provides more evidence of the filmmaker's eye for local faces.

The script, credited to Peter Craig, Affleck and Aaron Stockard, taps into the right veins of provincialism and sarcasm but moves less surely between reckless action and intimate drama. Doug's moral distance from the accelerating brutality of his gang's jobs, and especially from Jem's volatility -- so evident in Renner's every move -- is meant to up the stakes, and a third-act heist at Fenway Park just looks crazy. Meting out pieces of Doug's backstory -- complete with a brief and bracing turn by Chris Cooper as his father -- isn't enough. You feel the storytelling wheels turning, not the intended visceral punch.

It takes Hamm a while to dig into his stock-character lawman and shake off the specter of Don Draper. He has to fight his way through some unconvincing tough-cop dialogue, but as the story proceeds and his 5 o'clock shadow deepens, he makes a bit of wiseass talk sing, as does Affleck, during an interrogation scene. In the smaller role of a Boston detective, Titus Welliver is persuasive, and Blake Lively fully embraces the messiness of Doug's dissolute sometime girlfriend. As the Charlestown equivalent of a Mafia don, Pete Postlethwaite capitalizes on the chance to pare the leaves from long-stemmed roses while delivering deadly ultimatums.

Whether zeroing in on a tete-a-tete or following a high-velocity chase through narrow streets built for another century, Robert Elswit's fluent widescreen camerawork and Dylan Tichenor's editing are strong components, as are all the design contributions. The treacly score by Harry Gregson-Williams and David Buckley, on the other hand, tends to distract rather than enhance.

Affleck excels at capturing the insularity of the locale. BlackBerries and OxyContin show up, but otherwise this might be the '70s. He includes a nod to that decade's Boston-set "The Friends of Eddie Coyle," a melancholy crime drama that would have laughed this movie's sentimental ending right into the Charles River.