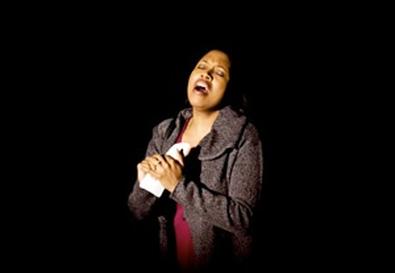 Bryan Putnam crafts an intricate and beautiful story in "The Toymaker," for which he has provided both book and score. The show tells the parallel stories of the titular craftsman in the Czech town of Lidice, which was destroyed by the Nazis in 1942, and modern-day Sarah Meeks, who embarks on a journey to find the toys lost in the Holocaust and the missing pieces of herself. Under the direction of Lawrence Edelson, the two plots are woven seamlessly together, preserving boundaries for clarity's sake and at times intersecting to hit the audience with emotional poignancy and relevance.

From the moment the follow spot strikes her, Rosena M. Hill as Sarah evokes hurt and hope. Her emotive soprano marries the meaning of the lyric with the moving melody in "Am I Crazy?" She maintains power without overshadowing in duets like "An Unlikely Pair," sung with her much younger confidante Doby (Bryan Welnicki).

As Sarah's husband, Jason, Greg Stone's vocal talent is underused, but it resonates with understanding and ability in his duet "The Girl I Knew" with Rob Richardson as Petr Klimes, the toymaker of the 1940s. While Richardson's deep vocals fit his gentle-giant character, they often sound forced, especially next to Stone's more supported tenor. Newcomer Jessica Burrows impresses with her moving vocals and convincing desperation next to seasoned veteran Joan Barber's heart-wrenching portrayal of a former Nazi soldier quivering with shame.

Despite the production's dragging length—the show could have ended three times and some scenes need pruning—the cast breathes life into the compelling story and score, adeptly portraying multiple characters in multiple decades.

The ensemble masters Putnam's intricate harmonies and Edelson's intricate staging, which includes some puppet movement. If audiences can embrace the dark plot and the writers can pare down the length, perhaps "The Toymaker" will craft a musical success.