'Trainspotting' Finds the Right Balance Between Grim and Funny 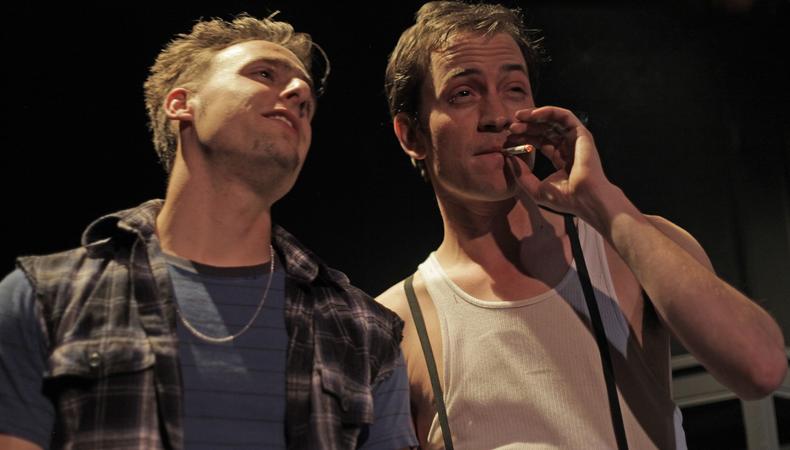 Drugs, violence, sex, and Scottish vulgarities abound in Irvine Welsh’s cult classic novel “Trainspotting.” Seat of your Pants Productions and Classified Productions’ remounting of their 2002 edition of Harry Gibson’s stage adaptation brings out the best of the story’s crude humor and, in spite of its gruesome nature, even a few heartwarming moments.

“Trainspotting” is a grisly version of a coming-of-age story. It follows Mark Renton, an Edinburgh youngster with a long list of vices, chief among them a heroin habit. Mark makes multiple attempts to give up the drug, and the challenge takes its toll on his personal relationships as well as his body. But while Mark and his friends repeatedly make destructive life decisions, they manage to learn a thing or two along the way.

Director Roger Mathey won a Los Angeles Drama Critics Circle Award for directing “Trainspotting” the first time around. Once again, his direction is effective. Mathey’s staging creatively transforms the small black-box Elephant Theatre into Mark’s world—the streets of Edinburgh, a family home, the nightmarish inside of a drug trip—before our eyes. Mathey got special permission to expand this four-person play into a larger ensemble show, and his cast handles the adaptation confidently. While Mathey’s work overall is very tight, the final moment feels underdeveloped and anticlimactic.

Most of the actors alternate in their roles; the only character not double cast is Mark. Justin Zachary reprises the part, and his performance makes the show. Onstage for almost the whole play, Zachary balances his duties as narrator, making tongue-in-cheek asides to the audience, and main character, leading his compatriots through misadventures. Zachary nails Mark’s Scottish accent and apathetic-junkie persona. His scenes of heroin withdrawal are stomach-churning but powerfully acted.

As Mark’s pal Tommy, AJ Jones skillfully portrays his character’s downfall from spirited go-getter to sickly drug user. His job-interview scene, which he plays opposite Michael Lutheran, is one of the show’s funniest. Among the ensemble Francesca Manzi is amusing as a shrill old woman on a bus, and Elizabeth Knowelden, as Tommy’s girlfriend Lizzie, earns laughs with her sassy one-liners.

A Scottish accent is difficult to master, and the brogue hinders a few performances. Martin J. Riddell, as Mark’s friend Franco, is appropriately gruff but almost impossible to understand. Sarah Allyn Bauer, as love interest Diane, is too hesitant with her lines.

“Trainspotting” is definitely not for the squeamish or faint of heart. It is often as gag-inducing as it is thought-provoking, but with strong direction and performances the production finds the right balance between grim and funny.