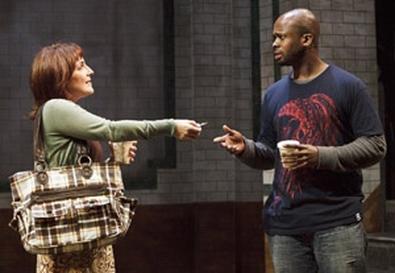 Photo Source: James Leynse
It's kinda fun to hear those a cappella singing groups in the New York City subways, but an entire evening of it? That's the basic concept of "In Transit," a new musical presented by Primary Stages at 59E59 Theaters. A cast of seven talented singer-actors creates every note of the score without any instruments to back them up. The book, music, and lyrics are credited to four people: Kristen Anderson-Lopez, James-Allen Ford, Russ Kaplan, and Sara Wordsworth. This quartet shares "original concept" credit with an additional two creators, Gregory T. Christopher and Karla Lant. The large creative team may account for the inconsistent feel of the show. Basically a revue following several subway riders as they pursue romance and careers in the Big Apple, "In Transit" features catchy and ingratiating sounds but not particularly original storylines.

Full marks to the four writers for some bouncy songs and clever lyrics and to musical director Mary-Mitchell Campbell and the cast for creative arrangements and harmonious delivery. But the intersecting plots are mostly familiar. Do we really need to see yet another supremely talented temp struggling to make it as an actress? And haven't there been enough stories about sweet-natured gay young men hiding their sexuality from religious parents back home? How about a new twist on the lonely girl unable to get over a bad breakup? The only character who seems fresh and different is a former high-powered trader dealing with the recession and settling for a job at Staples.

The most original moments are not related to these characters and their stories at all. The biggest laugh came from a short bit with Denise Summerford playing a Girl Scout leader and her entire troop by means of a harness fitted with several puppets. The funniest individual number departs from the continuing plots and concentrates on such New York archetypes as coffee vendors and hard-working nannies and—in director Joe Calarco's smartest piece of staging—climaxes in a hilarious smack-talk session between Graham Stevens as a cab driver and Tommar Wilson as a subway conductor over whose means of transportation is superior. Celisse Henderson joyfully leads the number as a bored transit worker who bursts out of her uniform to reveal a stunning dress made of MetroCards (the sassy costume design is by Jennifer Caprio).

If "In Transit" had followed these promising leads rather than the same old worn-out track, it could have taken the audience on an express trip to musical comedy heaven. As it stands, it's a pleasant-enough outing, but not a complete joy ride. In addition to those already mentioned, the exciting cast includes Steve French, Hannah Laird, and Chesney Snow, who narrates the proceedings as a combination street musician and human sound-effects machine.