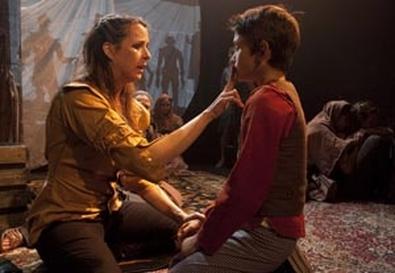 Photo Source: Patrick Barragan
Ancient Greek dramas can be wordy affairs, and Euripides' "The Trojan Women" is no exception. Short on action and long on exposition, the play is packed with lengthy speeches in which different characters relate the events of recent history and what is to come. Set at the end of the Trojan War, Euripides' drama centers on the plight of the survivors, the women of Troy, who, having lost all their menfolk, are being taken away to serve as slaves and concubines to the victorious Greek invaders.

With Wide Eyed Productions' agonizing mounting of the emotionally grueling play, director (and founding artistic director) Kristin Skye Hoffmann is attempting to emphasize the timelessness of the suffering of women in the aftermath of war. Set designer Alfred Schatz creates a scene of destruction, littering the stage with ancient as well as modern artifacts—a chalkboard, newspapers, and a teddy bear alongside stone ruins and iron cooking utensils—to conjure a ravaged setting of no specific era or locale. Yet while Hoffmann's production is effectively staged and conveys the enormity and universality of the feminine despair, anger, and inequality, the play's abundance of language presents too great a challenge for most of the cast.

To express their anguish, the actors too often resort to loud, overwrought, high-pitched screeching. An entire evening of this piercing single note grates on the nerves and undermines any sympathy one may be forming for the women; instead, you just want them to shut up and get carted off to Greece as soon as possible. Possessed of more vocal dexterity or voice training than the other female actors, only Kirsta Peterson, as Andromache, employs a full range of pitches and dynamics, using her voice to support the emotionality of her speeches by building from deep, alluring tones to short, anguished shouts of hysteria.

The two men in the company perform relatively small roles yet provide a welcome change of aural aesthetics. Justin Ness is wonderfully commanding as he convincingly plays both King Menelaus and Poseidon, the God of the Sea. And William Reid, as Talthybius, the Greek messenger, brings an excitingly aggressive physicality to his thuggish character. Unfortunately, in the leading role of Hecuba, the former Queen of Troy, the thin-voiced Amy Lee Pearsall relies too heavily on clichéd old-lady mannerisms and expressions to add sufficient color to her many extended orations.