The Unassuming Genius of Laurie Metcalf 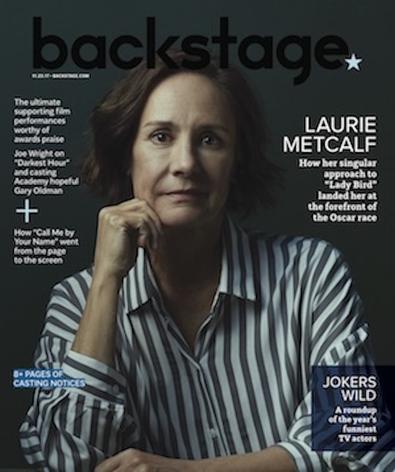 Watch out for the Laurie Metcalf Spin—it’ll get you every time.

“ ‘Oh, that’s an interesting way to say that line,’ ” the actor quips, positing a desired response to a choice she’s made. “Or, ‘Why is she saying one thing and doing something completely opposite?’ I love trying to embellish a script with as many surprises as I can think of.”

One needn’t look further than Metcalf’s recent string of projects to see what she means. Her Tony-winning turn as Nora in last season’s “A Doll’s House, Part 2” had her mining the hidden humor of Lucas Hnath’s rat-a-tat script, one monologue at a time; Dr. Jenna James of “Getting On” (a series that earned Metcalf her 10th Emmy nomination, following a slew of guest actress appearances and three wins for “Roseanne”) allowed her to warm audiences to a flawed hero up to her eyeballs in stool samples and naked narcissism; and now Greta Gerwig’s “Lady Bird” gives her a role in Marion McPherson that many hail as a shoe-in for Oscar night. That’s largely because it allows Metcalf to do what she does best: surprise us.

“I want characters that lead with their flaws. They’re not afraid. They are driven and selfish,” Metcalf says. “I find those characteristics really funny, and you kind of end up rooting for those people because they care so goddam much about what they want—and you better get out of the way. It [is] weirdly endearing.”

Considering her last few years of work, Metcalf concedes that she’s “on a mini-roll,” and embraces the opportunity to perform in varied arenas. “Whether they’re in theater or TV [or a] movie, it’s great to be able to bounce around between the three. I don’t ever want to get burnt out on one or the other.”

While she has proven skilled across all mediums, it was onstage at Chicago’s Steppenwolf Theatre Company that she first planted her acting roots in the early ’80s, and where to this day she feels most at home. Over the course of our October morning interview at the NoMad Hotel in Manhattan, she inadvertently refers to “Lady Bird” as “the show” or Gerwig’s “play” before catching herself—“I’ve been doing plays!” It is perhaps theater’s ability to put the actor in the driver’s seat that draws her back again and again. (The four-time Tony nominee is back on Broadway early next year in Edward Albee’s “Three Tall Women” from director Joe Mantello.) 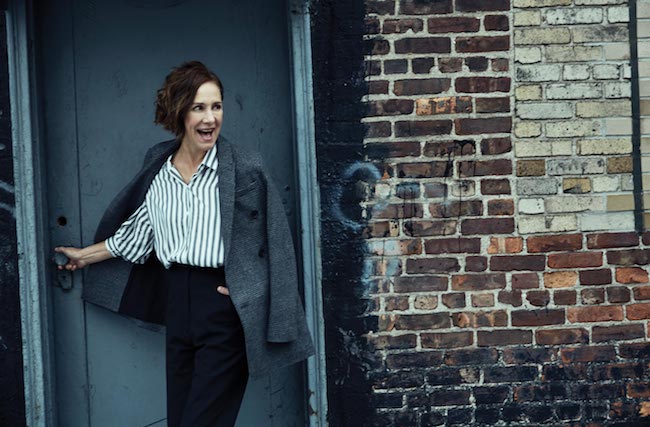 “I feel more inhibited in movies and TV than I do in theater,” she admits. “I need as much rehearsal time as I can get to flesh out the journey that I want to take you on. You’re not even really satisfied with what you’re doing until much further past opening night in theater.” Television and film, on the other hand, is “so, so quick, and half the time, you do your take three times and then we’re moving on and you’re like, ‘Did we get it? I don’t even know what we did. I’m not sure.’ You’re very much reliant on the director. That’s how it should be, but you start to self-doubt.... I’m very hard on myself.”

Luckily, Gerwig proved the perfect captain to helm the “Lady Bird” ship. Calling back to her signature “spin,” Metcalf credits the writer-director with infusing Marion with the sorts of complexities she relishes. “All of the character clues are in the writing, and I really relied on Greta to steer me through,” she says.

As an overworked and overtired mother of two, few things are clear-cut with Marion. Her anxieties over the family’s finances after her husband is laid off bleed into nearly every exasperated interaction she has with her titular daughter (played by Saoirse Ronan), and inform her hair-trigger temper and constant passive-aggressiveness.

That doesn’t mean, however, that she is devoid of kindness or patience. We see her consoling Lady Bird (née Christine) after an especially humiliating encounter with her boyfriend; we see her sitting at her sewing machine well into the night to tailor her only daughter’s new dress; and in the film’s opening scene, we see her in the car with Lady Bird shedding tears after the final moments of their “The Grapes of Wrath” audiobook—and later again behind the wheel sending her little girl off to college. 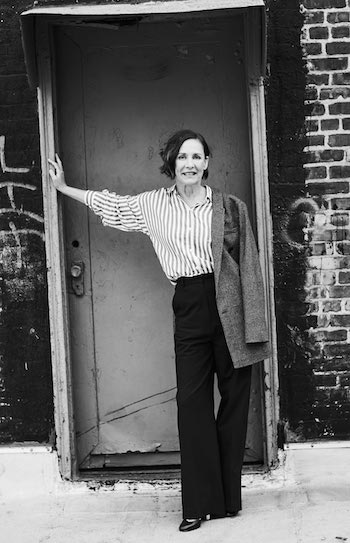 “I think the spin came from Greta in the writing of this,” Metcalf says. “She crafted those moments into the script.”

Marion’s relationship with Lady Bird is primarily shown as a tableau of infighting and disagreement, but these singular moments sprinkled throughout paint her as less a monster mom and more a woman doing the best she can under trying circumstances. She falters in showing it, but Marion speaks and acts first and foremost out of maternal concern and boundless love.

“You have to remember that it’s a sliver of their lives where they are at odds with each other,” Metcalf says. “You know, it’s probably been that way for a couple of years, but it wasn’t that way before and it won’t be that way afterward.”

To highlight anything less “could have been a trap in the movie,” she continues, again explaining that she wanted to emphasize the unexpected. “On the page, it’s really easy to go for the aggressive side of her, so when I did rely on Greta, it was for showing the other side.”

That reliance went both ways. Speaking with Backstage, Gerwig recalls how Metcalf brought many of Marion’s nonaggressive moments to light herself, like when she gets a gift for her co-worker’s newborn or empathizes with Lady Bird’s drama teacher, Father Leviatch (Stephen McKinley Henderson). She is quick to heap praise on the actor. 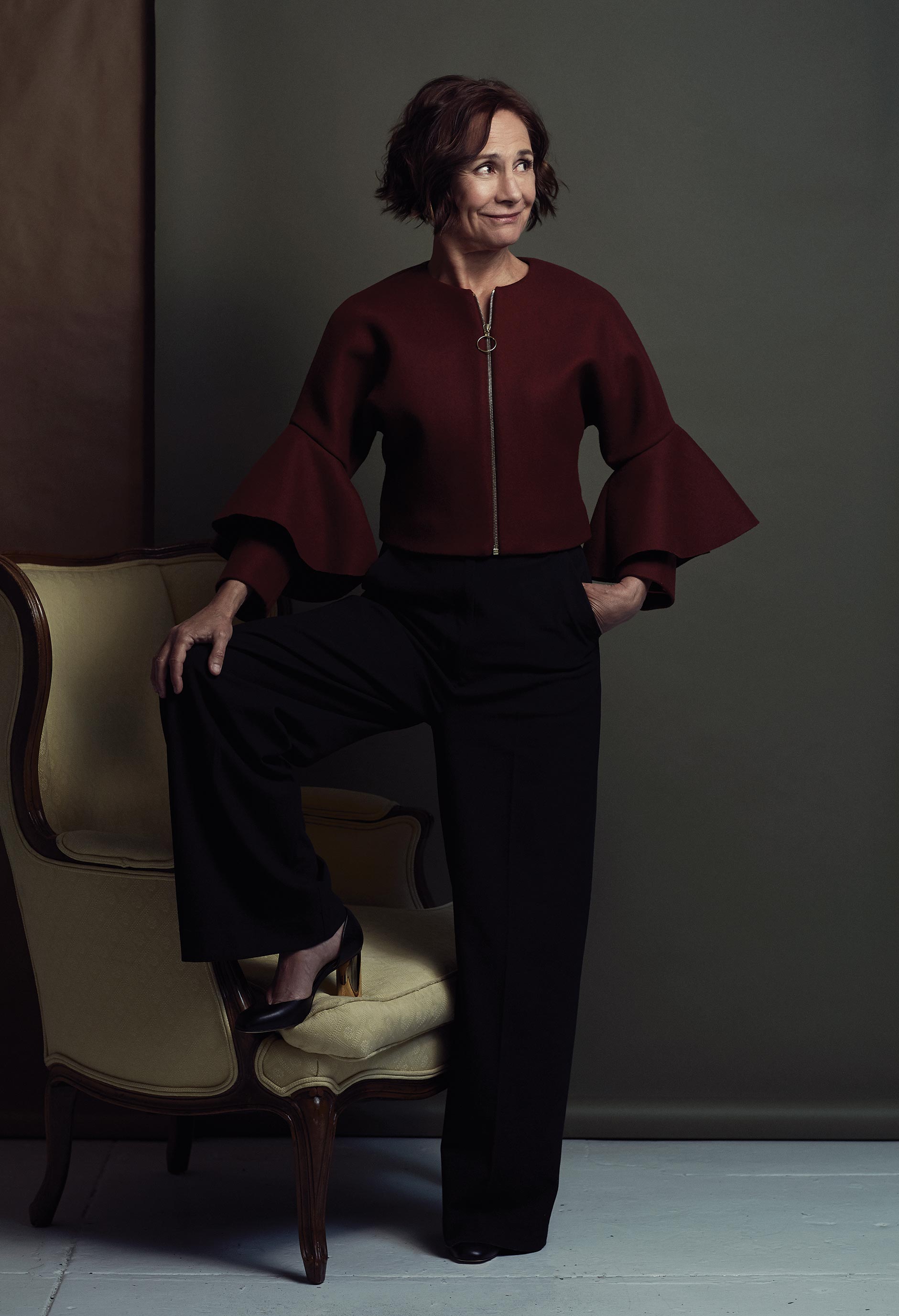 “First of all, Laurie is a goddess and we should all worship at her altar,” Gerwig says. “It feels like she’s the best-kept secret in a way, how extraordinary she is, [and] nothing has been more gratifying to me than seeing people respond to her in this film. We really worked on the part together. It felt closer to theater than anything.... She was respectful of the words but always looking to bring her formidable skill and toolkit as an actor to make it as rich as it possibly could be, which as a director and a writer is always your dream: that the actor improves it all.”

While her finesse for finding a script’s richness is difficult to replicate, Metcalf teases her process for getting the most out of a writer’s words, saying that her first step to putting a spin on a line read is to take her pages and rid them of punctuation. “It might spark me to break up a line where you wouldn’t expect. It’s just a little technical thing, but it makes me start on the road of thinking outside the box.” She advises actors to not overdo it, though.

“You just need that one little drop of empathy—like, ‘Oh, I see where they’re coming from now, but I still can’t forgive them because they’re still obnoxious,’ ” she says. “The little drop goes such a long way, and all [my recent projects] built that kind of character that can get away with the sometimes obnoxious behavior or ugliness because they’ve also given you a little crack of the door into the other side of them.”

When you’re given such an opportunity as an actor, don’t be afraid to cross the threshold.

“Look for the humor in the dramatic elements and the drama in the funny parts just as an exercise to be unexpected,” Metcalf says. “If you just put that exercise on it, you never know what you’re going to find.”

“The audition room is tough, and I feel, just speaking for myself, no matter where you are in your career, it’s hard not to have the nerves kick in—probably impossible,” Metcalf says. “So all I’ve ever heard or tried to do is use the nerves if you can; let your character be in that place instead of trying to shut them down, because that’s impossible and that just looks [bad]. Then you’re just in some horrible flop sweat—you know, you’re not getting anything; you’re not going to be rewarded with the part. Just try and say, ‘OK, well, my character’s going in here extremely nervous about something,’ and try and use it.”

Benjamin Lindsay
Benjamin Lindsay is managing editor at Backstage, where if you’re reading it in our magazine, he’s written or edited it first. He’s also producer and host of a number of our digital interview series, including our inaugural on-camera segment, Backstage Live.
END_OF_DOCUMENT_TOKEN_TO_BE_REPLACED