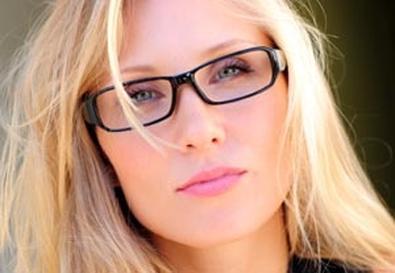 It's Tuesday at 12:26 p.m., and I'm standing in the middle of a Petco pet store, in the aisle with the dog collars and chew toys. A man in maroon bike shorts and a "Palin Sucks" T-shirt keeps eyeing me as he fiddles with a box of Milk Bone dog biscuits. I look away and try to concentrate.

I'm wearing a billowy blue mini-dress and heels, in full makeup, my hair prepped. I picked this outfit on purpose—so I can disrobe easily. Why?

It's nothing seamy or weird. I have a commercial audition.

My new commercial agent found me a part as a body double. If you've never done it, the role is simple. It's what it sounds like; they see your body. That's it. No more, no less. And for that they pay you well. I love commercials! (Thank you, my agent...)

For this role, I am to wear a thong and a strapless bra. "Underwear only, please," the email read. Ah, the life of an L.A. actress...

Actually, my audition is above the Petco. (Somehow, this place is one of the more popular buildings for commercial auditions in Los Angeles.) And I'm downstairs in the pet store mentally preparing myself to stand in a room full of people in a teal lace thong. For the occasion, I'd splurged and spent my last $20 on a nice pair.

Now, the moment of truth has arrived. I grit my teeth and climb the few flights of stairs. Beautiful people pass me, loudly name-dropping into their iPhones.

On the top floor I enter the busy waiting area.

It could just be me, but it feels like a bad commercial: Everyone stops and stares as I enter. No, it's not me, I realize—it's Los Angeles. Everybody stares. They stare to see if you're 'somebody.' I feel like waving, just to freak them out. Instead I'm quickly sized up, determined to be 'not somebody.' Everyone then returns to what they were pretending to do.

The dozen or more audition rooms are all right next to each other. Several different castings are going on at the same time. I have to find which room is mine. I was told to look for a something labeled the 'Body Double Area.'

One area is full of heavyset middle-aged men (obviously not); another has all teenage boys (nope). Up and down the hall I try to act like I know where I'm going, walking with a purpose. Yet I feel a tad uncomfortable peering into each casting area—maybe self-conscious is the word. No—lost. That's it.

Finally I pass an area full of tall, painfully thin young women with high cheek bones, all of whom look like they're in their late teens. That can't be it. I'm about to walk on when I look up and see the sign: 'Body Doubles.'

I try not to get insecure, but I am, of course. Why was I sent out for this body-double role? I'm not saying that I'm not attractive, but there is a serious difference between a supermodel and an attractive woman.

Ok. I breathe. Whatever. I can do this, I tell myself. I'm here, aren't I? If they didn't want to see me, they wouldn't have called me in, right? The casting people saw my photo and measurements before calling me in, so they must want to see me. I have just as right as anyone to be here.

I look around to see what I'm up against. A giraffe-ish brunette sipping a Starbucks iced latte is next to me, white iPod earbuds jutting out from her ears. Her black jeans look like they were vacuum-wrapped to her legs. Completely without rhythm, she taps her pointed-toe stiletto against the floor—tap, tap-tap, tap, tap—which quickly becomes irritating.

I smile nervously. She glances at me, slurps her drink, then ignores me.

Against the wall crouches a redhead with thin, elongated arms. She's pale like Nicole Kidman, with thin pointy lips that are barely noticeable under her prominent nose. She looks impatient. Her eyes have an "I'm too good to be here" stare. She pages through her modeling portfolio, which has "ELITE" printed on the front.

In one of the nearby movie auditions, the girls are screaming and laughing with one another. From down the hall I hear one say, "Oh my God. So I know the producer of 'Lost,' and he's, like, having like a party this weekend in, like, the Hollywood Hills. You should totally come!"

I'm stunned by the absolute quiet in our area. They're silent! Just staring at the walls. There's a feeling of sheer cruelty here. 'They must be hungry,' I quip to myself.

A fuller-figured Hispanic woman finds a seat next to me. Anywhere else in the world, she would be of average weight, but in this room she would be considered heavy. We size each other up, without talking.

"Are you here for the body-double audition?" she asks finally. As I'm about to answer, a portfolio-carrying Asian supermodel exits the audition room. She struts past sporting a pair of oversized sunglasses and knee-high boots—the kind I like to wear in Europe because they make me feel pretty and ohhhhh so European. She doesn't look at anyone, and is speaking accented French into an iPhone.

The Hispanic woman and I look at each other at the exact same moment, and burst into a fit of laughter.

"Apparently I didn't receive the supermodel memo," she quips.

Her name is Irina. We chat like old friends. She tells me she does improv, and has been wondering why the hell she is at this audition. We both just laugh and laugh, causing somewhat of a spectacle of ourselves.

"It's weird," I say, "each girl is in the room for at least fifteen minutes."

"Maybe that's how long it takes them to figure out how to disrobe," replies Irina, deadpan.

My name is called. I feel like I'm doing the Walk of Death down to the audition room. Irina wishes me good luck. I enter the small florescent-lit room, and a big-boned woman is standing there with a video camera. It looks just like any movie audition I've done, thank goodness. That thought relaxes me.

Um... so quick? Shouldn't we talk about the weather first? I think. Or maybe you can tell me why nearly everyone else auditioning is a supermodel? Can we start there? (Just kidding.)

I just smiled and took off my dress, as casually as if I was tying my shoe.

So here I am. I'm basically naked. Standing here. Lace tong, strapless bra, florescent light, the absolute most unattractive light to be photographed in on the planet. Just standing. Doing my thing. Awkward.

"Heels too," she chirps.

Great. Nothing like standing there in my bra and underwear and no heels! Doesn't she know a woman's leg looks better in a heel? Oh fuck it. Off they go.

She asks me to put my long hair up in a ponytail and to give her a great big smile. This lady is taking away all my assets!

Now my hair is up, my pointy ears are sticking out and I'm smiling. Not only am I barefoot, my toenails are seriously chipped. Whatever, it's not like they're going to film my feet. I feel like I'm at a comedy audition. Nothing, absolutely nothing is sexy about this.

"Show your profiles," she insists, not even looking at me, just at the monitor. Profiles... profiles... oh, right she wants me to turn to my right, left, and turn around so my back side is exposed.

She picks up the video camera and moves closer, and starts to film my body. She begins at my toes and inches her way up slowly up to my head, and then repeats the action to my backside—chipped toe nails and all.

I'm standing in a "modeling" position, I think. I have one leg bent like they do in the Miss USA Pageant, and I'm standing there so long with my leg bent I'm having a hard time keeping my balance. So I'm shaking, sucking in my stomach so hard and smiling.

As I dress, I think, what a life I've chosen for myself. Oh, the glamour of chipped toenails in closeup.

On my way out I give a thumbs-up to my friend. It really wasn't that bad. It could have been worse. It always could be worse, right?

Actually, come to think of it, where do these tapes end up?

Alexis Peters will appear in the upcoming Garry Marshall film "Valentine's Day." On the ScyFy Network, she was Ingrid in the original film "Grendel," and Sif in "Thor: Hammer of the Gods," which debuted in spring 2009. Other TV work: "Days of Our Lives," and the FOX pilot "Faceless." Stage roles include "Summer and Smoke" and the 2004 ADA award-winning "Moonchildren." Alexis can be reached at alexisbackstage@yahoo.com.