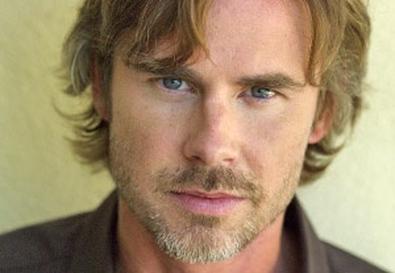 "It's Jungian," says Sam Trammell nonchalantly. He's describing how his dreams inspire his acting. He's equally offhand when explaining how as a college student he planned to become a theoretical physicist but was forced to lower his sights: "I was advanced, but I wasn't a genius, and at Brown University I majored in semiotics, which refers to the interdisciplinary study of sign systems and how they work, including linguistic theory, Marxist theory, psychoanalysis, feminist theory, and film theory. I did most of my work in contemporary French philosophy."

He certainly never imagined himself an actor, let alone one who plays a shape-shifter on a hit HBO show about vampires. The series is "True Blood," created by Alan Ball based on the novels of Charlaine Harris, and Trammell is enjoying the unexpected development. He admits that early in his career, he had a condescending attitude toward television. He would not have considered auditioning for the small screen. But he now thinks TV writing—especially for cable—is far superior to most film writing, calling our current era a golden age for television.

His featured role on "True Blood," now in its third season, is a career turning point. Appearing in Eugene O'Neill's "Ah, Wilderness!" with New York's Lincoln Center Theater was pretty good too, he admits. After all, it earned him a Tony nomination. But his current gig has a huge weekly audience that crosses demographic lines, he says.

"It's a totally original show, a character drama set in a fantastical world. Usually genre dramas focus on genre, but Alan Ball is a genius and he writes about character. He is wired into the Zeitgeist and bridges genres. The show is campy, funny, serious, sexy, bloody, and it's a gothic romance. And Alan casts really well. With the exception of Anna Paquin, the cast is largely an eclectic group of unknowns, which makes it easier for the audience to buy into this world."

For Trammell, the challenges of the show are twofold: the nuanced complexity of the writing and mastering a Louisiana accent. He is, curiously enough, a New Orleans native and grew up all over the South. Nonetheless, he says, he hasn't spoken with a Southern accent in 25 years: "It's not new to me, but I have to go back to it and put it on and then have to keep it up."

Trammell decided to become an actor while performing in a college play when he realized that "I wanted to stop thinking," he says. "I wink when I say that. You have to be smart to be a good actor. But acting took me out of my head and back into my body." It also brought him to New York, where he bought a copy of Back Stage and hit the ground running, attending as many open calls as he could. "That's what all the actors did," he says.

But Trammell also did what most actors don't. Indeed, it's ill-advised: He dropped off headshots and résumés in person at casting offices and agencies around town. He was not shown the door. In fact, he freelanced with a couple of agents, and when he got an audition followed by a screen test with Al Pacino for "Scent of a Woman," one of the agencies signed him.

Regional theater productions and indie films followed. "I took whatever came along," he says. "These were low-budget films but really good experience, and I got better each time." He made his Off-Broadway debut, playing an out-of-control gambler, in Patrick Marber's "Dealer's Choice" and then played a gay man in Kevin Elyot's "My Night With Reg." "New York is a club," Trammell says. "You have to earn your way to do theater in New York, unless you do TV," he says with a laugh. "I auditioned for Lincoln Center for years before I got 'Ah, Wilderness!' "

Trammell decided to try his luck in Los Angeles seven years ago and relocated to the West Coast. "L.A. helped my career," he says. "L.A. is a one-horse town. It's all about the TV and movie business. That's good because it keeps you focused. It's bad because there's no outside energy coming in. In New York, there is more stimulation. It's a whole different vibe. There's a street life. Also, there's more respect for theater. In L.A., theater is generally not on anyone's radar, and in L.A. there is no humidity, and initially that feels fake."

Climate challenges notwithstanding, Trammell rolled up a number of TV credits. After Ball saw his audition tape for "True Blood," he arranged for Trammell to test for the network executives. "These tests are very stressful for everyone," the actor says. "It's basically testing whether the actor can handle the pressure. Before you go in, you have to sign a contract that says you'll be committed for five years. You learn your salary and deal points. Reading and signing legal documents before an audition is very heavy. Then you go in and there are 20 to 25 executives sitting in big swivel leather chairs. Everyone is nervous. Nobody likes it. And it's up to the actor not only to kill, but also to make everyone feel okay. You do your best to keep your cool. For 'True Blood,' I read with the casting director, and I felt it went fine."

"Fine" is an understatement. Within four hours, Trammell heard that he'd gotten the role (usually it takes several days to get a response). "I was in my car and I literally screamed," he recalls. Since then he's had a blast and is fascinated by the show's appeal. Vampires are in vogue today, not unlike superheroes are in the film world, he says. But he is not convinced that the escapist phenomenon is only a response to hard economic times. "Perhaps fantasy is just the antidote to the 24-hour news show," he says.

Either way, Trammell is hopeful that "True Blood" will lead him to high-quality movie roles. In the future he'd also like to try his hand at directing, and he wants to return to the stage. "I'd love to act in Chekhov and Ibsen," he says. You'd expect no less from him.