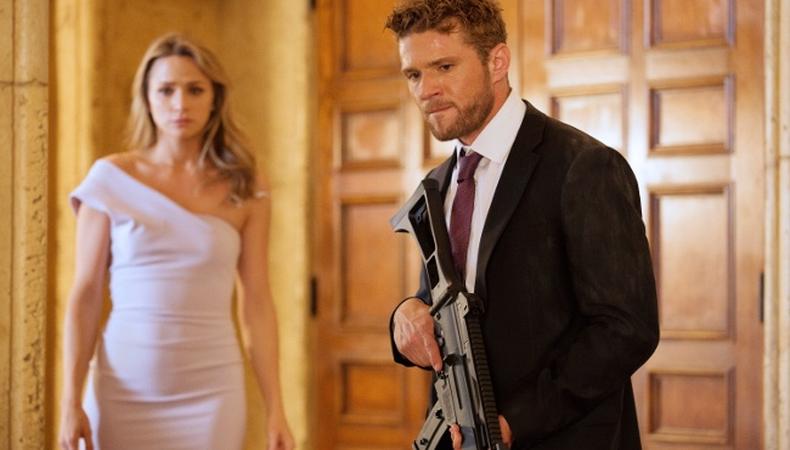 As the military and weapons supervisor for USA’s “Shooter,” Steve Seapker uses his expertise to make sure the action-thriller’s actors, including Ryan Phillippe, look and feel comfortable using firearms.

Seapker cut his military teeth in the real world.
“I was in the Marine Corps and I have a sniper background. I was also a police officer for a long time. [Getting into the industry] was not one of those things where I was a PA and I climbed the ladder because I always knew I wanted to be in the entertainment business. It was an opportunity that came about and was completely unexpected, but I jumped in with both feet.”

Actors who are game are appreciated.
“When I started out in the business, I’d never worked with talent before. I thought, Oh my god, how’s Ryan gonna be? I can train people to do this stuff, but these Hollywood personalities, I didn’t know how it would be. My fears were, fortunately, unfounded. I’ve spent so much time with Ryan and Omar [Epps], we’ve developed a friendship.”

Training builds confidence.
“When you start training actors with real equipment, their confidence level goes through the roof. Then, when we’re on set, I can say, ‘I need you to do X, Y, and Z,’ and it’s shorthand. I don’t have to sit them down. They know how to do it and it allows them to really focus on their performances, because the physicality is there.”

His position requires knowledge of production.
“It’s interesting adjusting my teaching and training style to accommodate the creative process, too, because if you’re just focused on your piece—training with firearms and tactics and that sort of thing—and you don’t take time to learn production, you don’t take time to sit down with the director of photography and learn a little about cinematography, what’s going to be in the frame, what they’re going for, what the lighting is, then you can’t really help an actor with their performance, because you’re coming at it from the wrong perspective.”

Accuracy is vital for the story.
“We’re trying to tell a story visually. We want to be technically correct, you bet, because those are the details that people look for and that you want to provide so that they buy into the story and they agree to buy the ticket and take the ride and suspend disbelief a little bit. We’re not making a documentary, but we want to pay as much respect to the reality as we possibly can. The majority of our audience, they look for that stuff and they know that stuff and they will check out in a heartbeat if you’re not getting it right.”

Background and day players are instrumental.
“As far as other talent that comes in, day player actors and guest stars, even our stunt actors and our background people, I’m here on set every single day so that when we rehearse and when we block and do all that good production stuff, I’m there watching the monitors and making sure everything looks correct. If it doesn’t, I’m flying them notes and we’re making changes. It’s a real collaborative, creative experience.”

Actors should never fib about experience.
“You have to be real about your experience. Sometimes we find with background actors, everybody is looking for their shot. Everybody is looking for their moment. Sometimes when you get in a room of background guys and gals and you’re looking for who has firearms experience, who has experience in the military, you’ll have people who are just gonna raise their hands because they want to get their break, but it’s not helpful if that’s not true. I would rather take somebody who’s honest and says, ‘Look, I don’t know anything about it but I’m gonna give you 100 percent.’ ”

Safety comes first.
“The main thing when you’re working with firearms on set—it’s just like working with any other effects like explosives: Safety is first. Yeah, you want to look cool and professional and like you know what you’re doing and really look like the hero, but if there’s something you’re not comfortable with or you don’t understand fully, you have to communicate with me. That’s the No. 1 thing with firearms. Not only just for production’s sake, but for character’s sake, as well. If you’re supposed to be a character who uses firearms regularly in your line of work, then you are professional with them. You’ve got to treat these things with respect. People can get hurt easily, so pay attention.”

Casey Mink
Casey Mink is the senior staff writer at Backstage. When she's not writing about television, film, or theater, she is definitely somewhere watching it.
END_OF_DOCUMENT_TOKEN_TO_BE_REPLACED