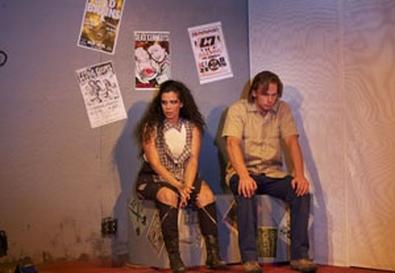 Photo Source: John Beverly
Some people shouldn't wear leather pants. Actually, no one should, but especially not Garrett Leskin (Michael Bryan Hill), the puppyish Kurt Cobain–worshipping singer in Randall Colburn's rock-'n'-roll drama "Verse Chorus Verse." Said pants just don't go with his bright-eyed, dorky persona, and they bag awkwardly on his short and unprepossessing legs. Desperate to become "the voice of his generation"—and unaware that that title is foisted on one, rather than deliberately sought after—Garrett embodies many of the problems of this show, which just isn't as cool as it wants to be.

The central character isn't Garrett; it's Polly (Lorraine Rodriguez-Reyes), subject of the Nirvana song of the same name. She carries on a creepy affair with a man named Gerald Friend (Forbes March), whose physical resemblance to Cobain is presumably not coincidental. Garrett, who wants to prove that Cobain's death was really a murder, also draws the haunted girl into his orbit, which includes the prime suspect, Satanic heavy-metal dude Mason Dwyer (Michael Mallard).

For all its dropping of band names and wrestling with familiar indie-rock issues (like whether it's a sellout to sign with a major label), the play doesn't muster much rock-'n'-roll cred. I was interested to see that March is a veteran of such series as "All My Children," "One Life to Live," and "As the World Turns," because the whole tone of the play is reminiscent of daytime serials. By that I mean airless, humorless, and inauthentic, with lots of dialogue leading nowhere in particular. Arguably, it also gives too much credibility to the nonexistent mystery of who killed Kurt Cobain, whose death, like all premature celebrity deaths, has led to conspiracy theories of varying ludicrousness.

As far as I can tell, Oswald shot Kennedy, Shakespeare wrote Shakespeare, and Kurt Cobain blew his face off with a shotgun. He deserves a livelier and more compelling tribute.