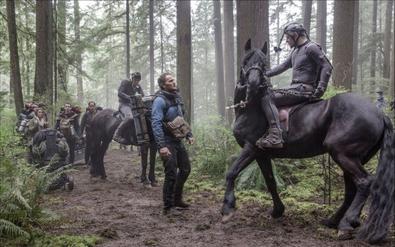 When casting a film or television show, an actor’s appearance is essential to capturing the right character. But thanks to technological advances, when casting for the new “Dawn of the Planet of the Apes,” director Matt Reeves was able to focus more on talent than looks, on whether his actors could cut to the “emotional truth” of their character, and maintain their energy when acting to an empty space while covered in motion capture equipment.

“I’d worried that there’d be some sort of technical thing that would keep me from doing what I normally do, but I discovered that because performance capture is all driven by performance, that Step 1 was the same Step 1 that had been in everything I’d ever done, which was just walking onto the set with the actors, talking to Andy [Serkis, who plays Caesar in the film] and saying, ‘So Andy, where does it feel like you would stand in this?’ ” says Reeves, who also directed “Cloverfield.”

“The complicated part was after I had staged a scene and shot it the first time with Andy playing against the other actors, then I had to go back and do a number steps that were just crazy; like I had to shoot the shot again without Andy, I had to have the camera up, ready to follow nothing around, or if Jason Clarke is playing opposite him, even though he might have just had a very emotional moment with Andy, I need him to play that moment again but without Andy, and that’s what’s going to be in the movie; that was a challenge of the likes I’d never quite experienced before.”

Reeves was also challenged in post-production, where he says staying attuned to an actor’s performance in order to build a shot around it became a fractured effort when he realized he needed to “block out” the seams, so to speak, of this technologically based film—the missing actors and elements, the motion capture or “mocap” outfits, the lack of effects.

But the convincing performances are a perfect marriage between art and science, a testament to the skill of their animators, and to the cast of “Dawn,” which includes Serkis, Clarke, Judy Greer, Gary Oldman, Keri Russell, Toby Kebbell, Terry Notary and others. “Terry Notary, who plays Rocket, is also our motion specialist; he’s a former Cirque du Soleil performer and he taught all the performers—including the stunt performers, who were parkour performers—to move and act physically like apes,” says Reeves about the film that employed over 150,000 people. “That’s a particular skill; you have to really be able to unlearn the kind of behaviors that we have as a human. He’s almost like an ape zen master, just getting people to let go. He spent the day with Judy [Greer] and I called him afterwards and I said, ‘So! Do we think she can be an ape?’ He said she’s very ape-y, she can be an ape.”

While “ape-y” was probably never a compliment before “Planet of the Apes,” Reeves says his cast was chosen first and foremost for their abilities, but received more training later at an “ape camp” to achieve the physical acting on an individual level, as well as as a tribe The realistic performances gave Weta Digital, the visual effects company responsible for films including “Avatar” and “The Lord of the Rings,” the basis to build a realistic world. Reeves says animators entered long discussions to ensure an accurate capture of, for example, complex emotions registering on Serkis’ face.

“You’re just fleshing out all of these levels,” explains Reeves. “When you’re doing these shots, all of the shots come with their version number. You say, ‘Yeah, that looks good,’ and then you final it, and then comes animation and those numbers add on top. Then it takes like another 60 iterations from animation to get to where it’s supposed to be, so now you’re at 128. Well, you work your way through these shots and by the time you’re done, they’ve done motion simulation, and moisture simulation, and lighting and rendering—the shot may have gone through like, 200 versions.” Reeves says one shot on top of a tank with a 360-degree view of a battle underwent 1,030 versions, and took over a year to make. When it was finally approved, Weta “erupted into cheers and they popped champagne” to celebrate.

Throughout the making of the film, Reeves stayed wary of the “spectacle becoming so big that it wags the dog” and loses the strand that holds it all together: the intimate look at the hero Caesar and his family, and what Reeves calls the “mythic western” of two species vying for the same land, trying to coexist.

“Dawn of the Planet of the Apes” hits theaters today, July 11.

Check out this week's cover story, “The Year of Judy Greer,” with the “Dawn of the Planet of the Apes” actor!

Briana Rodriguez
Briana is the Editor-in-Chief at Backstage. She oversees editorial operations and covers all things film and television. She's interested in stories about the creative process as experienced by women, people of color, and other marginalized communities. You can find her on Twitter @brirodriguez
END_OF_DOCUMENT_TOKEN_TO_BE_REPLACED