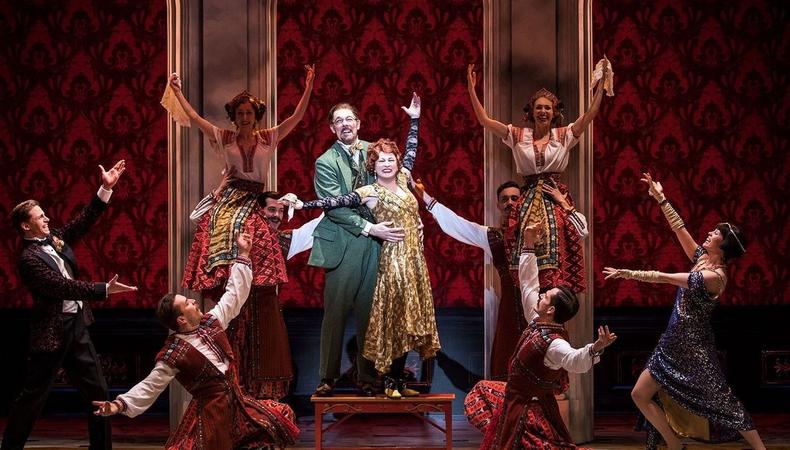 There’s scene-stealing and then there’s Vicki Lewis in Broadway’s “Anastasia.” The veteran actor, in the role of Countess Lily, delivers a second act song-and-dance sequence so seductively outrageous it ends with both she and the audience gasping for breath. And Lewis, who joined the Terrence McNally hit back in March, is having as much fun in the track as it appears. She tells Backstage about the added zaniness with which she’s imbued the role and how replacement actors can play to their strengths.

How did this role initially come onto your radar?
It happened so out of the blue. I was planning to come [to New York] in May because I felt like it was time to come back again. I was just going to come without a job, and sort of put my feet back in the water and see old friends and do theater again. I got an appointment for it, I went on tape, they flew me in, I had a callback, and I was booked in a really short amount of time. It’s a gift; this job is a gift.

What was the rehearsal process like, coming in as a replacement?
My rehearsal process consisted of myself, [stage manager] Bonnie Panson, and [swing] Dustin Layton in a room with the pianist for just shy of two weeks. Dustin would play 73 characters, Bonnie would play 47 characters, and I would go through it over and over again. It’s a testament to how well those two know the show and how good they are at their jobs. I could not be doing what I’m doing right now without Bonnie or Dustin.

How is replacing different from originating roles?
You are constrained by blocking to a certain extent. You can’t come in and flip the thing upside down because everyone else has been doing it a certain way. It’s really about, “I have to hit A, B, and C marks, and then I’m going to color it in differently with my own nuances.” Whereas when you create something, you’re in a dialogue with your scene partners, but here you’re coloring it in kind of on your own. [When originating], it’s a dialogue and a groupthink and a conversation with the director, and with [replacing] you’re trying to color within existing lines.

For any role, what is your process for making the part your own?
Thankfully at this point in my acting career, I know what my strong suits are. For example, I watched the show, and I thought [original Countess] Caroline O’Connor was absolutely wonderful, so I took the bones of what Caroline did and I saw the things that would work on me, and I went, “Oh, that’s not going to work on me,” and I nuanced it with what I do, which is, I think I play her a little more outrageous in the flirting and sort of zany quality. She was more grounded and it’s hard to compare, but I basically watched it and took what would work on me and changed what wouldn’t. And then, trial and error.

Do you have any advice for future replacement actors?
The basics: know your lines, know your song before you get there. If you can, create whatever relationships offstage with your scene partners that you can, grab as much time with them as you can outside of your own sort of isolated rehearsal process. But more importantly, trust that you’re there for a reason. If people don’t feel like they’re connecting with you, if you feel sort of isolated in the process, just trust that in time [it will happen]. Look, the people are tired, they’ve been doing it for a year and a half, they’re not gonna be able to sort of pat you on the back and tell you how wonderful you are. You’ve got to find your people, and if they’re not in that cast, hold on tight to those people in your life, your support system, and keep them close until you’ve got your sea legs. Don’t beat away at your insecurity, don’t let it get the best of you because it’s hard to maintain that without somebody tearing it down.

What is the best part of being a replacement in “Anastasia” on Broadway?
The best part is, I’ve never been happier in a group of people. The best part is the company. The best part is sitting and reading during act 1 and eating candy and bothering everyone offstage, and then going on and acting foolish in act 2 and playing with John Bolton. There’s no negative downside to this job. And [director] Darko Tresnjak is a guy who really cares about kindness. It’s number one on his list, the humanity and the kindness. I think for that reason, he’s assembled a group of people who shine in that way.

Casey Mink
Casey Mink is the senior staff writer at Backstage. When she's not writing about television, film, or theater, she is definitely somewhere watching it.
END_OF_DOCUMENT_TOKEN_TO_BE_REPLACED