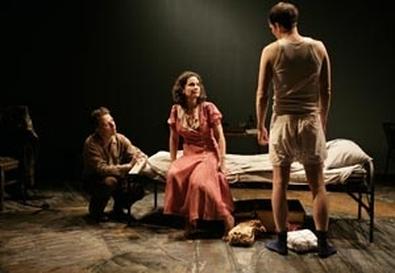 As audience members file into the Pearl Theatre Company's intimate space for a revival of Tennessee Williams' rarely seen 1977 play Vieux Carré, they may notice a solitary figure seated at a kitchen table on Harry Feiner's suggestive set depicting a New Orleans boarding house. It's an older woman in a ratty bathrobe with her hair askew. She clutches a cup of coffee and stares into space with a desperate expression. This is Mrs. Wire (Carol Schultz), the irascible, domineering landlady who terrorizes her tenants with screeching demands but is achingly lonely. The loneliness etched on her face is like a disease, and all the occupants of the house suffer from it. Heartbreaking isolation is what Williams wanted to capture in this autobiographical work, and director Austin Pendleton sensitively exposes it like a physician treating a charity ward full of society's outcasts.

When the play opened on Broadway, it was savaged by the critics as a second-rate effort by a played-out playwright and lasted less than a week. Reviewers accused Williams of ransacking his old bag of tricks. Yes, the boarding house residents have traits in common with Blanche DuBois (the delusional lady down on her luck), Stanley Kowalski (the coarse but charismatic brute), and Amanda Wingfield (the bossy mother figure). But despite these echoes of past works and some overwrought sex scenes, Williams' trademark compassion for the weary and the lost shines through. The Pearl company illuminates their struggles with intensity and restraint.

Schultz keeps Mrs. Wire from becoming a comic monster by playing her outrageous actions as a need for company. Rachel Botchan and Joseph Collins avoid Blanche-and-Stanley stereotypes as a pair of mismatched lovers. George Morfogen skillfully underplays the tubercular gay painter Nightingale, earning big laughs as well as tears. Sean McNall has the most difficult role as the Williams-as-a-young-man figure, simply called the Writer. Not only does he serve as narrator, often delivering long expositional monologues, but he's also a silent observer in many scenes. McNall fulfills both these functions—as well as conveying the fledgling author's awakening sexual and creative urges—gently and gracefully.

Though this is minor Williams, the Pearl gives Vieux Carré a major production.