A View From the Bridge 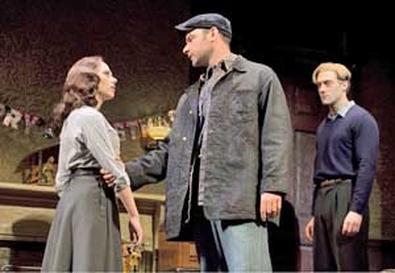 Eddie Carbone, the tragic longshoreman of Arthur Miller's "A View From the Bridge," has become one of those roles actors long to play, like Hamlet, Blanche DuBois, and Miller's own Willy Loman. Eddie's unspoken incestuous longings combined with the fierce defense of what he considers his honor affords numerous opportunities to express repressed passions. When they are unleashed, the stage can potentially erupt with an elemental force. Since Van Heflin originated the part on Broadway in the 1955 one-act version, memorable Eddies have been created by Anthony Quayle (premiere of the two-act version, London, 1956), Raf Vallone (film version, 1962), Robert Duvall (Off-Broadway revival, 1965), Tony LoBianco (Broadway, 1983), Michael Gambon (London, 1987), and Anthony LaPaglia (Roundabout Theatre Company, 1997). Now Liev Schreiber, one of the few American star-level actors to return to the stage on a regular basis, sinks his teeth into this meaty steak of a character and has a regular feast.

His Eddie has a vulnerability and thoughtfulness often overlooked. You can tell he not only harbors sexual urges for his wife's niece Catherine but also loves her like a father. These conflicting emotions play across Schreiber's face as Catherine explains her growing love for Rodolpho, an illegal immigrant the family is protecting. Also watch as Eddie moves to a pay phone with the intention of turning his rival over to the authorities. His physical behavior is informed by his knowledge of the consequences of his actions: If he makes this call, he will be branded an informing rat, a fate worse than death in his clannish Brooklyn neighborhood. He's literally sickened by what he's about to do, but his passion drives him on. The whole performance is filled with such intimate details and grand yet believable gestures.

Scarlett Johansson matches Schreiber's intensity as the inexperienced but determined Catherine. This film star makes an impressive Broadway debut, clearly conveying what this girl wants—to be a grown woman—and pushing against the only obstacle in her path: her overly attentive uncle. As Eddie's loving but agonized wife, Beatrice, Jessica Hecht stakes her claim as one of our most sensitive portrayers of downtrodden women. Her climactic howl of despair rings through the theater and tears at your heart.

Michael Cristofer makes a real person out of the dramatic-device role of Alfieri, a lawyer who also serves as the play's narrator. Morgan Spector's Rodolpho combines boyish overexuberance with steely determination to make it in America. Spector's assured performance is all the more remarkable given that he stepped into the role relatively late in previews after Santino Fontana had to withdraw because of a concussion he suffered during an onstage fight. Corey Stoll exudes masculinity and Old World integrity as Rodolpho's protective older brother Marco.

Director Gregory Mosher wisely keeps the staging simple so the dramatic fireworks blaze all the brighter. Set designer John Lee Beatty's row of brownstones towers over the players like a menacing giant as they enact this modern version of a Greek tragedy.