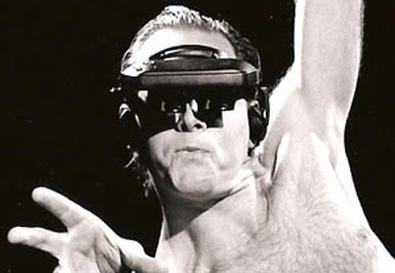 Photo Source: Courtesy of Author
How is virtual reality changing our idea of reality? Dawson Nichols tackles the question in "Virtual Solitaire," for which he is writer, director, and one-man cast. Although technology has evolved exponentially since the play's premiere in 1997, Nichols suggests that its isolating effects have endured—or increased.

With its own techno-babble language, "Virtual Solitaire" is an initially impenetrable tangle of words, but the confusion gives way to a captivating stream of ideas, scenarios, and atmospheres, thanks to Nichols' masterful ability to embody a character. His parade of outcasts and lonely souls—a senior citizen, a death-row inmate, a hermit with a grudge—is a wonder, and the uncredited but effective lighting transforms the blank stage into a series of distinct environments in which they roam. Although the play contains too many competing threads to offer a coherent idea of our relationship with technology, Nichols' performance leaves you with a disquieting feeling that lingers in the mind.