The Voice Goes On 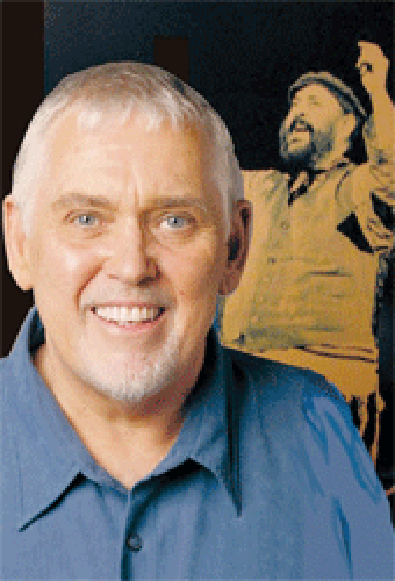 Jim Brochu is a strong believer in kismet. A recurrent theme in his plays--and his conversations--is the proliferation of miracles in show business. Two years ago, when Brochu and his life partner, Steve Schalchlin, accepted an Ovation Award for the autobiographical musical they co-wrote and co-starred in, titled The Big Voice: God or Merman?, the presenter was revered Broadway songwriter Jerry Herman. Brochu considered this a full-circle moment. As a young kid who dreamed of a showbiz career while selling orange drinks at Broadway's St. James Theatre during the original run of Herman's 1964 classic Hello, Dolly!, he watched the show from the back of the house hundreds of times. In his wildest dreams, this eager whippersnapper from Brooklyn never imagined that the legendary Herman would one day be shaking his hand and honoring him for his work on a new musical.

For Brochu, whose résumé in multiple mediums is mind-boggling--actor, playwright, director, book author, agent, producer--a lifetime of acclaimed accomplishments doesn't mean he can now relax. He's currently embarking on what he admits is the biggest acting challenge of his life: He wrote and performs in Zero Hour, a two-hour solo play charting the glorious yet tumultuous life of an actor considered by many to be among the greatest of the 20th century, Zero Mostel (1915–1977). Filling the larger-than-life shoes of an eccentric, tortured, brilliant creative giant--who gained fame starring in the musicals Fiddler on the Roof and A Funny Thing Happened on the Way to the Forum and Mel Brooks' 1968 film classic The Producers--is a gargantuan task.

When Mostel's son, actor Josh Mostel, asked Brochu why he wanted to do a show about his father, the playwright-actor had a simple answer: "Because he's a great character--famous or not, real or not. If he hadn't already existed, we would have had to invent him." Brochu loves to mimic the famous Mostel bellow; if the rest of his performance matches the authenticity of this bit, audiences are in for a treat. "There was a previous show about Zero," says Brochu. "Josh said it wasn't very good. It was too flattering. Zero had a very dark side, and we address it in the play. At the end he says that he is a very angry man. He says that he has been excluded as a man, a Jew, and an entertainer. We go into the [McCarthy] blacklist. Zero compared himself to Lucille Ball [who, unlike others, easily escaped career damage from the blacklist]. He says they could have called her show 'I Love Lenin' and the audiences would have forgiven her." Mostel was bitter that his and others' careers experienced more-destructive fallout from the hysteria.

Brochu adds that another reason for Mostel's anger was terrible and constant pain in his leg following an accident in which he was hit by a bus; for years, Mostel danced and cavorted onstage, then limped off into the wings. Yet another incident that added to Mostel's resentments was director Norman Jewison's casting of Topol in the 1971 film adaptation of Fiddler on the Roof. Says Brochu: "When later on Jewison called Josh to offer him the part of Herod in the film Jesus Christ Superstar, Zero yelled out, 'Tell him to cast Topol's son.'"

Mostel has often been criticized for his explosive temperament on the job and what many considered a lack of discipline onstage. Notes Brochu, "In a line in the play, Zero says that a great musician, an Arthur Rubinstein, will put a piece of sheet music in front of someone who will play every note as written, but does it come out the same every night? He says, 'I'm not a metronome.'" According to historians, although critics, playwrights, actors, and directors often balked at the performer's audacious straying from the script during performances, audiences loved it. Brochu describes an incident in which Mostel was doing a performance in St. Louis in a 7,000-seat outdoor theatre in a park on the Fourth of July. Brochu repeats Mostel's line from the play: "Fireworks and explosions were going on; what was I supposed to do, not notice them? I grabbed my stomach and apologized for having had a Mexican dinner."

Brochu elaborates, "Zero always said he never changed a word or comma but that he might add something once in a while. In Forum, he once announced the results of the Sonny Liston–Floyd Patterson fight but claimed that he gave it a Roman context, saying the knockout occurred in Round XII. He got very angry when people were upset about his spontaneity. He said he wasn't the kind of actor who could just be a movie every night, asking if he was so terrible in Forum, why did [its producer] Harold Prince later cast him again in Fiddler?" Still, history tells us that what was creative genius to some registered to others as a lack of discipline and respect.

Finding and conveying all of the nuances of this complex character, maintaining his intense energy for two hours, and most of all, doing justice to a great artist are Brochu's concerns as he tackles this daunting undertaking. "There were so many levels of things going on in his life," he notes. "He was so mercurial." Brochu had a long acquaintance with Mostel, having been introduced to the famous actor by Brochu's mentor, actor David Burns, who appeared with Mostel in the original Broadway production of Forum. Brochu says the director of Zero Hour, Paul Kreppel, also knew Mostel, which is another boon to presenting a credible depiction of the man's essence.

Brochu and songwriter Schalchlin initially nurtured The Big Voice and The Last Session--their semiautobiographical Off-Broadway musical hit--in L.A. workshops before playing here and elsewhere. Following the respective premieres, each show won theatre awards in various cities where they were performed. Both continue as popular offerings in theatres nationwide. One of Brochu's plays, The Lucky O'Learys, caught Ball's eye in the 1980s. She considered turning it into a television pilot for herself and Audrey Meadows before she fell ill. Brochu became a close friend to Ball, spent a great deal of time with her, and following her sudden 1989 death, wrote a book about the afternoons he spent conversing with her.

As a young man growing up in New York during the golden age of Broadway, Brochu had several showbiz heroes, and he has enjoyed the good fortune of meeting most of them--and working with many. Besides exploring the personal and professional relationship between Brochu and Schalchlin, The Big Voice demonstrates how Broadway superstar Ethel Merman had a strong influence on Brochu's life and career paths, in a mystical fashion. The first lines of the play draw a link between show business and religion. The ethereal presence of Merman--whom Brochu also knew--becomes a spiritual symbol for the journey of the showbiz couple Brochu and Schalchlin.

Over the years, Brochu has initiated countless projects and driven them to fruition. "You can't sit around waiting for the phone to ring," he remarks. "Because it won't. I am always telling actors and would-be screenwriters and playwrights to get out there and do it for themselves. When I wrote The Last Session with Steve [inspired by Schalchlin's emotional and physical triumph over AIDS], I didn't write a part for myself as an actor. I had stepped away from acting about 20 years earlier, thinking maybe I'd be happier on the other side--directing, producing, and writing--and then found out I really wasn't. I live on a stage, love being on a stage, so instead of waiting around for Tennessee Williams to write something for me, especially now that he's dead, if God has given me the talent to write something for myself, then I better well do it. It's kind of like that old adage: If you build it, they will come. If you write it, it will get produced."