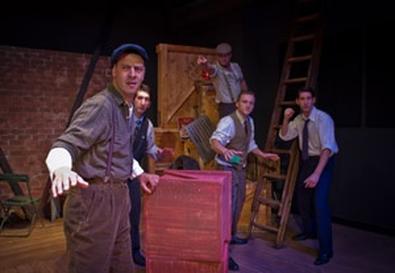 When Clifford Odets' electrifying early plays "Waiting for Lefty" and "Awake and Sing!" first appeared in the 1930s, they lit up the theatrical sky. But almost before the initial glow faded, the cultural establishment began trying to count Odets out—a fact he was well aware of. "We cancel our experience. This is an American habit," as one of his characters asserts. He was called "dated," and sentimental, and told "if you want to deliver a message, send a telegram." By the time of his death in 1963, Time magazine published a dismissive obituary headlined "Odets, Where Is Thy Sting?" Yet his plays keep getting produced, and his dialogue remains the most vivid, acute, and original produced by any American playwright.

"Waiting for Lefty" was an unabashed bit of rabble-rousing agitprop theater, about a taxi-drivers' strike in 1934, and with the passing of the Depression, it did seem dated. But now, in the throes of another recession-cum-depression, it's relevant all over again, as this production, directed by Don K. Williams, demonstrates. It depicts a bloody class war that's still going on, several Republican legislatures currently trying to strip workers of the right to collective bargaining.

The play casts us, the audience, as the Union's rank and file, and this is emphasized by Michael Allen's shabby/picturesque Union Hall setting, which places the actors above, behind, and among us. Adam Bitterman launches the play as Harry Fatt, the corrupt union boss who attempts to stave off the strike, with hired thugs (Ryan Moore and Ben Whalen) to back him up. Jesse Steccato earns sympathy as the World War I veteran, crippled by shrapnel, who comes home from work to find his kids hungry, his furniture repossessed, and his wife (Katharine Brandt) in rebellion, threatening to leave him unless he takes a stand. Jeremy Ferdman shines as a man threatened by his cynical boss (J. Claude Deering) with the loss of his job if he refuses to spy on a fellow worker. And Chase Fein scores as a young man who leaves the girl (Emily Jackson) he loves because he can't afford to marry her.

Johnny Patrick Yoder is the craven company spy, who's unmasked by his own brother (Dan Evans). Jacques Freydont and David Lengel are a pair of doctors, prevented by political influence from doing their jobs, and Darren Keefe delivers a highly stylized performance as Agate, the impassioned strike leader. Director Williams keeps the action dynamic and volatile, and his intentions are carried out with gusto by the large and able cast. Kelly Graham's authentic-seeming costumes enrich the Depression-era flavor.