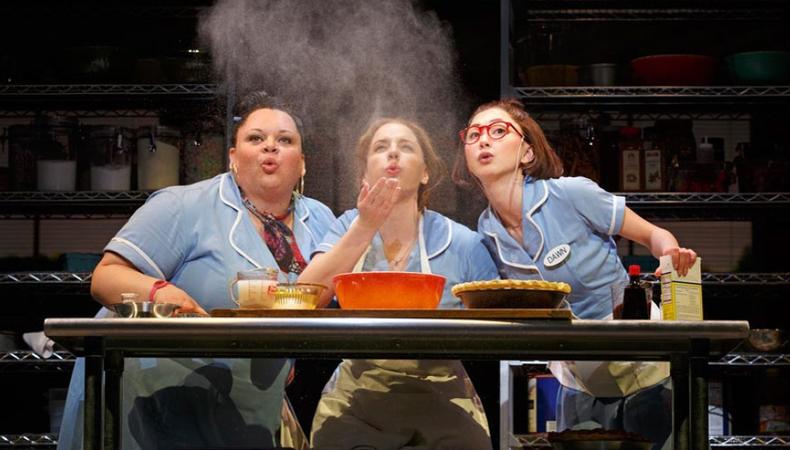 “Waitress” meets “Waitress.”
The 2007 indie film “Waitress” inspired the Tony-nominated musical of the same name, with a score by Grammy nominee Sara Bareilles. The two beloved entities will finally meet at the Rooftop Cinema Club’s screening of the movie on Aug. 14, which will be preceded by a pre-showing performance from current cast member of the musical, Caitlin Houlihan. You got that? Head to YOTEL in Hell’s Kitchen and treat yourself to this freshly baked evening. (Tickets: $33–$39)

Culture your canine.
The idea that New Yorkers are snobby is a gross misconception. That being said, an art exhibit designed specifically for dogs is coming to Brookfield Place and is sure to be a barking delight. The free event, adorably called dOGUMENTA, is a curated art show for dogs (that is neither by or about them), and will include works that appeal to pup sensibilities through sound, sculpture, kibble, and squeaky toys. Make sure your best furry pal isn’t the dog park's resident philistine—head down to the Financial District Aug. 11–13. (Free)

Vogue your way to Brooklyn.
Celebrate the birthday of the queen of pop at Brooklyn Bowl on Aug. 12. The 14th annual Madonnathon returns for a night of singing, dancing, and bowling along to the massive songbook of the one and only Madonna. This year’s party will be hosted by Cathy Cervenka and Rupert Noffs and, yes, Madonna-inspired wardrobe is encouraged if not required. (Tickets: $15–$18)

Journey to the past.
Several cast members from Broadway’s hit new musical “Anastasia,” based on the film of the same name, will perform in an acoustic concert at the W Times Square on Aug. 13. The evening, part of the Broadway at W Sunday evening series, will feature Zach Adkins, Sissy Bell, Molly Rushing, Ian Knauer, and several others. Better yet, standing room tickets are completely free. (Free–$20)

Watch the Hong Kong Dragon Boat Festival—from shore.
The 27th annual Hong Kong Dragon Boat Festival sloshes back to Flushing Meadows Park in Queens on Aug. 12 and 13 and is once again entirely free for spectators. The rain-or-shine races, based on a legend of the ancient patriot-poet Qu Yuan, will be encircled by an international food court, with delectable offerings spanning barbecue, shaved ice, and a variety of bao. (Free)

New York actors, be sure to check out Backstage's NYC auditions!

Casey Mink
Casey Mink is the senior staff writer at Backstage. When she's not writing about television, film, or theater, she is definitely somewhere watching it.
END_OF_DOCUMENT_TOKEN_TO_BE_REPLACED