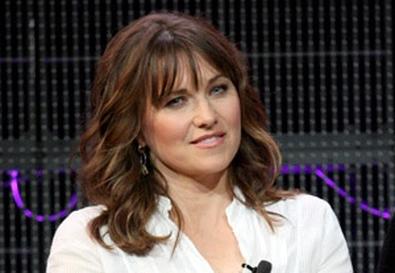 Lucy Lawless doesn't mind being typecast. The actor, who became a household name thanks to the 1995-2001 TV series "Xena: Warrior Princess" and who can currently be seen on Starz's "Spartacus: Gods of the Arena," admits that playing Xena may have pigeonholed her into repeatedly being cast as the warrior in period pieces. But, the New Zealand-born Lawless notes, "What am I going to complain about? How many actresses work as much as me?"

Lawless auditioned to play an Amazon queen in the 1994 TV movie "Hercules and the Amazon Women"—a role she says she was "a bit young" for—but instead landed the role of an Amazon lieutenant. "I remember being bummed because it was so much smaller [a role] than the Amazon queen," Lawless says. "But it felt quite right to cast us that way. Roma Downey actually played the Amazon queen. She was good; it needed someone with a little bit more life experience than me to carry off that role."

Lawless' bit part in the telefilm led to bigger and better things when the project became the pilot for "Hercules: The Legendary Journeys," a series that saw Lawless ultimately play three roles: Lysia, a man-hating Amazon in the pilot; Lyla, who attempted to kill Hercules; and a villainous warrior woman named Xena in the episode "The Warrior Princess."

"Being the star of an action show is really, really hard," Lawless says. "You've got to keep up a lot of energy, and you've got to be the morale leader. There's a lot on your shoulders. The fighting on 'Xena' was really hard for me." Lawless adds she is grateful for the following the role gave her. "But people in the business, their perception of the role was not always kind. Sometimes you have to go away for a while."

Lawless guest-starred on such series as "The X-Files" and "Burn Notice" and had small roles in such films as "Spider-Man" and its sequel. Between projects, the actor made the most of her time. "I filled it up by having children and actually raising them myself," she says. "I worked a little bit. But as Oprah said, 'You can have everything; you just can't have it all at once.' So that was time well spent. I have well-adjusted children. I wouldn't want to be an Oscar-wining parent with a screwed-up child." In 2009, she landed a 16-episode run as cylon D'Anna Biers in another cult genre series, "Battlestar Galactica."

Then Lawless somewhat returned to her roots, playing Mother Superior opposite her "Xena" onscreen love interest, Renée O'Connor, and filming two episodes of Showtime's "The L Word" before going to work with her husband, producer Rob Tapert, on Starz's "Spartacus: Blood and Sand." "We have a really great working relationship," she says of Tapert. Indeed, on "Spartacus," Lawless portrays loyal wife Lucretia. "When I'm playing Lucretia, the husband-wife experience I draw on is clearly my own marriage," the actor says.

She has embraced stepping away from playing the heroine. "I love to play a victim, and I love to play the wallflower," she says, adding that she hopes to also play "people who are really on the edge of right and wrong—wicked in sheep's clothing, or someone who looks like a librarian but turns out to be a psychopath."

When the actor who played Spartacus, Andy Whitfield, was diagnosed with cancer after the first season, Starz opted to continue the series with a spinoff: the six-episode prequel miniseries "Spartacus: Gods of the Arena." Lawless had mixed reactions to news of the "Spartacus" prequel. "We were a bit horrified that we would have to do something like that," she says, referring to Whitfield's diagnosis. "But it seemed like a good idea because it would keep the audience engaged in all the characters in their world. It was a complete surprise how damn good it was." Lawless will resume her role in Season 2, which has yet to set an airdate.

Looking back, Lawless still has a fondness for "Xena" and remembers that time in her career as "the most outright fun I had ever had." She has no regrets, with the possible exception of passing on auditioning for Peter Jackson's "The Lord of the Rings." Recalls Lawless, "They wanted me to come down and talk to them about 'Lord of the Rings,' but I was pregnant at the time. I didn't feel I could do it; I was too wiped out. I didn't realize that these movies would take three years to film, so I probably could have done it. I wish I had gone along to that, but in that moment, I wasn't in any shape to explore it."

That openness to possibilities—including going on any and every audition possible—is part of what Lawless recommends for young actors. Well, that and being kind to the crew. "They're not being paid as much as you," she says. "They're probably on set longer than you. You are not the thing that makes the show go, even though you're getting all the attention for it. You're just the public face of other people's work."