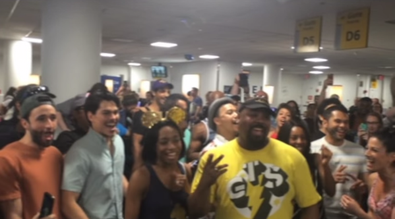 Passengers with delayed flights at LaGuardia Airport in New York City got an unexpected show earlier this week. Also waiting out the heavy rainfall were the Broadway casts of “Aladdin” and “The Lion King,” including Tony winner James Monroe Iglehart and Backstage cover star Adam Jacobs.

To pass the time, the actors performed impromptu renditions of “The Circle of Life” and “Arabian Nights,” and Iglehart dropped an impressive freestyle to the tune of Black Star’s “Lions of Hip-Hop.”

Check out the performances!

Briana Rodriguez
Briana is the Editor-in-Chief at Backstage. She oversees editorial operations and covers all things film and television. She's interested in stories about the creative process as experienced by women, people of color, and other marginalized communities. You can find her on Twitter @brirodriguez and on Instagram @thebrianarodriguez
END_OF_DOCUMENT_TOKEN_TO_BE_REPLACED