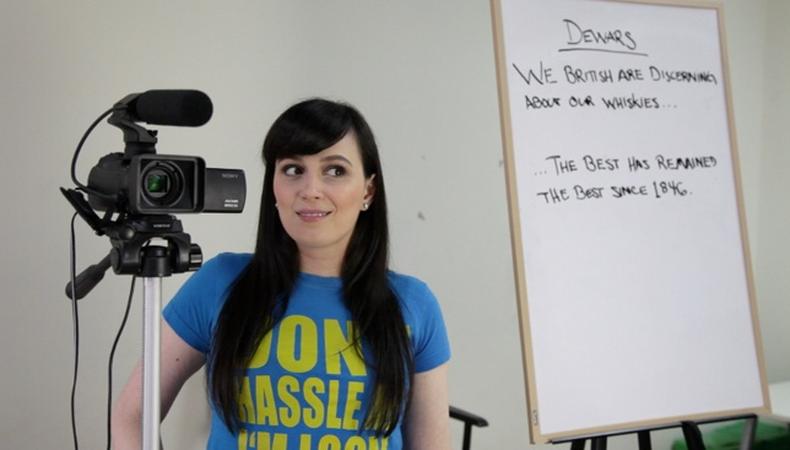 Michael Paul Smith and Gillian Pensavalle must really like each other. On top of creating and starring on “The Residuals,” they also happen to be married. They met while working on “net_work,” a Web series for the now-defunct comedy site Black20 Studios. What started out as a flirtation—they joked that if “net_work” made it, they would take each other to the top—became a real relationship.

“When we became a couple we thought we had to start creating our own material,” Smith says. They bought a camera and Pensavalle taught herself how to edit. “I speak computer pretty well. I just thought, We’ll figure it out as we go. I’ll just learn how to do it. How hard can it be? It’s difficult,” Pensavalle says with the wise laugh of someone who learned her lesson. “There’s a reason there are 45 million people on a film or TV set—because everyone has one job. But we do all of them.”

The result is “The Residuals.” They call it a workplace comedy, and it’s specifically for those who make a living acting in commercials. The show focuses not just on acting, but also on auditioning.

“It’s not just about being in front of the camera and not knowing what to say. It’s about the people you’re surrounded by in these waiting rooms. It’s really awkward. Like, I shut down. To quote a reality show, I’m not here to make friends. I’m going to work. Some people want to chat and talk about how well their careers are going. And in the middle of all of this, your name gets called,” says Pensavalle.

“I tend to be more nervous in my head about things than Gillian,” says Smith. “I benefit from seeing someone I know, but it’s annoying to see the person who wants to be the mayor of auditions.”

“I wonder if it’s a mind game thing,” Pensavalle says. “ ‘Look how popular I already am.’ ”

But for a show about auditions, Smith and Pensavalle didn’t actually have any; they see the irony. Instead they reached out to friends of friends, including “Saturday Night Live” vet Horatio Sanz. “As much as I’d love to be on the other side of the table,” Smith says, “even if we had auditions, I think I’d want to just talk and get a sense of these people. Do you want to spend eight hours in a row with this person?”

Smith encourages actors to reach out to Web series creators they think are making interesting things. Mark Gessner, who plays a casting director on the show, saw a sketch by Smith and Pensavalle and reached out.

Season 2 of “The Residuals” streams exclusively on BroadwayWorld.com. The first season was based largely on the couple’s own experiences, but Smith says the second go-round is a bit more surreal. “But,” Pensavalle says, “there’s a nugget of truth to every story.”