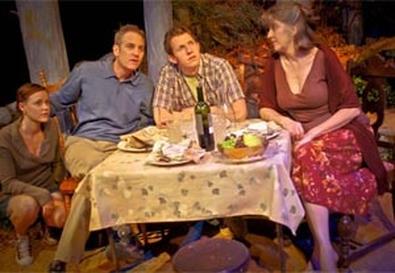 Photo Source: Chris Goss
Buried grief is unearthed in Theresa Rebeck's "The Water's Edge," her 2001 family drama about an absentee father whose sudden appearance seems to have a glimmer of healing potential. A nuanced ensemble brings an authentic mix of light and dark to the painful proceedings of a fractured family reunion. Based on the first part of Aeschylus' "The Oresteia"—in which Agamemnon returns home from the Trojan War to meet a bloody fate at the hands of his wife, Clytemnestra—the play never reaches the full dramatic heights of Greek tragedy, but it's a satisfying modern-day rendering.

Richard (Albie Selznick) brings his young girlfriend Lucy (Lauren Birriel) to the lake-front home of his former life. Richard's ex-wife, Helen (Nicole Farmer), isn't even a little happy to see him, nor is his daughter, Erica (Paris Perrault). Nate (Patrick Rieger), Richard and Helen's half-witted son, is the only one offering any sign of slight happiness over Dad's return. It turns out that a big family tragedy, an event that Richard has hidden from Lucy, was at the heart of Helen and Richard's split, and Helen can't get over it. As Richard tries to explain himself to his family, he also reveals that he wants to take back his house and be a presence for his children. Helen is incensed. But civility wins the day, and the estranged couple attempts a family dinner for the sake of the kids. Things go from awkward to lovely to hideous in one evening.

The bad blood between Helen and Richard fuels the action of the play, but the impact of their broken marriage is most sharply evidenced in the characters of Nate and Erica, and the actors playing the children in this production end up stealing the show. Rieger commits himself so fully to Nate's childlike anxiety that it's hard to take your eyes off him. Perrault is no less commanding a presence as the no-nonsense daughter, whose vitriolic mask hides a bottomless need. Desma Murphy's set and Kathi O'Donohue's lighting are winning.