1 Way to Make Your Comedy Career Take Off 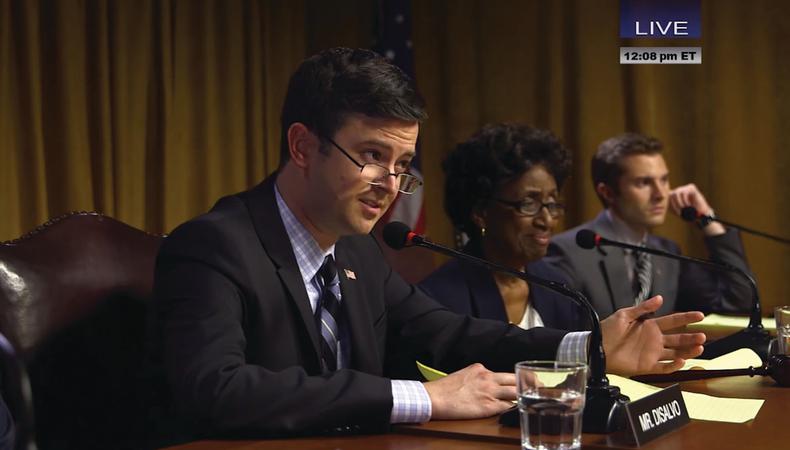 If you could challenge someone in a court of law for the annoying little things they do in everyday life, who would you sue? The guy who snaps his gum while chewing with his mouth open? The girl who wraps her entire body around a subway pole during rush hour? What about the person who boasts about actually enjoying green juice?

Now, the improv and sketch comedy team Simply Unemployable, composed of Richie Moriarty and Matt Catanzano, has teamed up with online media platform Above Average to make all of your prosecutorial fantasies come true.

With several episodes online already and the season finale scheduled for Jan. 29, “Congressional Hearings” has tackled a slew of hilarious societal crimes.

During the summer of 2014, when General Motors was going through a series of hearings following its recall of cars due to faulty ignition switches, Moriarty explains that he and Catanzano started talking about how ineffective Congress was at getting real legislation passed. “We thought, How could we tweak that so they are addressing society’s minor issues?” he says.

Topics the show has covered thus far include people who claim they’re gluten-intolerant; “vaguebooking,” or posting vague Facebook statuses; people who like “The Big Bang Theory”; people who post spoilers online; and people who are constantly on social media or talking about their new workout.

“It’s one of those things, like, when an idea comes up like that, let’s try and think of 50 ideas, and if we can’t think of a ton off the bat then it’s probably not a great series idea,” says Moriarty, who plays Rep. DiSalvo.

“Even now I’m keeping a little notebook ’cause I keep thinking of new ones,” adds Catanzano, who stars as Rep. Biltman on the series.

But “Congressional Hearings” is just one of many projects Simply Unemployable has put out. The two met doing corporate and travel shows with Boston’s Improv Asylum, after each spending time as main-stage performers.

As a comedy team, they have produced another Web series (“ETC: Employment Through Craigslist”) and several one-off videos including “First Raspberry”—a parody of the viral 2014 “First Kiss” video in which complete strangers were asked to kiss each other—and many more.

The videos aren’t just for fun, though. Simply Unemployable’s YouTube channel is full of work that gets them noticed and helps them book gigs. “Our channel is sort of our bread and butter,” says Moriarty. “We’ve spent a lot of time and energy on [these videos] and that’s sort of the driving force of our hard work. [That’s] what’s helped us get managers and agents and all of that stuff.”

It’s also a major reason the duo was able to become channel partners with Above Average. After meeting with the company, “They were like, ‘This is really great—let us know when you have more stuff,’ ” explains Catanzano. “And we were like, ‘Oh. No, no. We raised money and shot an entire series; you can watch all seven episodes.’

“So, however you can do it, with friends or whoever, make stuff,” he advises, “because all of the opportunities we’ve gotten have been because we had stuff already done.”

“It’s been so amazing to see how impressed people are that we’ve just taken initiative and created stuff on our own,” adds Moriarty. “And the only way you’re gonna get better is by doing it.”