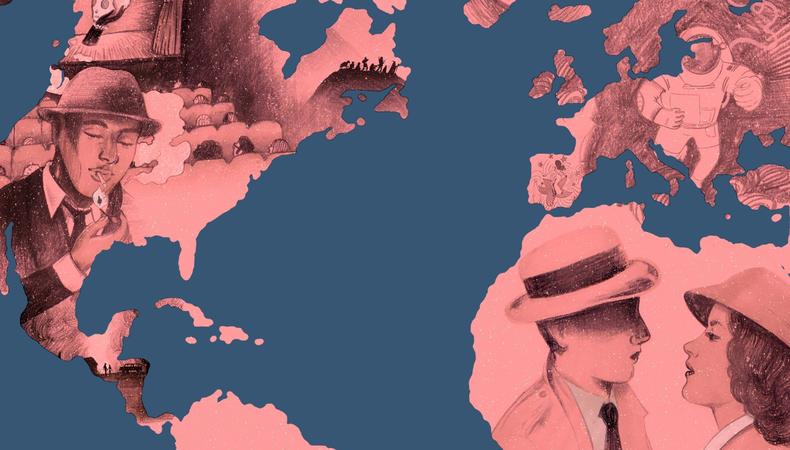 Luci Lenox is an Irish-born, English-educated casting director with credits spanning from Sacha Baron Cohen’s “The Dictator” to National Geographic’s Emmy-nominated “Genius.” After holding a few different jobs in film production, she chose to stick with casting, something she fell into when she helped audition actors for a project in which the casting director didn’t speak English. Since then, she’s lived and worked mainly in Barcelona, working on both domestic and international film and television projects. She has also traveled back to England to do some work there. Working in a smaller international region, she knows firsthand the differences—and similarities—among working actors around the world.

What are some similarities you’ve found between auditioning and acting in the U.K., U.S., and Spain?
When someone’s good, it doesn’t matter where they’re from. The people who go on to have great careers, they’ve just got that very strong instinct and ability to listen and to be in an imaginary world immediately, even in an audition. I think what’s surprising is how similar actors are all over the world. They all have the same concerns. They all want to be seen, they want to do their job.

What are the differences?
They are very subtle. In a country where there are a lot of castings, people can be more relaxed about them because they’re doing them more often. In a place where there are not very many castings, it could be that someone hasn’t been to a casting for three or four weeks, or three or four months, so they’re much more nervous. The stakes are higher. The differences can also be cultural, but it’s the same as meeting anyone from a different culture. You know, English people might be more formal; they might not expect you to engage in so much small talk. Spanish people might think that you’re going to give them a kiss. Russian actors might be more serious. American actors might be more used to doing castings [and] just come in, do their job, and forget about it.

Do you always audition in English, or do you do Spanish as well?
I do English and Spanish, and then we did German this year, because we did a German series. So I do English, Spanish, German, and Catalan, as well.

What is the biggest audition mistake an actor can make?
When people stop listening. Their nerves get in the way, so they’re not listening to what’s asked of them, and they’re not listening to whoever’s acting with them. They become stiff, and then they become flat. Being flat in an audition is the biggest mistake. I work with a lot of people who are acting in a language that is not their first language, so when we’re doing English auditions for Spanish actors, sometimes they’re worried about the text and how to say it instead of feeling the emotions.

What do you wish actors knew before coming in and auditioning for you?
The more their attitude is positive and they’re there to have fun, the better; it’s a chance to show their skill. It’s a bit like when you ask a musician to play violin even though it’s not necessarily in a concert hall: They enjoy doing it. I’d like actors to enjoy the process of casting a little bit more, as it’s an opportunity to show what they’re good at. The other thing I would like them to do is to leave everything outside. Just be the role when you’re in the room. I don’t need to know how you didn’t sleep last night or how you prepared for it. And I don’t need to know that your dog was sick. I just want them to be believable and leave all the other stresses outside.

What are casting challenges you run into often?
Managing people’s expectations. A lot of people come to Spain to do a project, and they think, “Oh, Penelope [Cruz] will do my film.” And you’re like, “Hmmm, I don’t think she will.” Also trying to help actors show what they can do in an audition, because an audition is a different skill. Some actors are really good at auditions and some actors who are brilliant are really bad at auditions because of their nerves, or because they don’t have fun in them. They don’t treat them as a kind of puzzle or challenge. The most frustrating thing for me with an actor is that you know that they’d be brilliant in the world, but you can’t get them to show that in the audition.

Is a bad audition always the end of the process for actors you’ve worked with?
No. It’s really interesting. I study things like nerves a lot. And some people, when they get nervous, they get kind of aggressive, or passive aggressive, and that can make them come across as unpleasant. That’s a really bad idea, because that can put people off. But some people are just generally nervous, because you can tell that it means so much to them. Then you know that they care so much.

People have to remember that actors aren’t meant to be perfect. Also, never underestimate. I know so many actors who could have gotten the role, but it goes down to the wire because they’re more enthusiastic than another actor. And I’m not talking about A-listers here, because that’s a totally different world. Once you’re up there and everybody knows you, you’ve got a totally different attitude. But when you’re talking about people going in and they’re not known and they meet the director, the people who are enthusiastic—and I mean genuinely enthusiastic, not, like, fake enthusiasm—people want to work with them. When somebody comes in and they’re kind of passive aggressive and rude… I’ve gotten more tolerant about that recently, because I did a course on communication and one of the things they said [was that] people get like that because of nerves, so I’m trying to be more tolerant. Before, when I felt people were surly, I was like, “Why are you here?” You know, this is an opportunity. I’ve invited you to this opportunity. Why are you grumpy? But I’ve now tried to work through that and see if I can stop people being grumpy.

What makes someone stick out to you on an audition tape?
It’s just that they’re believable in the role. They don’t even have to do anything too much. I’ve seen some incredibly good self-tapes. And it’s when the person’s alive on tape, so when they’re not speaking, they’re still in character. You just believe them. You don’t have to have too many props or too much costuming. Someone [gave me a] self-tape [of them] being shot, and they added in sound effects. It was surprising, it was fun. Directors get bored listening to and seeing the same thing over and over again, and sometimes somebody will do something so random, but it’s charming, and you go, “Oh, let’s have him.”

As a CD, what is your advice to actors?
I’m always trying to stress to actors that actors are not looking for roles. I mean, of course they are, but really, the role is looking for the actor. The actors are in a much more passive position than they actually think. And the role will just find the actor that’s right for that role. For whatever reason, they might just look right, and then people will work harder on their acting, or it might be because their acting is so great that they’ll adapt the looks. But it’s like the role is a vacancy that’s just looking for one person. Sometimes it can be a very random reason why someone gets a role. Once you’ve covered all your basic bases, like knowing how to act, how to listen, and how to learn scripts, the rest of it is about chemistry and being in the right place at the right time. There are some things that you just have no control [over].

Elyse Roth
Elyse is a senior editor at Backstage, where she oversees all casting news and features content, including her weekly casting director Q&A series, In the Room. She came to New York from Ohio by way of Northwestern University, where she studied journalism, and now lives in Brooklyn. She might see and write about awards-worthy films, but Elyse still thinks “Legally Blonde” is a perfect movie and on any given night is probably taking in some kind of entertainment, whether it’s comedy, theater, ballet, or figuring out what show to binge next.
END_OF_DOCUMENT_TOKEN_TO_BE_REPLACED