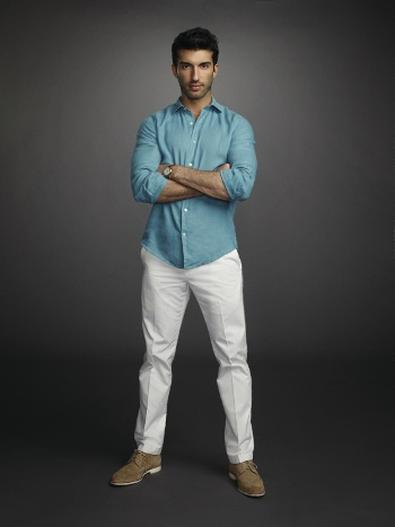 This fall, Justin Baldoni comes to the CW’s new series “Jane The Virgin” as Rafael, a cancer survivor and Jane’s accidental babydaddy.

On landing “Jane The Virgin.”
“I had taken a break from acting, to be honest; a little over two years I’d been away to start my production company [Wayfarer Entertainment]. We produce content that we hope makes the world a better place. My career was going the director way, but I said to my wife and my manager, ‘If something’s really good that supports our mission, yes, I’d love to.’ ‘Jane The Virgin’ was the second thing that I auditioned for.”

On the show’s storytelling style.
“It creates this fairy-tale world—we’re all daydreamers, we have visions. What ‘Jane’ does is take the telenovela universe and make it real. What I love is it takes the drama and it makes fun of itself a little bit. It brings comedy into the crazy things that happen in life.”

On how directing informs his craft.
“When I can see things through the lens of the director, it’s like being able to see the whole puzzle—it’s not just about my role, but the whole script. I’ve been able to take on a collaborative role with directors and I’m able to understand their language; it allows me to be of service to my other cast mates in terms of what they might need.”

On how his documentary on cancer survivors helped him play Rafael.
“I spent so much time understanding human connections and the struggle to live and survive and find our true selves [with my documentary ‘My Last Days’]. The thing that taught me the most about playing Rafael is remembering how easy it is to forget. One of the Arabic words for human is ‘forget’—forget the good and the bad and not be in a constant state of pain, and also to re-experience. [Rafael is] a normal guy, blessed with a lot of money and born with the proverbial silver spoon, but that’s not who he wants to be. I know if I react and I want to get mad and emotions come to the surface, I think quickly of my friends who have died and how they overcame their struggle and used their cancer and their lives for the betterment of mankind, and it sets me back in place. So [Rafael] might forget, but he’ll also quickly remember.”

On staying focused as an actor with faith.
“My little secret before I do every scene is I say a short little prayer. I’m Bahá’í and the Bahá’í faith says the reason we’re in existence is to be of service. The prayer is ‘Oh God, make me a hollow reed, from which the pith of self has been blown so I may become a clear channel through which thy love flows unto others.’ I just want to be able to be a channel for whatever’s to come through, so I try to take myself out of it as much as I can. As actors, we’re insecure and faking it all the time—it’s a reminder that it’s not about me in the show, but to be of service in some way.”

Briana Rodriguez
Briana is the Editor-in-Chief at Backstage. She oversees editorial operations and covers all things film and television. She's interested in stories about the creative process as experienced by women, people of color, and other marginalized communities. You can find her on Twitter @brirodriguez and on Instagram @thebrianarodriguez
END_OF_DOCUMENT_TOKEN_TO_BE_REPLACED