6 Ways Fight Training Will Make You a Better Actor 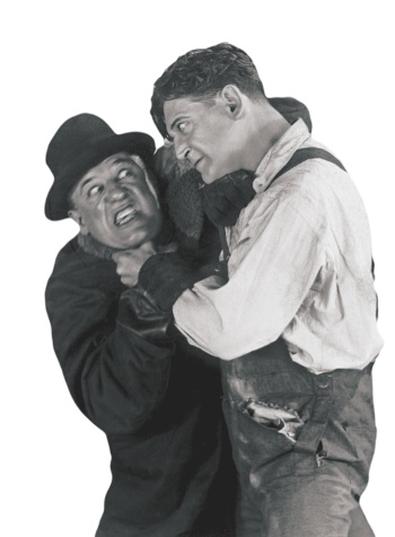 There is a common saying in stage combat circles when comparing the wrong way to do something with the right way: “Hospital. No hospital.” Your body is your instrument, and stage combat training teaches you how to keep it in one piece. You will also learn when and how to advocate for yourself if you feel that you’re being asked to take an unnecessary risk. An actor who is assured of his or her own safety in a physical scene is one who is free to create as an artist—and far less likely to have an understudy take over because of an injury. Remember: No pain…no pain.

This point might seem obvious, but it covers more scenes than you might realize. “Fight scenes” don’t just mean the climactic battles (as awesome as those are). Pivotal slap in the face during an intense drama? You’ll own that moment. Dying of a heart attack? Audience in the palm of your hand. Comic slip on a banana peel? They’ll be laughing all the way down. And if there’s a climactic duel, you’ll be better able to handle more elaborate choreography, making the most of your rehearsal time and having a far better fight than without training.

Stage combat is a genre of physical theater designed to articulate a clear narrative of character conflict. Practicing physical storytelling where conflict and objective are clear and up-front will only help your physical expression in any other scene. We’re in the business of telling stories. Practicing the narrative clarity of a good fight scene will carry over into your other work. When every move in a scene is a potential matter of life or death for your character, that intensity and attention to detail will infuse all of your acting technique. Which brings us to…

A duel with broadswords will have you portraying life-or-death situations. The stakes are not often higher than that. Training in how to get to that extreme safely and effectively will help increase your emotional range as a performer in any medium in which you find yourself performing.

Acting can be hard work. The fitter you are, the better able you will be to face the demands of a role or an audition.

Deepen Your Ability to Analyze a Scene

Understanding why and how characters engage in physical violence gives us opportunities to apply dramaturgical thought in a pragmatic setting (I call this fightaturgy). What would cause your character to cross the line and assault someone? How would your character react to that kind of violation? How will that incident inform other interactions? In what cultural context does the play take place, and does that dictate how the violence will take place at all?

Stage combat is an element of theater and film wherein so many other elements combine, and yet it’s often relegated to “supplemental” training. Many performers find that getting trained in this facet of acting will yield dividends in every aspect of their lives as theater artists.

Meron Langsner is an award-winning playwright, fight director, and performance scholar based in NYC. Visit www.MeronLangsner.com.