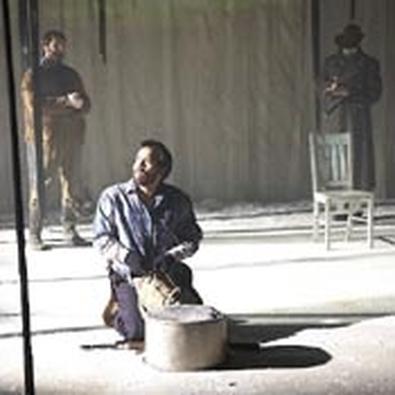 The problem with theatre meant to frighten you is that the effects, which are supposed to make you jump out of your seat, are never as seamless as they are in film. The best scary moments on stage must take the audience completely by surprise and leave no trace of how they were accomplished; the final moment of Shining City, on Broadway a few seasons ago, comes immediately to mind as wholly successful. And the problem with The Wendigo is that despite a few genuinely creepy moments, the strings being pulled are too obvious.

A bare-bones set, bathed in fog — far too much for such a small theatre — is transformed into a Canadian wilderness in which something wicked this way comes. Hunters Doc (Erik Gratton), Simpson (Nick Merritt), Hank (Graham Outerbridge), and Indian guide Defago (Kurt Uy) are in search of moose but instead come face to face with the Wendigo, a slightly incomprehensible creature that runs so quickly its feet burn off before growing back.

While the sound design is appropriately nerve-shredding, the rear projections are hit or miss. The creepiest image is a negative of a woods, in which the trees are all white but the sky is black; a glimpse of the Wendigo's eyes, however, resembles a feral cat more than a fearsome It. But the major issue with The Wendigo is in Eric Sanders' adaptation of Algernon Blackwood's short story, featuring plenty of setup but only a few moments of payoff. And director Matthew Hancock does very little to make four men standing around talking — even if they often speak in menacing voices — really come alive.

As the narrator, Merritt is saddled with a lot of overwritten exposition that drains the tension by calling attention to the script, leaving us enlightened but not quivering in terror. Likewise, the arguments that break out between Simpson, Doc, and Hank when Defago disappears never quite ring true, especially as Gratton delivers his dialogue with a British accent that seems out of place among the rest of the group. But when Defago reappears, practically frothing at the mouth, there are moments of very real terror courtesy of actor Uy and a design team who adhere to the less-is-more theory. If everyone involved followed that philosophy and punched up the scares that are currently buried beneath the endless talk, The Wendigo could be one hell of a creepfest.