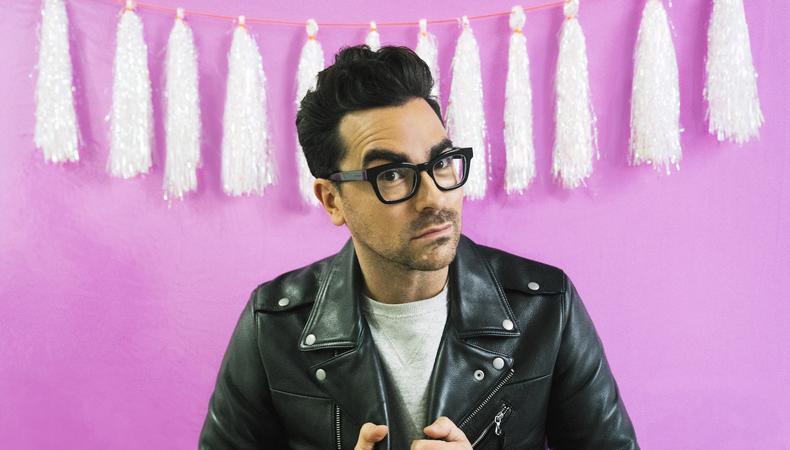 Alongside co-stars Catherine O’Hara, Eugene Levy (his father and co-creator), and Annie Murphy, Dan Levy says he likes to run his “Schitt’s Creek” set by having everyone check their ego at the door. “That freedom, that level playing field, is where you get the best work out of your actors.” Now airing its fifth season on Pop TV, the acclaimed single-cam sitcom has made Levy one of television’s most exciting new voices. He came by Backstage HQ to tease his secrets to the trade of creating your own work.

…and read between the lines.
“I sat in the audition room for every single one of our auditions for every cast member, and it was the people who showed up who didn’t have anything to prove that were the most compelling to watch…. The reality is, in an audition setting, people see hundreds of people at a time, so if you’re not doing something that’s different you’re going to get lost in the mix. Taking a risk, that’s a fearful thing for actors because they think, Well, if this is off base, then I really don’t have a shot. But that risk will get you seen. That risk will be what people talk about, whether it’s right for the show or not. You’re going to stand out if you bring yourself into the role as best you can and really personalize each character you go out to audition for and not be fearful about [being] too left of center.”

Embrace the survival job hustle; don’t be desperate.
“So many of us go into every audition thinking this has to be it. And a lot of times, too, we’re waiting tables, we’re taking jobs we don’t want to take to subsidize a career choice that is not a given. And so there is a level of urgency. We need a job! But also, the vicious cycle of that is that you’re walking in with an energy that’s like, ‘I need the job!,’ and people can feel it.”

The ability to follow through will serve you well.
“If you don’t follow through, you will physically have nothing. If you don’t follow through with the script idea that you have, even if you hate what you’ve written, at least at the end of it you have a script. So many people don’t have follow-through. If you could get something done, if you could write something or continue to audition and never give up, it’s the follow-through that will ultimately put you ahead. It will put you out in front. To be able to have something, whether it’s audition experience, or a pilot, a movie script—to be able to have something is invaluable.”

Focus on booking the room, not the job.
“You want to leave an impression, I think. That’s half the battle. In a way, there’s so many steps that go into booking the job. It could be as easy as showing up and the script is exactly in line with who you are and it’s easy. We’ve all had those one-in-a-million auditions where the sides are just, ‘I could do this very easily,’ and you walk in and you give a great audition and it’s natural. But most of them, you’re reading it being like, ‘I don’t know if I can do this!” But part of the experience is not booking the job, it’s walking in and developing a relationship with the casting director and producers.”

But you don’t have to create your own work to succeed. You are enough!
“Friends of mine have felt a lot of pressure to write or do things above and beyond just being an actor because we’re in an industry where people are quadruple threats. The reality is, some people don’t want to write. And that’s OK. So as much as I can say, ‘Go write something for yourself,’ there are people out there who are saying, ‘Well, I’m not a writer. What do I do?’ In which case just keep trying. But it bothers me so much right now. Where actors are meant to feel like being an actor isn’t enough. It is enough. You’re doing good. You’re entertaining people at a time in particular that’s very tremulous. Entertainment is not changing the world, but it is in many cases changing conversations. In the case of my show, I’m hearing feedback from queer kids writing in saying my show has helped their parents understand them better. That’s what entertainment can do. That’s what acting can do. So, actors: Your profession is incredible. And never feel the desire or the need to be anything more than that if you don’t want to.”