When to Say Yes—and No—to an Acting Job, According to an Agent 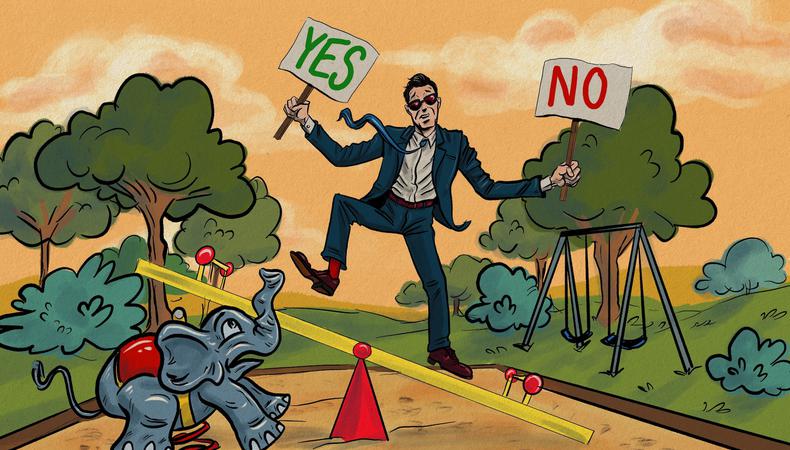 The best part of my job is telling clients they got the job. Nothing makes me happier. (And, no, I’m not just thinking about the commission.) Most actors, however, accept offers without considering why (or if) they should. I would argue you need to be savvier than that. So, let’s consider the three main reasons you should light up with acceptance when I call with an offer. If these boxes aren’t checked, maybe you should consider turning it down.

READ: Why Saying ‘No’ to an Offer Could Get Your Acting Career Back on Track

1. Career advancement. Once your headshot is set aside, industry types will judge you based on your résumé. That’s why it’s crucial to build up some credits. So, accepting jobs to create a body of experience is a perfectly reasonable thing to do. I also believe nothing is gained by sitting at home. Being on set is an opportunity to make new contacts. I remember when one of my clients accepted a part on a web series because he liked the director. A year later, that director got her first film deal and she hired him again.

2. Financial gain. Sometimes, it’s all about those dead presidents on the green. Actors accept boring parts on network procedurals because they have to pay their bills. Not every job can be about advancing your career. It makes perfect sense to build up your savings so you can get to the point where every decision doesn’t have to be based on money. There are also moments when you just need to get paid. For example, let’s say you’re $500 away from earning enough in a calendar year to qualify for SAG-AFTRA health insurance. I get calls from clients in this position all the time. And in those situations, it’s all about finding a job, any job, that will pay enough to solve the problem.

3. Artistic challenge. This is a rare thing in this jaded business, but there are times when the acceptance of an acting job has nothing to do with your career or money. There are moments when you need to be challenged as a performer. Those are the moments that keep your soul intact.

Bob is an actor who plays characters in suits. I’m talking about lawyers, doctors, and politicians. Bob’s good at this because he projects authority and intelligence. It’s why casting directors love to bring him in—and why he can afford to live in a nice house. But consider this: What should Bob do if he gets offered a part in an independent film that pays a little more than nothing and will probably never see the light of day? You might say that’s an obvious pass, but hang on. Let me tell you about the part. Bob would be playing a scuzzy alcoholic who lives at the end of a bar and never stops talking about his glory days. Now, what do you think? Sounds like an artistic yes to me. There’s no career advancement or financial gain, but Bob will have a blast playing this character, and it will be the kind of artistic challenge that keeps him happy for a long time.

READ: 11 Veteran Actors on How to Say No in This Business

There are other reasons to accept a job, but those are the big three. There are also several reasons you should pass on an offer. I know what you’re thinking: Pass on money? Has SAM lost his mind? But hear me out, because there have been plenty of times when I’ve advised clients to do just that—and they’ve always agreed with me.

The first thing you need to understand is that you have the right to say no. Being a struggling actor doesn’t mean you have to accept everything you’re offered. There will be plenty of times in your career when walking away from a sure thing is the smartest way to go.

Let’s say you’re an established actor with an extensive résumé that took years to build up. Now a production company wants you to work for scale, and they don’t care that your quotes are much higher. Should you accept the offer? I say, screw them. Your talent is worth a certain dollar amount, and those producers need to respect that if they want you in their project.

What if you’re a guest star–level actor who does a ton of episodic work and a casting director who has hired you in the past offers you a co-star role? Most actors would think, She’s hired me before and I don’t want to make her angry, so I’m going to say yes. Well, that’s loser talk. If this casting director likes you so much, she should respect your body of work and not insult your talent by offering you a crappy part. In the disposable world of episodic television, a bigger and better role is always right around the corner.

READ: Backstage Experts Answer: When Is It OK to Turn Down a Role?

In these situations, casting directors crack me up because they always phrase insulting offers the same way: “Will your client do me a favor and play this part?” I don’t even know what that means. A favor is reciprocal. And when I ask what my client will get in return, they never have an answer.

Now, let’s tackle this from the perspective of a less-established performer. I recently had a young woman fresh out of college audition for an independent film. The good news is she got the part. The bad news is they failed to disclose the role involved nudity. My client was nervous about appearing naked onscreen, but she was also scared to pass on her first real offer. “How can I say no? I need the scenes for my reel! What if the movie goes to Sundance?,” she asked. I explained that was all white noise. The real issue was simple: Was she willing to get naked on a set knowing those scenes would live forever in this digital world? My client said no. End of story.

From now on, I want you to think of yourself as a superhero. Your powers are the ability to say yes or no. How will you choose?