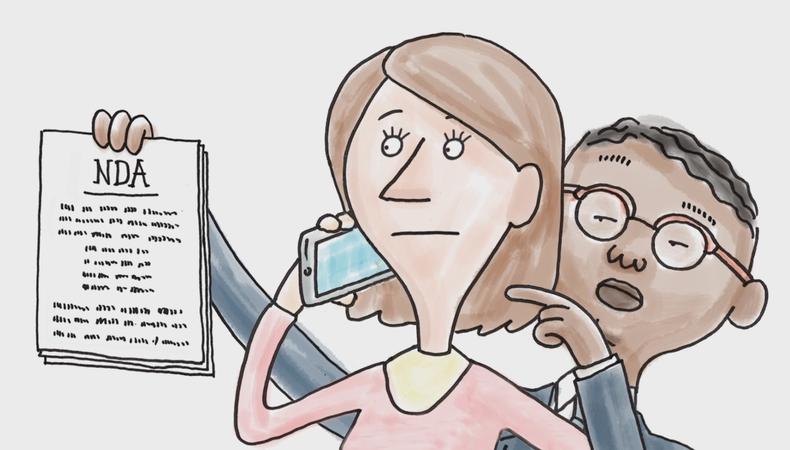 “The Good Fight” fans may not know Jonathan Coulton’s name, but they know his work. The Emmy-nominated composer is the musical brains behind the minute-long animated songs that you’ll be seeing more of in Season 3 of the CBS All Access hit. Ahead of the premiere, Coulton chats about the unconventional path he took to working on the hit series, the differences—and similarities—in writing for television and theater (he wrote for Broadway’s “SpongeBob” musical), and the ways in which actors can mine music for deeper storytelling.

Your role on “The Good Fight” is quite unique. Can you describe it?
At some point in every episode, the show breaks for a little animated musical short about a topic that is related to the plot of the show. I write a song about that topic, and then Head Gear Animation makes the video. The idea is that they are kinda like “Schoolhouse Rock!” videos about current events and legal content and people in the news.

READ: How to Help Composers Speak + Sing for Your Character

How in the world did you come aboard the series in this capacity?
I did a cover of Sir Mix-a-Lot’s “Baby Got Back” in a folk style, and the arrangement that I made was used by the show “Glee” without asking me permission, and we had a little fight in public. Some time later, a friend texted me to say, “I’m watching an episode of ‘The Good Wife’ right now that seems to be based on your experience with ‘Glee.’ And in fact, [series creators Michelle and Robert King] had written an episode around that story. I mentioned it on Twitter, because it was very flattering and funny, and then the Kings invited me to do a little bit part on one of their episodes. From there, they asked me to write music for their series “BrainDead,” where I did musical recaps at the top of each episode. Then last season on “The Good Fight,” we did one of these animations about impeachment, but they wanted to step it up this season, so we’re doing one for each episode.

That may be the strangest way anyone’s ever gotten a job.
Yes, anybody who tells you that you can plan out your professional career exactly doesn’t know what they’re talking about.

In addition to television, you’ve also worked in theater. Does your process change between mediums?
Yes and no. I think one thing that suits me well in both writing for these shorts for “The Good Fight” and also writing for the “SpongeBob SquarePants” musical is that I do very much think about storytelling and character and the voice of that character. I’ve always written songs that have a theatrical bent to them; they tell a story about a character. But certainly it changes when you are writing for a stage musical, where you have to think about what the song does. It has to introduce characters, set a mood and a tone, it has to be fun to listen to and catchy. The medium that you’re working in tends to give you parameters for solving a puzzle. There are a number of marks you have to hit, and that’s really helped me in the process of writing a song.

In what ways can music influence or enhance an actor’s performance?
My favorite thing about music in a theatrical perspective—whether in a Broadway show or in a TV show—is that it’s part of some other storytelling device. It lets you work on a couple of different levels. Music gives you another channel to communicate through, so there’s the text, there are the lyrics, the literal words that people are saying, there’s the actor conveying whatever emotion and meaning is there, but then the music is also saying and doing something else. It can be in concert with those other elements, or it can be something completely different, and that’s when it gets really interesting—like when the song is sad and the actor is playing a character who doesn’t know the song is sad, or when the actor is meant to be playing a funny character, but it is not clear to them that they’re funny, and the music is letting you know that it’s OK to laugh. With music, you get to convey more than one idea at a time because you have multiple channels to communicate through.

Do you have any advice for musicians who want to write for entertainment?
So much of what’s happened to me has been luck and accident, but if there’s one thing that will help, it’s that whatever you’re doing or whatever medium you work in, you need to figure out what your voice is and what you are trying to say, and the ways in which you are interested in communicating through your art. When you find the medium that you can work in and the message that you are best tuned to say and the way in which you are built to say it, it’s a very satisfying feeling and it’s so much easier to work and create great things when you are working with tools you understand yourself. Hopefully, if you find that thing and you care about it, it’ll be that much better and people will notice it and say, “Oh, that’s exactly the sentiment I was hoping to find. Yours is exactly the approach I was hoping to discover.”

Want to book work on the stage? Check out Backstage’s theater audition listings!

Casey Mink
Casey Mink is the senior staff writer at Backstage. When she's not writing about television, film, or theater, she is definitely somewhere watching it.
END_OF_DOCUMENT_TOKEN_TO_BE_REPLACED