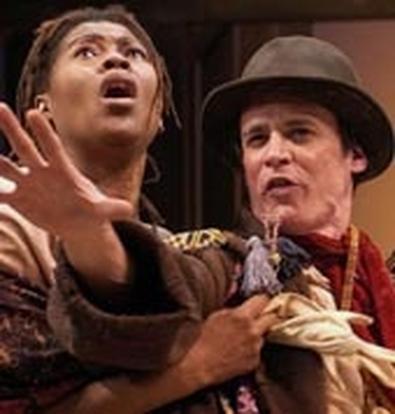 Known for perhaps the silliest stage direction of all time ("Exit, pursued by a bear"), Shakespeare's "The Winter's Tale" suffers from an identity crisis. Is it a Greek-style tragedy exposing the bitter returns of obsessed jealousy? Is it a raucous country comedy, with sheepskin-wearing peasants and wily pickpockets? Is it a bittersweet love story of a reluctant prince and his mystery shepherdess? It is all these things, and probably a few more.

This changeable play poses a challenge to a director: how to string a unifying thread among the variety of genres. How can the disparate worlds of Sicilia and Bohemia, the court and the shepherds, the hot tragedy and the bounding comedy be united?

Apparently director Michael Bogdanov doesn't think they should be unified at all. His "Tale" traverses time in a seemingly indiscriminate fashion, beginning with something Victorian, then immediately to the 1920s, where Claire Lyth's crisp black, silver, and white palate brings to mind the Ascot Gavotte.

One may think that the second half, set in Bohemia, would have a contemporary setting, as it opens with a rousing rap and break dance, but the bling-bling rappers are replaced with corset-wearing shepherdesses within moments. Too bad. Moreover, the Bohemians seem to be from Appalachia (or thereabouts), exempting Autolycus, played with verve by James Fitzgerald, who seems to come from the English West Country, or perhaps Ireland. Regardless, the setting provides for some foot-stomping compositions by Alaric Jans, performed by virtuosic musicians (some astonishingly young).

As ever, the casting at Chicago Shakespeare is sublime, beginning with Chicago Shakes newcomer Johanna McKenzie Miller, who leads the ensemble in an a cappella "In the Bleak Midwinter" with a crystal soprano voice, as the lovely Perdita. John Reeger tackles the challenging role of the alternately paranoid and repentant Leontes handily, and Barbara Robertson plays the resilient Hermione with grace.

Bogdanov's era-hopping settings can't take away from the superb performances and stirring music. I suppose that if ever there were an opportunity to set a play in a hodgepodge of decades and locations, this would be it. But at the end, one leaves wondering about the reason behind the director's choices.