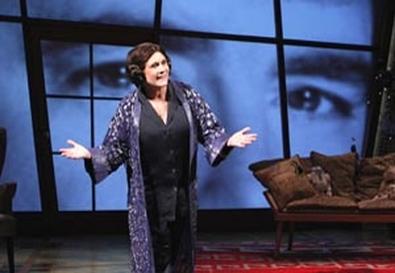 Photo Source: Joan Marcus
"If my life wasn't funny, it would have to be true," declares Carrie Fisher in her solo piece "Wishful Drinking," an irreverent memoir that is both funny and true. The show is a combination standup act and slumber party. Alexander V. Nichols' set resembles a bedroom with a giant projection screen and weird props, such as an R2-D2 doll and something that appears to be a giant apple. Fisher is attired in a comfy bathrobe and pajamas, ready to curl up on the sofa and dish some dirt. The tone is set from the start as she warbles "Happy Days Are Here Again" while unflattering tabloid headlines about her flash across the screen. Fasten your seat belts, she seems to be saying, you're in for a bumpy night.

The daughter of showbiz icons Debbie Reynolds and Eddie Fisher, the author-performer treats the audience to delicious Hollywood gossip, insights into dealing with addiction, and examples of how not to pursue a happy marriage (she's had two, a short-lived union with Paul Simon and a second one with an agent who turned out to be gay). Her parents' infamous breakup and their subsequent marriages provide the show's highlight, as Fisher explains the complications that arose when her daughter started dating the grandson of Elizabeth Taylor, the woman for whom her father left her mother. She traces the labyrinthine affairs of three generations in a hilarious mock lecture called "Hollywood Inbreeding 101." Though the many couplings and uncouplings may have caused her pain as a child, she's able to laugh at them now, and so are we.

She also takes us behind the scenes of the "Star Wars" films—George Lucas' only direction to Fisher, playing Princess Leia, was "Faster, more intense"—but this is more than a juicy tell-all. Fisher dryly delivers her observations on aging ("I haven't been naked in 15 years, and I haven't been sleeveless in 20"), finding love ("I knew as I got older my chances for romance would get slimmer, but the people haven't"), and the strange coincidence that her image has been used as both a Pez dispenser and in a textbook on abnormal psychology. She frankly discusses her bouts with manic depression and substance abuse, observing that time has permitted her to see these trials with a comic eye.

The only segments that fall flat involve audience participation. Unfortunately, Fisher is no Dame Edna. You can practically feel the discomfort in the air as an unlucky theatergoer reluctantly climbs on stage to try on a Princess Leia wig, with its bagel-size hair coils.

But apart from these awkward interludes, Tony Taccone's staging never flags, and Fisher never fails to get us chuckling at the insanity of her life and admiring her resolve to survive.