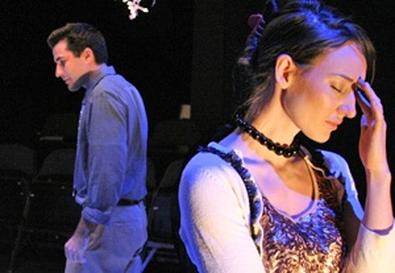 Photo Source: David Potes
Kids With Guns, appropriately, appears to be a young company made up of young people, and there are tantalizing flashes of nascent talent on display in "Wolves," Delaney Britt Brewer's loosely connected triptych. But kids, if you've got guns, at some point you're going to have to use them.

Brewer's rather scattered examination of anomie among the late-20s-to-early-30s set assiduously avoids the melodrama of smoking firearms. Part One, called "A Wolf in Sheep's Clothing," details the events of a fateful New Year's Eve for Caleb and Kay, who've been a couple for three years but only started living together a month prior. He still pretends to be writing the novel he stopped working on when he met her. She has started to think that he won't deliver the grown-up existence she's always planned. They both dislike the shallow, pretentious friends they are partying with in upstate New York, which doesn't stop them from confiding secrets to them.

In Part Two, labeled "Crying Wolf," siblings Julie and Elliot are waiting outdoors in the country for midnight to come, when they will scatter their mother's ashes in the nearby lake. Elliot drinks too much, while Julie still pines for Sasha, the lover who left her to marry Caleb, while also blaming herself for her mother's death for reasons that are never adequately explained. The evening's conclusion is a quick and studiously mannered snapshot of Caleb and Sasha's marriage and the effect it is having on their 13-year-old daughter, Wolf.

Brewer's recurring wolf imagery—Caleb and Kay's car collides with one on their way home from the party, one appears ominously to Julie when she's alone in the woods, and, of course, there's that teenager—never resonates with clarity, coming across as a gimmick intended to provide cohesion to a muddled piece. Structurally, Brewer traps herself into far too many two-person scenes, and the alternation of party scenes with car scenes in the first part is predictable and repetitious, not to mention awkwardly staged by director Mike Klar in the tiny, exit-challenged Theater C (that poor dying wolf has to get up, go out, come back, and lie down again entirely too often, each time carrying a pool of blood with it).

Brewer does have an ear for contemporary speech that she then heightens with attractive literary invention. But her characters lack dimension, in part because their problems are too familiar. This hampers the nine-person cast, though their work is always solidly professional.

Best is Julie Fitzpatrick's Sasha, the former lesbian. In her first appearance, she's a figment of her ex-lover's imagination, and Fitzpatrick gives the part an intriguing wildness. Then, when we see what she becomes, it drives home how much her ex idealized her to suit her own needs. Josh Tyson and Elizabeth A. Davis make the implosion of Caleb and Kay believable, though hardly riveting, and Megan Tusing, as Jenny, a randy young woman tripping on Ecstasy who goes after Caleb at the party, enlivens the stereotype she's been handed through an affectingly artless naturalism.

Ultimately, "Wolves" plays like a series of acting-class scenes. There's some good work here and there, but a satisfying whole never coalesces. Indeed, one gets the sense that the playwright is too engaged in a conversation with herself to have one with us.