A Woman, a Gun, and a Noodle Shop 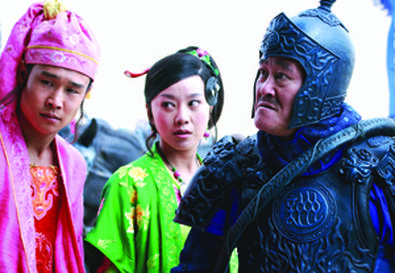 Crooked cops, daring heists, infidelity, murder—these are the elements that ignite the combustible chemistry of a fine noir film. But not all noir involves foggy cityscapes, smoking detectives, and Tommy guns. Sometimes noir happens in the least likely of places. "A Woman, a Gun and a Noodle Shop" re-imagines the film "Blood Simple" and transposes the Coen brothers' debut thriller to a whole new world: an isolated outpost in the desolate desert beyond the Great Wall of China. Director Zhang Yimou ("House of Flying Daggers," "Hero") mixes the oeuvre of the brothers Coen into a rich genre soup. With one part Western, two parts noir, and a pinch of dark comedy, "A Woman, a Gun and a Noodle Shop" explores the whimsical cross-pollination caused by the confluence of Eastern and Western traditions.

An old, greedy noodle-shop proprietor named Wang (Ni Dahong) lords over his wife and three employees who live behind the red clay walls of his desert fortress. Mars would seem less remote. Disenchanted with Wang's cruelty, his wife (played ebulliently by Yan Ni) begins an affair with Li (Xiao Shenyang), a cowardly cook, who can spin and throw noodles in impressive, nearly acrobatic displays. Tired of Wang's offenses, the wife buys a gun from a Persian trader. With the primitive gun comes temptation of power: Wang's wife plans to murder her husband and run away with her endearingly nervous lover. But when Wang discovers the affair, he secretly hires a sinister patrol officer, Zhang (Sun Hunglei) to kill his cheating wife and her suitor. It's all the makings of a great country song, Chinese-style.

The performances are excellent. Ni wades through a gamut of emotions; she's a particularly hilarious scorned wife, performing physical comedy feats alongside Shenyang—who makes his big-screen debut as the bungling and emotionally inept Li—and her blood-curdling scream is admirable. With his quivering lip and shaky legs, Li's trembling fear conveys the terror of being hunted by a machinelike murderer in a stark landscape where there is nowhere to hide. Hunglei does not breathe life into the malicious cop Zhang; instead he sucks the life out of him, creating an ice-cold, stony-faced killer whose heart beats only for money and death. He is a Chinese Anton Chigurh, patrolling the barren wasteland, his creaking leather armor breaking the desert quiet as he stalks.

With a fine balance of beautiful scenery and costumes, dark humor and breath-holding moments of suspense, "A Woman, a Gun and a Noodle Shop," serves up whimsical thrills at the ends of the earth.