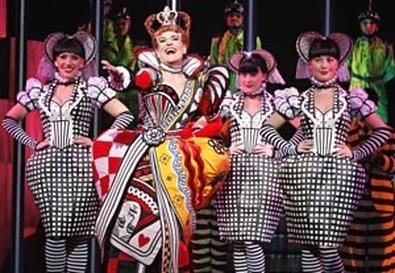 If you put the script of "The Wiz," a self-help book, every pop tune of the past 10 years, and some lame jokes about easy targets like the Tea Party and Disney into a blender, the result might resemble the gloppy mess on stage at the Marquis Theatre. "Wonderland" is an attempt to update Lewis Carroll's classic children's books in contemporary musical theater terms and to cash in on the family market captured by "Wicked," "Shrek: The Musical," and "The Lion King." Frank Wildhorn's generic score, Jack Murphy's undistinguished lyrics, and the cartoon-level book by Murphy and director Gregory Boyd may amuse the under-12 set, but they fail to offer anything of interest for adults.

The book pushes Carroll's delightfully mad creatures through a sieve of sentimentality and refashions the dreamlike plot into a retread of "The Wizard of Oz" and its 1975 African-American-flavored update. Instead of an inquisitive Victorian child, Alice is now an overworked mother, separated from her husband and struggling to raise their daughter while eking out a salary as a teacher in the Bronx. (If you'll recall, the heroine was also a schoolteacher in the movie version of "The Wiz.") She finds herself in a fantasy world by means of a fall down an elevator shaft, in place of the original rabbit hole. Rather than engaging in word games and logic puzzles with the Wonderland denizens, this Alice becomes a pseudo-Dorothy, palling around with bizarre male protectors (the Caterpillar, Cheshire Cat, and White Rabbit substituting for the Scarecrow, Tin Man, and Cowardly Lion) who spout psychobabble about finding yourself and going with the flow. In one bold departure, Alice is given a mature romantic interest, Jack the White Knight, who is now a 40ish boy-band lead singer rather than Carroll's adorable elderly eccentric.

Inevitably, Alice is imprisoned in the castle of the Wicked Witch—sorry, I meant the Mad Hatter. Yes, this version features a distaff Hatter, one with a definite taste for S&M. Her Act 2 outfit would not be out of place in a leather bar. There are even numbers with the same subject matter as songs in "The Wiz"—the joys of home and finding your courage—in which Wildhorn substitutes his trademark syrup for "Wiz" composer Charlie Small's funkalicious flash.

Boyd's staging at least keeps things moving at a steady pace. The actors work hard for their salaries, and most display impressive vocal chops, particularly Janet Dacal as Alice, young Carly Rose Sonenclar as her precocious daughter, Kate Shindle as the kinky Hatter, and Darren Ritchie, doubling as the chivalrous knight and Carroll himself, who appears in an extraneous, action-stopping scene. But they don't transcend the script's paper-thin characterizations.

Only Karen Mason's Queen of Hearts captures the gleeful insanity of Carroll's original. Decked out in costume designer Susan Hilferty's sumptuous playing-card ensemble, the dynamic, zany Mason briefly rescues the show in her two numbers, but she vanishes too quickly. When she quips, "I'm the real headliner here," truer words were never spoken. Hilferty's splashy Wonderland duds do create an arresting visual picture of a beguiling alternative universe, but when you go out humming the costumes, it's a sure sign of a failed production.