The 1 Word That Embodies the Rockettes 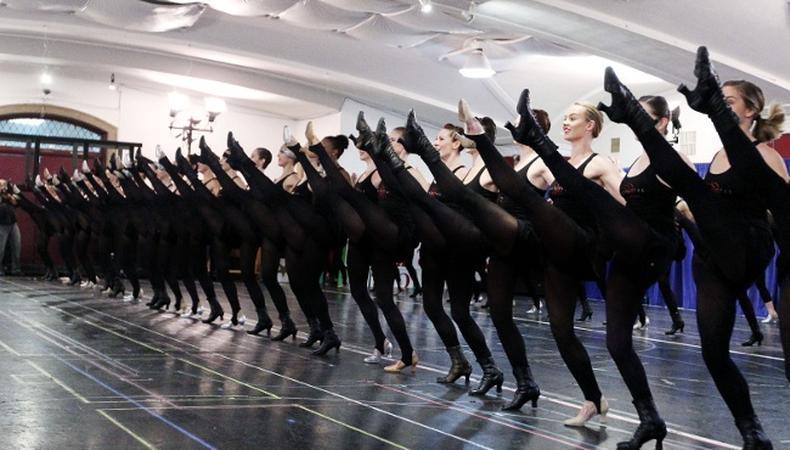 One can’t understand what goes into the precision of the Rockettes dance company until a rehearsal is observed. It’s early October, exactly one month before the opening of the Radio City Christmas Spectacular, and in the basement of the Church of St. Paul the Apostle, just near Columbus Circle, the dancers are poised and awaiting their cue.

Dozens of legs pointed forward and slightly out to the side, right hand on right hip, shoulder back. Left arms up at a 45-degree angle, wrists flicked; high chins, big smiles. One of the instructors calls out to a dancer: “Pull your left arm back. Too far. Now split the difference.”

This exactitude is part of what makes the Rockettes who they are: nationally recognized athletic precision dancers.

“The Rockettes have always embodied grace and beauty and strength,” says dancer Gabrielle Del Re, who’s entering her 16th season with the company. “We’re well-rounded dancers who are capable of doing anything, which is amazing, but seeing each year how we’ve evolved, not only as artists but also as performing athletes, has been amazing.”

Del Re, who landed her place in the company when she came to audition with her older sister—“never dreaming I’d get it”—says the heightened level of athleticism is the biggest change she’s seen during her time on the Radio City Music Hall stage. “Snow,” a number added to the Christmas Spectacular last year, has the dancers performing intense jazz and ballet technique while traveling up and down elevators onstage, all amid a winter wonderland featuring free-floating snowflakes that measure approximately 4 feet in diameter.

“We’ve never done something like that before, especially at the end of a 90-minute show,” says Del Re about the addition of the elevators coupled with the intensity of the dance. “You really have to have a lot of strength to be able to accomplish something like that, and 15 years ago, we weren’t doing that type of strenuous dancing. We’ve really evolved into a fresh, contemporary company.”

The appearance of “effortlessness” is essential to the Rockette performance (the word is repeated several times throughout the open rehearsal as a reminder), but hitting high kicks like the ones they’re known for is a far cry. According to Del Re, the company rehearses six days a week for seven hours, drilling choreography and positioning—with the assistance of floor markers to ensure each person is in the right place—in order to perform up to six shows a day.

“We have a grid on our stage and we have what we call depths, so we have colored lines and dashes on the stage,” she explains. “Standard companies have center stage and fourth and quarter, but we have a number line and multiple lines and dashes. Every step that we’re doing, we have a specific mark that we have to be at. We just have to get everything ready before we step onto the Radio City Music Hall stage.”

For one dance number, the women move in circles facing outward with their arms linked, nailing their eye-high kicks. “Some of us have loose legs today. We can raise them if you want!” choreographer Julie Branam says to the room, referring to the standards for kick height. This is met with a chorus of giggles—the same ones that erupt when Branam later shouts “Merry Christmas!” over the musical accompaniment

After the number’s up, the company members are breathing heavily and perspiration can be seen on their foreheads. And then they line up for their signature move. Rehearsal has practically just begun.

“Remember! Effortless!” is heard just before the legs fly.

Inspired by this post? Check out more of our dance coverage!

Briana Rodriguez
Briana is the Editor-in-Chief at Backstage. She oversees editorial operations and covers all things film and television. She's interested in stories about the creative process as experienced by women, people of color, and other marginalized communities. You can find her on Twitter @brirodriguez and on Instagram @thebrianarodriguez
END_OF_DOCUMENT_TOKEN_TO_BE_REPLACED