The Work of a Warm-Up Comic 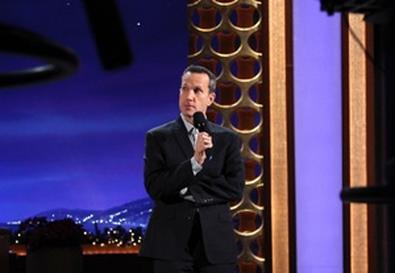 Kelly is one of a number of experienced comedians who supplement their incomes by entertaining and energizing TV studio audiences before and between segments of talk shows. They ad-lib and improvise while playing morale booster and host, setting the tone and letting the audience know when to applaud or stay silent.

Egos are checked at the door. Kelly, who has been with "The View" for six years, says, "It's not about me or always being funny. The trick is to have fun with the audience. It's about them and your shared experience." He gently toys with the attendees, affectionately deriding the pretensions of a cool-looking man sporting sunglasses indoors or requesting an older audience member to read aloud a few racy sentences from "Fifty Shades of Grey." The senior complies. It's all in good fun and everyone laughs appreciatively.

When Brody Stevens was warming up audiences on "Best Damn Sports Show Period," he fostered hooting and hollering, whereas on "Chelsea Lately," his goal was to create an upscale ambience. "You want them to applaud, not scream," he says.

The show itself is rarely fodder for laughs. Richie Byrne, a warm-up for Dr. Oz, says he will never make fun of the guests or what's talked about on the program. Trauma and disease are not grist for the comedy mill.

Early hours are another challenge. A warm-up for 18 years (most recently on the now wrapped "The Martha Stewart Show"), Joey Kola arrived at least two hours before show time in order to familiarize himself with the script and meet with staff and crew. "A warm-up guy is not staff or crew, but you'd better have close ties to both," he says. All concur "people skills" are at a premium for the warm-up on either side of the footlights.

Warm-ups can work eight hours a day when several segements are taped; and between-segment snippets may run 45 minutes or longer if a technical glitch surfaces. Warm-ups are prepared for contingencies. Some juggle, do magic, and/or lead the audiences through games. Others arrive with a bag full of silly props.

Most are men. But Dena Blizzard, who is currently warming up the audience for Anderson Cooper's chat show, says she has never experienced discrimination within the industry and enjoys a good rapport with the largely female audience.

Kola believes all the warm-ups are highly trained top talent, calling them "the green berets of stand-up comics."

On the flip side, Kola's years as a warm-up have served him well as a stand-up, sharpening his wit, intuitive powers, and speed. For Stevens, the experience has made him even more fearless. He says he has a degree of flexibility and can quickly recast his language and vision, regardless of an audience's demographics. Blizzard says that after doing warm-up, all other performances are a piece of cake.

Are Warm-ups The Background Players of Comedy?
The question persists: Has the warm-up typecast himself out of more serious gigs? "Many comics feel, 'Once a warm-up, always a warm-up,'" says Stevens. "But it's not as rigid as it once was since many are doing professional comedy elsewhere." For him, time limitation was the big issue since he wants to audition for films. He has not done warm-up for two years. "It's taken me that amount of time to get the warm-up taste out of my palate."

Comedian Jimmy Pardo doesn't much like the taste either. Indeed, his brand of warm-up on "Conan" is not unlike a 15-minute opening act club performance. He refuses to work the crowd, generating enthusiasm before the show or offering witty commentary during commercial breaks. "I'm too cynical to be a hand-holder," he says. Pardo suspects his brand of warm-up may replace the standard fare. He has little doubt it has led to opportunities for him, most notably the chance to create a pilot for Comedy Central. Pardo's goal is to host his own show. "I'd be happy to have the time slot after 'Conan' on TBS," he says.

But for most, doing warm-up has been a financial and emotional meal ticket between now and stardom. "There is the danger of being typecast, but before I was typecast as an unemployed comic living with my mom," Kelly says. "I think it's a career liability not to be working. This is not the top of my mountain, but if it all ends tomorrow, I've had a great run. Every good thing I have is thanks to 'The View,' including moving out of my mother's basement."