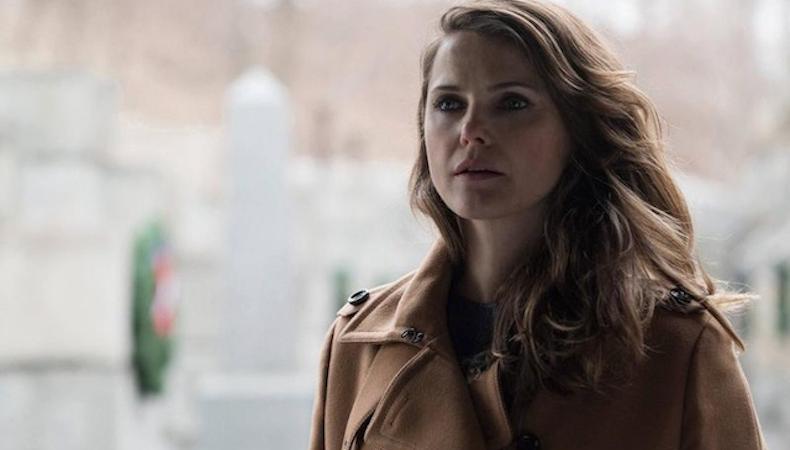 “American Crime” (ABC)
ABC and showrunner John Ridley one-upped themselves with the second 10-episode outing of this anthological miniseries. With much of the Season 1 ensemble returning—including standouts Timothy Hutton, Felicity Huffman, and Regina King, along with newcomer Lili Taylor, Season 2 explores racial and class tensions within an Indianapolis private school. When a working-class male student (Connor Jessup) accuses two championship basketball stars (Joey Pollari and Trevor Jackson) of sexual assault after photos of the alleged incident appear online, the school becomes a hotbed of administrative cover-ups and false accusations, and the battleground for one tenacious mother’s pursuit of the truth. “American Crime” succeeds in its sobering representation of a faulted world we know so well—one which the series reveals time and again cannot make us complacent. —Benjamin Lindsay

“The Americans” (FX)
FX’s Cold War espionage drama finally got the critical and audience reception it deserved this year, with a handful of Emmy nominations (including best drama series and acting nods for stars Keri Russell and Matthew Rhys) and a second win for guest actor Margo Martindale. Season 4 opens just after the cliffhanger of Paige (Holly Taylor) telling Pastor Tim (Kelly AuCoin) that her parents are KGB spies, but the series wisely takes its time playing out the repercussions of her actions. Efforts to silence Tim and his wife, Alice (Suzy Jane Hunt), are further upended by the introduction of glanders, a disease caused by a deadly bacteria filched from the Department of Defense. At the center of it all, though, are the Jennings and their struggle to be there for each other as a family in the least likely and most trying of situations. —BL

“Downton Abbey” (PBS)
We’ll miss the Crawleys, their household staff, and the quiet yet riveting minidramas that played out so beautifully between them. Julian Fellowes’ upstairs/downstairs import from England captured the American imagination (and awards seasons) in ways surely no one involved on the show expected. Throughout it all, Hugh Bonneville, Elizabeth McGovern, Michelle Dockery, Laura Carmichael, Joanne Froggatt, Allen Leech, and Brendan Coyle—plus, of course, Maggie Smith as the unforgettable Dowager Countess of Grantham—showed admirable restraint in their performances, never a discordant note in the symphony of their collective storytelling. In their final season, the “Downton Abbey” cast proved alternately hilarious and heartbreaking, bringing their beloved characters some of the resolution they deserved. —Jack Smart

“Fargo” (FX)
FX has been slowly but surely upping its awards tally, and with series like “Fargo”—Noah Hawley’s riff on Joel and Ethan Coen’s Midwestern masterpiece—it’s no wonder. Season 2 blew us away, thanks in no small part to its willingness to let every character wander between eccentricity and nihilism as bitter cold as a North Dakota winter. Kirsten Dunst, Patrick Wilson, Jesse Plemons, Ted Danson, Jean Smart, and breakthrough scene-stealer Bokeem Woodbine understood their story’s distinctly offbeat voice, one that can’t be found anywhere else on television. It’s a shame the show is so violent; with each gruesome dispatching of a character, we resisted saying goodbye to another superb actor. —JS

“Game of Thrones” (HBO)
With the White Walkers gaining momentum just beyond the wall, the stakes of “Game of Thrones” reached new heights in Season 6. HBO’s critical darling also boasted series-best performances this round from 2016 supporting actor Emmy nominees Peter Dinklage, Kit Harington, Lena Headey, Emilia Clarke, and Maisie Williams. The women, in particular, dominated; Arya Stark’s journey from blind beggar under Jaqen H’ghar (Tom Wlaschiha) to eventually reclaiming her family name offered the young Williams this season’s most richly layered and emotionally engaging arc. That’s not to say we didn’t love Sansa (Sophie Turner) enacting the sweetest revenge, or Cersei (the masterful Headey) reclaiming something of her own: a heartless and calculating badassery, and the Iron Throne with it. Season 7 can’t come soon enough. —BL

“Mr. Robot” (USA)
We’ll be honest: writer-director-evil-genius Sam Esmail couldn’t keep all his plates spinning in the sophomore outing of USA’s hit hacker drama. The cinematography was still utterly riveting, the suspense still superb, but pacing and credibility issues plagued a plot trying too hard to outdo its first installment. Yet this makes the achievements of the “Mr. Robot” cast all the more remarkable: having mastered the show’s distinct style, the actors managed to keep enhancing it. A glance, a twitch, the subtlest intake of breath—few other TV ensembles say so much by doing so little. Swept up in the brooding paranoia of Elliot Alderson’s parallel world, we need the human yet flashy performances from Carly Chaikin, Portia Doubleday, Christian Slater, Grace Gummer, Craig Robinson, BD Wong, and, of course, star Rami Malek to keep us focused and hungry for more. —JS

“The People v. O.J. Simpson: American Crime Story” (FX)
Although it was a competitive year for prestige cable miniseries, few were surprised when Scott Alexander and Larry Karaszewski’s true-crime anthology dominated the Emmy Awards. Every delight the FX show provided felt doubled; audiences were reinvested in O.J. Simpson’s murder trial because the actors played 1995 public figures not as homages, but as living, breathing humans whose stories resonated all too well in 2016. Individually, Sarah Paulson, Courtney B. Vance, Sterling K. Brown, David Schwimmer, John Travolta, and Cuba Gooding Jr. delivered career-best work; together, the cast of “People v. O.J.” combined both grounded realism and drama as heightened as it felt the first time the Trial of the Century took over our screens two decades ago. —JS

“Queen Sugar” (OWN)
Ava DuVernay portrays a grab bag of big themes for her first foray into television, a completely female-directed, 13-episode order on Oprah Winfrey’s OWN. Centered on Nova Bordelon (Rutina Wesley), a journalist who unexpectedly inherits her family’s sugar cane farm, it’s a story of love and sacrifice under the Louisiana sun. After the death of their father, Nova and her estranged siblings, ex-con Ralph Angel (Kofi Siriboe) and basketball player wife Charley (Dawn-Lyen Gardner), reunite on their homestead. It’s not long before tensions flare, giving the ensemble meaty material to work with each episode. “Queen Sugar” dips into the ripple effects of infidelity, drug addiction, and poverty with supporting help from Bianca Lawson, Dondre Whitfield, Nicholas L. Ashe, Tina Lifford, and Omar J. Dorsey. Already renewed for a second season, we’re intrigued to see where the Bordelon family’s story goes next. —Briana Rodriguez

“Stranger Things” (Netflix)
It’s safe to say no new streaming series received as much buzz this year as Netflix’s “Stranger Things.” And its nostalgia factor and Winona Ryder headline credit weren’t the only elements this ’80s-set show had going for it. Child actors Finn Wolfhard, Gaten Matarazzo, and Caleb McLaughlin deliver star-making performances as a group of friends who stumble across a young girl (the ineffable Millie Bobby Brown), the telekinetically charged runaway from a creepy government experiment. Factor in David Harbour as a hardened sheriff with something to prove, Natalie Dyer, Charlie Heaton, Joe Keery, Shannon Purser, and, of course, Ryder (snatching the title for Badass Mom of the Year), and it’s clear the Duffer brothers know how to pick a cast. —BR

“This Is Us” (NBC)
One of network television’s most highly anticipated new series of the fall, “This Is Us” lives up to the hype. Starring “The People v. O.J. Simpson” Emmy winner Sterling K. Brown, Milo Ventimiglia, Chrissy Metz, Chris Sullivan, Jon Huertas, Justin Hartley, and Mandy Moore, the NBC series follows a group of people who all share the same birthday, and decide, upon turning 36, to make big life changes—from an overweight woman choosing to get into shape to a man seeking out his estranged biological father. The show follows a nonlinear structure that allows minute, seemingly insignificant moments to set up walloping emotional punches. Just how powerful they turn out to be is a testament to the skills of the sprawling but united “This Is Us” cast. —BR

Inspired by the dramatics? Check out our TV audition listings!