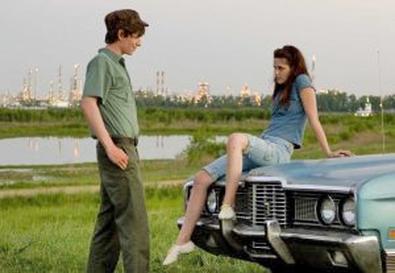 Independently made by six-time Oscar-winning producer Arthur Cohn ("Garden of the Finzi Continis," "One Day in September"), originally premiering at the 2008 Sundance Film Festival and released at the end of that year sans distribution for a one-week Oscar qualifying run, "The Yellow Handkerchief" finally found a distributor in the Samuel Goldwyn Company and now formally begins its run in theaters. Even with überhot Kristen Stewart ("Twilight") in a leading role and actors the caliber of William Hurt and Maria Bello, this provocative and lyrical road movie is not an easy sell. Its leisurely paced, laid-back Southern vibe (it was shot in Louisiana) with an emphasis on four disparate characters isn't the sort of commercial picture that gets released by studios these days. So it's nice to see it hit theaters rather than a straight-to-DVD fate many films like it face.

Brett Hanson (Hurt) is an ex-con fresh out of prison for manslaughter. He is now roaming the world, trying to adjust after six years away. He meets a troubled teen named Martine (Kristen Stewart) and her friend Gordy (Eddie Redmayne) and they hook up on a road trip that has major consequences for each. Martine is running from her family, Gordy is hoping to spark a relationship with Martine, and Brett is contemplating his future by returning to his past life with May (Bello)—a relationship that didn't end well the first time. The 'road' defines the obstacles this trio individually faces as they help one another, however unwittingly, in losing the baggage of their recent past and carving a path toward tomorrow.

With two-time Oscar winner Chris Menges' as DP, the stunning images of the backroads of Louisiana vividly brings to life writer Pete Hamil's 1971 short story about the human connection of three wounded souls. Director Udayan Prasad and screenwriter Erin Dignam know the emphasis is on character and let four fine actors bring their A-game to the table. Hurt, shy and slow to warm, has never been better with an indelible portrait of a man trying to reconnect with a life he can barely remember. In flashbacks, we see his previous life with his wife, played smartly and sparingly by Bello. His driving companions seem complete opposites, with Stewart shedding the dour expressions of her "Twilight" films and showing great promise as a lost 15-year-old who flaunts her sexuality to get noticed. Redmayne is terrific as the somewhat nerdy and insecure potential boyfriend.

"The Yellow Handkerchief" is a modest and engaging story—not more but not less. With Stewart's newfound popularity as a marketing magnet, it would be nice to think that this very human little movie may still find an audience willing to succumb to its charms.