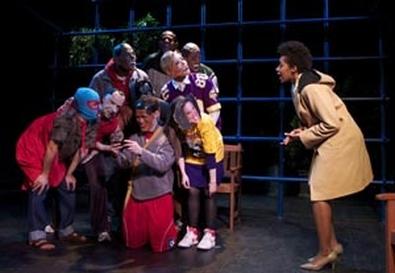 Photo Source: Ross Bell
When there's as much talent on display as there is at "Yes We Can"—from playwright Daniella Shoshan's extravagant gift for contemporary speech to director Alec Strum's lightning staging to the bright, sharp performances of the gifted 10-person cast of young newcomers—it's particularly dispiriting to have to report that the show nevertheless comes across as one hot mess. Too many ideas are muddied by too many theatrical styles in this attempt to prove that we are a long way from the post-racial society some pundits predicted in the wake of Barack Obama's election. As my parents used to sadly intone when I got sick from gorging on too many sweets, "Your eyes are bigger than your stomach, young man."

Set in New York City in the five days leading up to the 2008 presidential election (something Shoshan never convincingly connects to her script), the play starts on the wrong foot with a prologue involving cast members in head-covering rubber celebrity masks talking around and over each other, mostly in colorful street slang. Not only do the masks hinder intelligibility, but the dialogue is so random and the speakers are so anonymous that we have no idea what is happening or why. As the play moves on through short scenes featuring a head-spinning collection of characters, we begin to realize that certain stories are being followed. The most prominent is that of a demure African-American woman who is appalled when a foul-mouthed black man tries to chat her up on the bus and assumes she is black. She insists she's not, but the assumption rocks her world and sets off a bout of soul-searching.

Shoshan examines constructed racial identities through an intriguing device. A Jewish lesbian's colorful New York speech patterns and vocabulary suddenly switch into florid gangsta-speak when she gets angry at her unseen longtime lover. An older rabbi morphs into a charismatic black preacher in mid-sermon. Unfortunately, the device is used too inconsistently to have more than transient effect.

Performances that stand out include Judith Dry's hilarious lesbian (don't cross her), Duane Cooper's inspired rabbi (his sudden call to Jesus in shul is a riot), and Makeda Declet's wide-eyed young woman who's not black. Meera Rohit Kumbhani is a hoot as a conservative Indian mother increasingly bewildered by her sad-eyed Americanized son, while Dax Valdes shows impressive range switching between that son and a Chinese small-business owner who can't quite master English pronunciation.

There's a fine line between intriguing and confusing an audience, and Shoshan and Strum cross it far too often. They need to buckle down, decide on the play's essential elements, and then start paring away, so their mosaic structure of accreting details can finally form a satisfying picture. The talent is there; the discipline has yet to be arrived at.