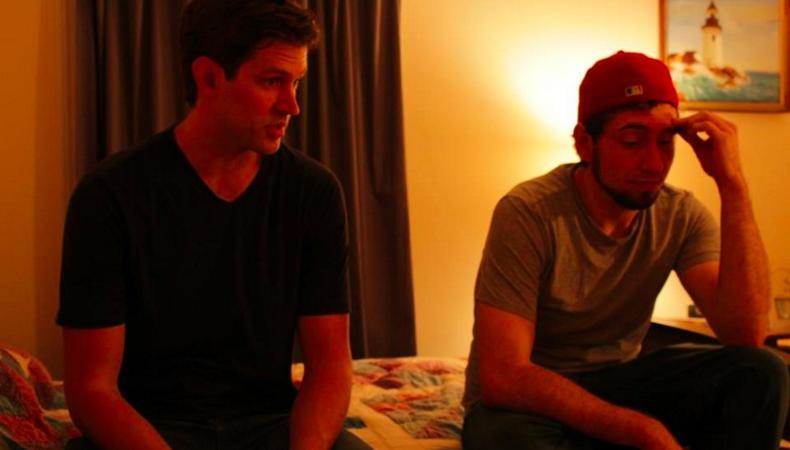 When actor Matthew C. Flynn read the script for Jonathan D’Ambriosio’s “The Frogmarch,” he thought it was for a horror movie. But 10 pages in, he realized there were no ghouls, no monsters, and no ghosts in this story’s cabin in the woods. “As soon as I finished the script, I called Jonathan and asked if he was sober. He was speechless—he didn’t say anything. But at that point, I had been sober for 10 years and there was no way somebody who wrote this film could not be sober.”

The film (which just won the Independent Spirit Award at the New Hope Festival) follows a weekend intervention for a friend struggling with substance abuse. It resonated with Flynn, who has battled his own demons with alcohol. He was immediately on board as a cast member.

“I have a rule for the projects I choose,” says Flynn, who has worked on big-budget projects such as “Blue Bloods.” “The pay must be embarrassingly good or the story has to be otherworldly.”

Flynn plays Luke, a hardass New Englander who is friends with the addict. He admits there was very little that connected him with the character besides Boston roots and a tough guy shell hiding a soft interior. That tough guy shell initially may have deterred Flynn from acting altogether.

“I went into the drama department junior year of high school and it was a bunch of drama kids doing drama kid stuff. I was just scared of being in that world—I was too consumed into being cool. I didn’t act ever until I was three years sober when I took an acting class in college.”

Years later as a struggling actor in New York, Flynn, who cites screenwriting as his first love, started producing their own content with friends. You may recognize Flynn from the popular “Background Anthem” (a rap parody about the world of background work set to Eminem) and “A Relationship in Five Minutes,” a hit which ended up accumulating over 1.3 million hits on YouTube. “I found guys that shared my pain in the acting world and saw the ridiculousness and comedy in it. We realized we had to do it ourselves because no one will call us and bang on our doors to give us a job.”

Flynn refers to “A Relationship in Five Minutes” as “lightning in a bottle.” After submitting the one-shot, improvised video to countless sites, bloggers, and press outlets, dating site How About We picked it up. When Flynn and director Court Dunn re-submitted the updated press release with the link to an article on How About We, the video generated thousands of views. “It gave me a renewed sense of hope in this business, especially in regards to creating your own work,” says Flynn.

It was a natural transition for him to produce "The Frogmarch," which had a total budget of only $8,000. When asked how it’s possible to shoot a feature on such a small budget, Flynn says, “Aspiring filmmakers need to take a look at what they are making. If you are shooting something low cost on location with not a lot of cast and no need for recognizable talent, you don’t need as much.”

What was different for Flynn was acting as a lead in a feature for the first time. The theatrically trained actor says he only had limited experience working out of sequence. “When you are working on a feature and you’re one of the principal actors co-starring in an ensemble, it’s really important to read the script over and over again until you know it better than you know the back of your hand. It should be second nature. It’s that much more important on a feature film without necessarily having the build up and momentum of previous scenes to get there.”

While he hopes his work in front of and behind the camera on “The Frogmarch” gets him to the next level creatively, he and the director want people to think about their own potential addictions or the addictions people already face. “To start that conversation is imperative for us,” says Flynn. “And I’m really looking forward to seeing what else we can do.”

Want to star in a feature film? Check out our film audition listings!

Veronika Claghorn
Veronika Claghorn has been a part of the Backstage team for over five years. Prior to working with us, she worked in extras casting for large budget film and TV projects like Paramount’s “Teenage Mutant Ninja Turtles” (alongside fellow Backstage staffer, Eli Cornell) and Christopher Nolan’s “The Dark Knight Rises.” She got her start in Philadelphia casting for M. Night Shyamalan and producing for A&E. She is now based in Atlanta and continues to freelance cast principal roles in commercials and independent films.
END_OF_DOCUMENT_TOKEN_TO_BE_REPLACED