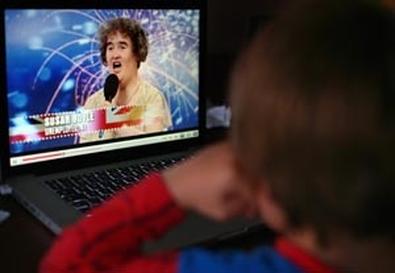 Photo Source: Getty Images
A 55-second video of a baby biting his brother is about to make the parents a bunch of money.

Here's how it works: YouTube will constantly identify videos that are rapidly gaining popularity, then ask owners of those videos whether they'll allow ads to be attached. YouTube won't disclose the split except to say the bulk of the money goes to those who post the video.

Ads on YouTube videos aren't new, but previously, only the most prolific users were invited to participate in the YouTube Partnership Program and profit from advertising. A 16-year-old boy known as "Fred," for example, earns six figures a year that way.

Tuesday's rule change makes it possible for one-hit wonders to join the fun. It used to be that YouTube attached ads to thousands of Partnership Program videos, but now it will be tens of thousands, Zamost said.

YouTube is selling text ads, banners and graphic overlays for as much as a sizable $20 cost-per-thousand viewers, targeting audiences based on the video content or the demo of the viewer. Video ads might follow.

The most popular YouTube video of all time, "Evolution of Dance," watched 125 million times, isn't eligible because of music rights issues. Ditto with the more recently hot "JK Wedding Entrance Dance," which helped to sell a ton of digital downloads of Chris Brown's song "Forever" but didn't make any direct money for those who made and star in the YouTube video.

But for millions of other amateurs who didn't play fast and loose with copyrights, there's the potential for some moolah to go with their online fame.

Another is "Battle at Kruger," with 46 million views so far. It's eight minutes of water buffalos, lions and crocodiles fighting over a potential meal.

Then there's "David After Dentist," two minutes of a kid recovering from oral surgery that 28 million people have viewed; and "Otters Holding Hands," a video (needing no explanation) that has been watched 13 million times.

Google has been under the gun to monetize its $1.65 billion YouTube acquisition, and the revamped Partnership Program should help. Before launching it, though, YouTube needed to build out its content-management tools and other infrastructure.

"We had to make sure the program could handle this kind of scale," Zamost said.