Zelda Williams on Playing a Trans* Character on TV 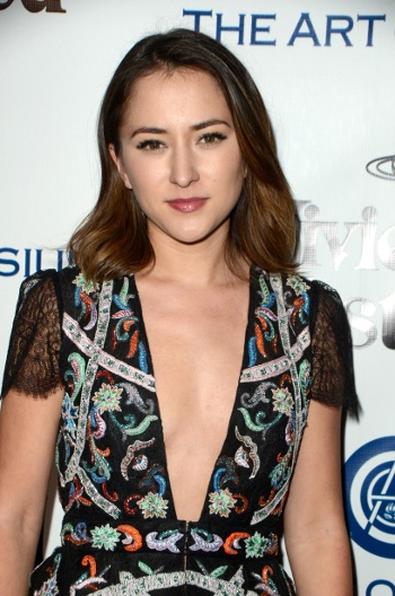 Daughter of the late legend Robin Williams, Zelda Williams breaks out this season as one of the most intriguing characters on Freeform’s ’80s-era “Dead of Summer”: a transgender camp counselor named Drew.

On deciding to become an actor.
“I probably decided when I was, like, 10. But I’m grateful my parents said, ‘Absolutely no way,’ and staved off my curiosity and interest. I think I did ‘House of D’ when I was 15. That first experience was wonderful and eye-opening.”

On auditioning for Drew.
“Truthfully, when I went in for my first audition, I thought I’d talked myself out of a job because I said, ‘You know, politically speaking, I’m not sure you’re doing the right thing by auditioning cisgender actresses.’ The problem is, which they then explained to me, [is that] Drew is seen in both genders because [of] the flashbacks. That is a difficult thing to ask of someone who is [transgender and] so proudly transitioning…to put on prosthetics and go backward. In Drew’s case, he is living as a man, but is still physically female. So it offered challenges that I understand why they considered me.”

READ: “15 Trans* Actors You Should Know”

On why she’ll never do standup.
“Standup is a realm that I can’t even imagine taking part in simply because—I can’t even think of what would be a good example of what that would be like. I mean, trying to be a gladiator when your dad was Hercules? What would be the point? It would be like gloriously falling on a spear just so everyone around you could say, ‘Oh, well she tried!’ I’m happy doing what I do.”

On ensuring Drew’s authenticity.
“I grew up in San Francisco, which is an incredibly open city in a lot of ways, and I do have a couple of female-identifying trans friends. But I realized very quickly that I didn’t have any male-identifying trans friends, and so I had to reach out and talk to other friends and get in touch with as many male trans members of the community as I could. It was incredibly helpful. I think more than anything, given what I’m doing, not everyone is going to be happy about it, but as long as it’s not a stereotype and as long as I can play him honestly and with as much truth as I can manage.... I think that they were very happy to hear that there was a portrayal happening at all.”

On her varied voiceover career.
“People have walked up to me in bars and said, ‘Your voice is so interesting, I love it.’ I was made fun of for it as a kid. But I think when you grow up and you start to accept the things about yourself that are different, it really starts to shine. For me, I was scouted a number of times and I just didn’t pay attention to them. But then I finally took real interest in it. I’d been asked so many times, ‘Why don’t you do the voices in video games?’ And so I went, ‘Why don’t I?’ I just walked into Vox, the place that has been so kind to me and has me as a voiceover actor, and took a meeting with them and that’s the history for me…. It’s really become one of my favorite things that I look forward to every time I get to do a session. If anyone [reading] Backstage wants to pursue it, do it.”

Want a part on a show? Check out our television audition listings!