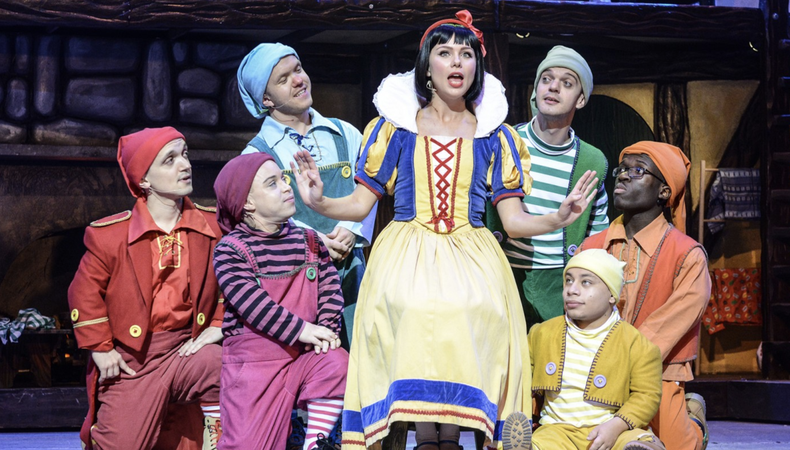 Around the country, men are cramming themselves into wigs and heels. Women are painting on swirly moustaches and audiences are launching into a rousing “it’s behind you” chant at the stage.

Panto, short for pantomime, derives from the Greek word pantominos, which translates as ‘all’ (panto) and ‘dancers’ (minos) ­– and this nicely sums up what a pantomime’s all about. A variety of panto has been around for hundreds of years and is probably one of the closest art-forms based on musical hall or variety shows left in Britain. They’re bawdy, brash and a lot of fun.

There are a few panto rules. It must be set in a non-real world. A true panto won’t do well set in a middle-class drawing room in middle England. Villains must enter stage left, and the good folk enter stage right. It’s made up of call-and-response and contains slapstick humour – as well as the sort of jokes that will appeal to both adults and kids.

So, given how fun and light-hearted pantos are, why do so many think they’ll hate it?

There is no fourth wall.
If there’s one thing British people fear more than anything, it’s being directly addressed by an actor. Even worse is when an actor tries to actually involve you in the show. Panto stamps all over this audience/stage boundary malarkey – audiences are expected to join in with the chorus of “he’s behind you” when a baddy approaches on stage – and if you don’t, you’re a bad sport.

But how is this a bad thing? You’ve spent the year seeing terrible shows at the theatre – and here’s your chance to yell at the stage and let that anger out. Come, bring some lozenges to get those vocal cords warmed up, and wholeheartedly enter into the spirit of Christmas by screaming at a panto dame.

“Actors love interacting with the audience. For the rest of the year they can’t, but when it comes to panto, they love to hear the reaction to what they’re saying,” says Emily Wood, co-director of Evolution Productions, a company that creates bespoke pantomimes for theatres across the country. “It’s such an important tradition that’s in danger of being lost, and that’s what panto is all about.”

It’s irrelevant. I only want to see relevant theatre.
If that’s your main bugbear about pantos then maybe you need to lighten up. It’s the holiday season! Luckily for you, panto scripts do try to remain relevant, and they’re frequently updated. Many shows reference current affairs because it updates the panto and makes it interesting.

“Take Cinderella,” says Wood. “We try to make things relevant and current, so we do mention Brexit and politics in our shows. Cinderella is a good example because when we got the script and sat down with it, we felt like it really needed an update. The last 10 years have seen so many changes for women. We’ve become so much stronger and we wanted to convey that – women don’t just sit around waiting for the prince to come and rescue them anymore!”

Audition for a panto production here!

It’s for kids.
There are certainly more children in the audience, than at, say, The Inheritance. For British people, many of whom still subscribe to the “kids should be seen and not heard” category, panto is terrifying. Your chance of catching a school-related cold is at its highest. But a panto audience is also comprised of grandparents and parents – it’s a full-on family affair.

“Panto is all about having all generations of one family, from 3 to 70, laughing at the same jokes. Sometimes I just go and watch the audience and stick my head around the door while the shows on to see their reactions,” says Wood.

It’s not funny.
It’s rare you’ll walk past a panto auditorium and see rows of stony-faced individuals silently staring at the stage in muted horror. Pantos are infectious. Just as crying at the Old Vic’s A Monster Calls or Patrick Ness’ Sea Wall is pretty much expected, so too is laughing at panto.

Jokes aimed at kids often have an adult-friendly double entendre that flies over little Jimmy’s head but entertains the rest of the family. Wood says: “Audiences love panto comedy. There’s a little bit of slapstick, and also some really funny jokes too – it doesn’t always need to be blue.”

You freak that the actors won’t be able to adlib and this makes you stress.
There are those that loathe improvisation out of fear that the actors on stage would freeze, turning the whole show into a cringe-fest.

If this is also you, you’ll be relieved to know that pantos are so tightly scripted that there’s little for actors to mess up. “A great panto actor might make it look totally effortless, making it seem as if there’s no script and it’s all ad-libbed. But that’s actually not the case: it’s scripted, and a testament to the great acting that the audience thinks it’s all off the cuff.”