Everything Actors Need to Know About Survival Jobs in the UK 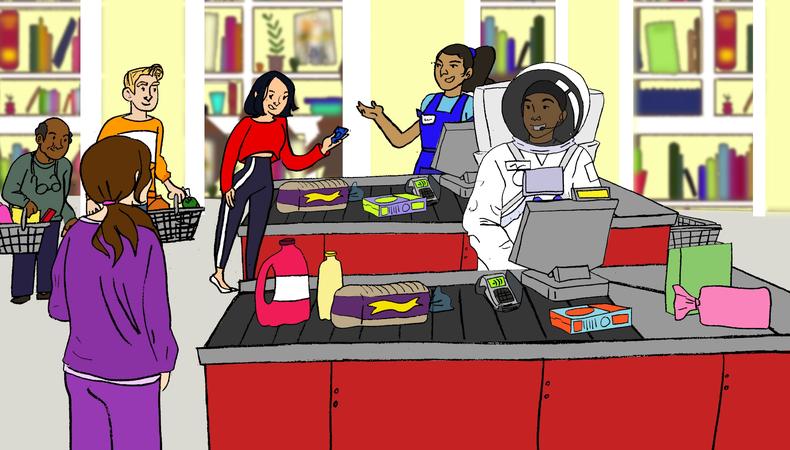 “If you want to be an actor,” the old saying goes, “you have to want it enough to also be a waiter.” It’s tough to introduce yourself as an actor if in reality you spend 35 hours a week teaching, working behind a bar, or shepherding tourists. But it’s also a reality that you’ll need something else to pay the bills and that something will likely take up most of your time. Even old hats have to deal with a side hustle, survival job, or vocal rest. So, here’s the Backstage guide to finding—and surviving—the survival job, with a little help from actors who’ve been there.

Why do actors need survival jobs?

Most actors need other work to help pay the bills because acting is an unstable, unpredictable, and often poorly paid career.

Unless you come from a background where you can afford not to work (looking at you, Tom Hiddleston and Eddie Redmayne), a survival job can pay bills and keep you busy until acting pays its way. And they’re not just for actors. Most creative careers require people to build up expertise and experience by working for free or for little money. It’s not fair, but it’s the way it’s always been. Maxine Peake was a lifeguard, Hugh Jackman was a party clown, and Sean Connery was a milkman, so you’re in good company.

On that note, having a survival job is not just for those starting out or a sign of doing badly. Even “jobbing actors” with steady acting work can be in need of extra cash, and some performers have side jobs to prepare for the bad times or keep busy around projects. Having other work also offers actors the ability to say “no” to projects they’d rather not do.

What survival jobs for actors are out there

The classic jobs for actors are ushering in theatres; temping in schools, offices, and call centres; working in pubs and bars; and waiting tables.

The thing all these jobs have in common is flexibility. After finding other work not flexible enough, performer Ryan Lane turned to substitute teaching through an agency because “you can always turn down a shift or cancel last minute if you get an audition or acting job.” Similarly, having more than one casual job generally means more flexibility. Actor Alex Wilson is “on the books at an office temping agency,” does “a bit of meet and greeting at an Airbnb competitor, and, more enjoyably, Harry Potter–themed walking tours” in order to be able to work around acting commitments.

There’s no wrong job for actors as long as it’s flexible enough to keep acting the priority. Find out what other actors are doing and, as Lane says: “Don’t be afraid to say you’re looking for work.” Actors are a supportive community and someone might just be able to help you land a job.

What else should I look for in a survival job?

Beyond being flexible, your ideal job should be reasonably well-paid and enjoyable.

Chances are you’re going to have to compromise on at least one of those things but, as actor Elle McAlpine warns, “don’t let yourself be miserable in your day job. Wherever you find yourself working, make sure it brings you some joy, even from the littlest things.”

Jobs like Wilson’s tour guide gig are perfect for “flexing those performing muscles” as he’s “delivering stories to groups of strangers twice a day.” He says: “It’s damn good training for hitting your beats, comic timing, reading your audience, improv, you name it.” However, he’s also honest about it being both “lonely” and “knackering.” The pros of working in jobs like ushering or behind a bar is that you’ll likely be with other actors and have a community to be part of. Go it alone as a kids’ entertainer or Uber driver and you’ll have a different set of pros and cons.

Although flexibility is important, it’s not everything. Performer Serena Flynn has sacrificed flexibility for a more rewarding job working with teenagers with special educational needs at a creative college. Unlike her former job as a receptionist, it allows her to work with “some of the funniest people I’ve ever met” and enjoy being the “rogue teacher” who takes pupils for “walks in nature and teaches them meditation and yoga.” The key is to find something that you enjoy because, as Lane says, “chances are, you’re going to be doing it a lot.”

What survival jobs are there for actors outside of London?

London’s size and gravitational pull for business means it has every conceivable survival job for actors. However, there are still plenty of options for those outside the capital.

For actors in cities that have year-round tourism (like Edinburgh, York, Bristol, and Bath) there’s lots of hospitality work, as well as jobs in galleries and entertainment, like living history roles or walking tours.

For cities like Glasgow, Birmingham, and Manchester, there’s plenty of temp jobs in offices and call centres, alongside retail work.

For actors in towns, delivery driving or tutoring is often the best way to work flexibly. And for actors close to the countryside, there are pubs, rural tourism, and seasonal work.

Remote work and “task” or “gig” apps mean you can (in theory) find work anywhere, but it’s worth exploring how much it’s possible to earn doing this before making the leap from more stable employment.

Does my survival job need to be relevant to acting?

Acting is a career that utilises a raft of skills, so it’s hard to think of a job that isn’t relevant to acting.

Most people agree that survival jobs should let you use and strengthen some of the skills employed in acting, such as public speaking or working in challenging and collaborative environments. But whether you need to be working within or parallel to the industry is for you to decide. Each option comes with pros and cons.

For actors working as ushers, there’s the opportunity to watch plenty of productions and see inside a working theatre. But some may find it difficult being so near, yet so far from lots of working actors. Then there’s being directly involved with productions—like McAlpine, who also works as an intimacy coordinator. A typical working day means “meeting inspiring people on some of the best productions onscreen, feeling challenged and getting to work closely with other actors,” but McAlpine also questions whether people within the industry now see her “as an intimacy coordinator instead of an actor.”

McAlpine’s work does allow for constant learning and development, which is good for all actors. She also says that in a tough industry, “if a job can allow you to acquire practical skills, keep learning, or get you on a set to gain experience and meet people, then it’s worth doing.”

How do I prioritise my acting career in a survival job?

There will be times when you need to get your head down and earn enough to pay the rent, but otherwise try to prioritise your acting career, whether that’s by taking time off for auditions or workshops or your own projects.

Taking a day off for an audition that lasts five minutes can be tough, especially on your bank balance. But ultimately, an audition is an opportunity whereas another day in your survival job just isn’t. Likewise, it can be hard to find time to reply to emails or look for castings. Lane suggests having a dedicated day each week “that you think of as time to focus on your career rather than a day off.” In addition, ensure your job leaves you with time to do things you enjoy because, especially if you’re starting out, it’s important to expand your knowledge of the industry and taste by seeing new film and theatre and meeting people.

When should I quit my survival job?

If acting work is paying the bills, then it’s worth considering leaving your survival job and giving your energy and attention to what you really want to do.

Likewise, it’s easy to get sucked into a survival job and find it taking over more than your time. Make sure your employer isn’t exploiting you and is aware this isn’t your career. Wilson describes his balance of survival jobs and acting as “definitely still a work in progress.” He admits “the temptation is to work as much as possible” but points out “that way exhaustion and poor mental health lie.”

Some actors have income targets which, once hit, mean the rest of your month can be for your own projects. However, it’s easy to say yes to more work, especially if you’re in a zero-hours role that might not pay as well the following month. Remember, there’s a difference between financial planning and neglecting your goals for a job that was meant to help you reach them. Wilson’s tip is to “be honest with yourself—these jobs are just for money and if you had to run away tomorrow, the company would be absolutely fine without you. It’s your creative ambitions that won’t be OK if you run away from them.”

Any last words of advice?

Lane’s top tip for those not enjoying their survival job is: “Stop, breathe, and take the time to find something you enjoy.” He also adds: “Don’t be bored! You’re too creative to be bored!”

For Flynn, it’s that “all experience is good experience, so you’re not wasting your time. Whatever you’re doing, it’s making you a more interesting and capable performer and person.”

Although McAlpine thinks she’s become better at balancing other work alongside acting, she makes the point that “I’m always an actor, it’s just sometimes I don’t get to do that. So, I make an active choice to find the joy in my every day, even if that’s just playing my favourite music when I’m doing boring admin or organising something I love doing after work.”