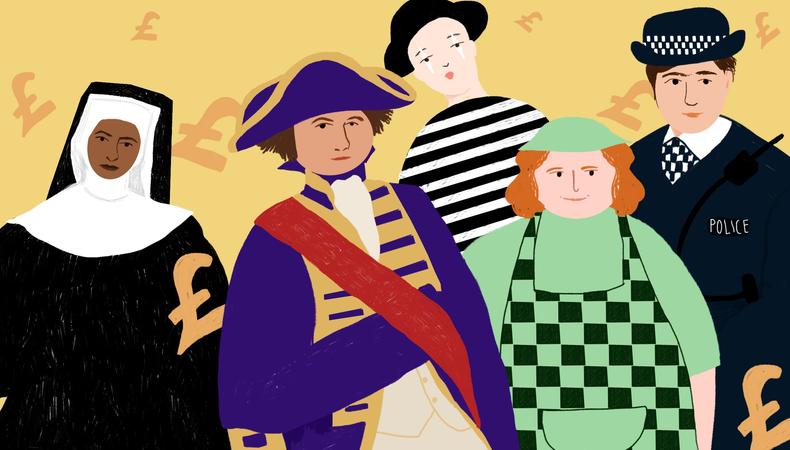 We’ve all watched films like Lord of the Rings and gone: “Just how many people are in this scene?” Supporting artists (sometimes called “extras”) are vital parts of any production: they help to create a believable set and can actually be a well-paid gig for actors keen to get film-set experience while they graft at their craft elsewhere. They are an established pillar of the film and TV industries, with their own specialist agencies.

Why be a supporting artist?

You can learn about the industry and earn some cash.

If you’ve gone through professional training, or have already had some speaking parts on TV or in film, you may wonder what being a supporting artist can do for you. But being a supporting artist on a film set is a great way to get exposure to what a large-scale production feels like – especially valuable if you’re transitioning from theatre to film. It can be a good way to earn some cash between auditions and to gain confidence in what it feels like to be on set, so when you do get booked for bigger roles you’ll understand what the crew are looking for.

Actor Duncan Hess worked as a supporting artist on a star-studded Netflix drama for three days. He tells Backstage: “It could be useful for an actor with no experience of filming discipline or studios in general to get a feel for the environment. If you’re lucky, it might supply useful money. I got £70 a day, plus £50 a day for supplying my car, plus £50 a day for driving my car...so a decent sum overall.”

What does a supporting artist actually do?

No-one would watch a show set in Victorian London and believe the only people present in the entire city are the detective and her sidekick. Supporting artists are nearly always non-speaking (or at least, non-scripted) roles and are crucial parts of a show. Some of the most common supporting artist roles include sitting in pubs or cafes while a conversation between show leads takes place.

Can you earn a living from being a supporting artist?

Being a supporting artist can pay off financially.

On blockbuster films and multi-million-pound TV series, supporting artists can be paid as much as £150 a day. One supporting artist mentions he had a nap on set and actually ended up getting paid overtime, so it was “closer to £200 for one day’s work.”

Most productions in the UK use three main agreements when hiring supporting artists: the FAA/PACT agreement, the BBC Equity agreement, and the ITV Equity agreement. These lay out all the average rates, which you can see here. Figures vary between those agreements, but (at time of writing) the day rates average around £85 for film and TV, but there is a multitude of other costs paid on top. It’s typical to also be paid travel (£12.55 if you’re filming within zones 1–3 in London), overtime (£8.52 per half hour), costume fittings (£35), plus extra for working through the night (£113). Supporting artists for commercials and corporate films have higher daily rates averaging £100.

With these daily rates plus all the additional fees, it is theoretically possible to earn a living from supporting artist work. However, casting calls can be quite specific and you won’t match every single one. There are a lot of people signed up to supporting artist agencies, and while you might perfectly fit a “Victorian crowd scene,” an “alien encounter” scene might be less your bag. It’s good to think about supporting artist work as a little earner to help top up your monthly take-home, but relying solely on this ad-hoc business to pay your bills could be tricky.

How can I get started as a supporting artist?

Sign up to as many supporting artist agencies as possible.

Whether you’re based in a big city or not, there are production companies across the UK who need supporting artists, especially when there’s regional filming involved. Some of the most established supporting artist agencies include Extra People, Ray Knight, The Casting Collective, and Guys and Dolls Casting.

To sign up, you’ll usually have to upload your vital statistics (height, age, weight) and a recent picture. For some agencies it’s good to add a blurb on whether you’ve done supporting artist work before and for which productions. This will show them that you’re a professional.

To boost your chances of getting work as a supporting artist, it’s a good idea to fill out your profile with as much information as possible. For example, if you own a police uniform, then upload a picture of one. Or, if you have a dog, add a picture of you walking a dog. This way, when casting directors are browsing supporting artist sites, they know what they’ll get straight away.

Ensure your availability calendar is up-to-date on agency websites too. If you can only work weekends, then add weekends in. If you have a big holiday coming up, then make sure it’s added to the system. There’s nothing more annoying for a casting director than choosing you as a supporting artist, only for them to find out you’re actually in Tahiti for two weeks.

Is it appropriate to put supporting artist-work on your showreel?

Jacob Langdon, an actor who has worked as a supporting artist on blockbuster films tells us: “Unless you have a speaking role in a production, you won’t get an individual credit. It’s not something I could put on my CV and be of benefit to me or an agent, a casting director, or a filmmaker, in terms of showing my capability and experience.”

What’s it like to be on set as a supporting artist?

Being on set as a supporting artist won’t be glamorous. You’re there to fill in the background, and chances are, you might be treated as such.

Film and TV crews have a lot to juggle, including managing “the talent” and making sure everything runs to schedule. Managing what could be hundreds of supporting artists at once is a logistical challenge, so don’t panic if the crew aren’t particularly attentive.

“It wasn’t a particularly glamorous experience, which was fine by me! But this wasn’t a high-budget production. I loved observing everything that was going on around me in a scripted production, and I still found it really fun despite most of the day being down-time,” says actor Jem (full name withheld), who worked as a supporting artist for a television comedy series.

There’s going to be lots of waiting around. It’s never as straightforward as shooting one shot and wrapping. The larger budget films do multiple takes to fully capture the scene, which can be time-consuming. If, as a supporting artist, you’re engaged in an active scene, such as running in a battlefield, then multiple shots can be exhausting. Take a book or lines to learn for a different audition. Enjoy the downtime rather than stressing out about it, and remember – you’re being paid to do nothing and chat to other members of the team!

“You’ll be required to repeat your actions several times. Do this as professionally as possible, remember your marks and stay positive,” says Extra People, a supporting artist company specialising in big-budget productions. “Positivity is always welcomed on set and productions often feed back the performance of artists and their attitude to the agent. Keeping a positive attitude will help your chances of being booked for future work on that production and future productions.”

Is there a way to turn a supporting artist-work into a bigger acting role?

It’s not impossible but it is unlikely.

“I’ve heard of one example where being an extra led to getting noticed, signed with an agent and is now a rising star on screen, but that’s extremely rare in my opinion,” Langdon tell us, adding that as a trained actor, it’s important to bear in mind that “working as an actor and a supporting artist are really different. Supporting artists are extremely important to a scene and really make the world created come alive but the actual acting work involved is minimal.”

Remember: when you’re on set, you’re not there to get discovered or to become a star. Approaching the director with your CV or spending your break hassling the stars of the show about working with them on another production won’t go down well and you might be asked to leave. You’re there to be a consummate professional: you’re getting paid to be part of the crowd, not to stand out. In fact, if you stand out, you’re not doing your job properly.

If you want to get bigger roles on films, then know that working as a supporting artist probably isn’t the way you’ll get there. Instead, see it as a great tool in your survival-cash armoury that gives you flexibility while keeping you within the broader acting universe. And continue to put time into acting training or skilling up, and focus on getting (and smashing) auditions.

How should I behave on set as a supporting artist?

Being a supporting artist is all about being polite, doing what you’re told, and doing it as quickly as possible without causing anyone else any work.

There’ll be a lot of waiting around. Film and TV sets are reliant on a multitude of things – appropriate weather, all the equipment working perfectly, stars remembering their lines. Don’t complain about waiting, or ask the assistant director what you can do to help. They’ll tell you when they need you.

Some productions might require you to sign a non-disclosure agreement (NDA). This means not telling anyone what you saw on set, or perhaps even mentioning you were working on a film. This is because there are lots of confidentiality clauses involved in making films: celebrities might not have announced what they’re doing yet, for example. If you’ve signed an NDA, don’t shout about what you’re doing across social media.

Extra People urges extras to “maintain a positive mental attitude, and be professional. Shoot days or nights can be long.”

So, should I go ahead and register as a supporting artist?

Being a supporting artist is a fun and stimulating experience.

There’s no doubt that you can make friends, and maybe some useful connections just by hanging out with other supporting artists. You’ll earn some extra cash, and if you prove that you’re reliable and professional, there’s a good chance you’ll be asked to do more gigs.