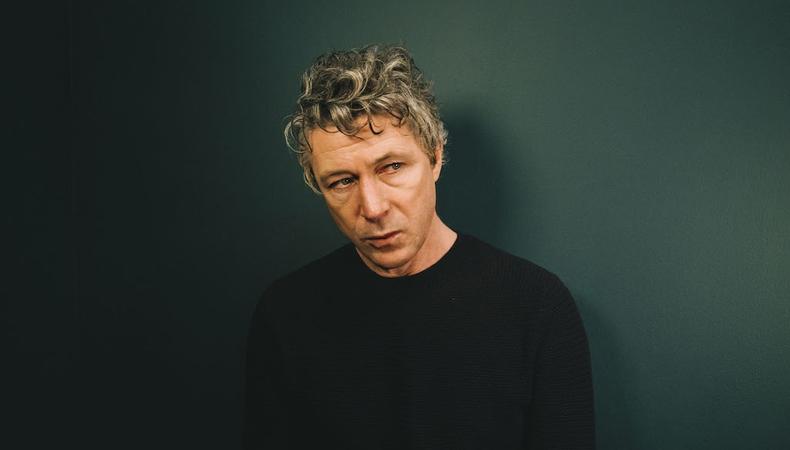 While his Petyr Baelish (aka Littlefinger) on “Game of Thrones” was known for transporting viewers to far-off, fantastical lands for seven seasons strong, Aidan Gillen’s latest buzzy television drama on History, “Project Blue Book,” sets its sights on the great expanses of space—equally far-off, equally fantastical. The acclaimed Irish actor stars as Dr. J. Allen Hynek, the real-life astronomer hired by the U.S. Air Force to investigate and disprove spacecraft sightings and extraterrestrial encounters from 1952–1969. The thing is, some of the cases he faced were shown near-impossible to disprove. As Gillen explains: “There were a large number of these that were unsolvable and with quite credible witnesses.”

On depicting Hynek’s journey from skeptic to (tentative) believer.
“He was a very level-headed, clear, and thorough scientist, and of course what he found through the years was that some of the cases he couldn’t actually explain away, but he wanted to. For him, it wasn’t about being a government stooge and rubber-stamping things and throwing them in the back of the drawer; he was an investigator, a searcher. He had a lot of questions about what might be out there, and he surprised himself, I think. His overall arc was that he went from someone who was initially a skeptic to someone slightly a bit more down the scale [toward believer].”

In playing real people, physical totems prove invaluable.
“It may seem really simple, the idea that a bunch of family photographs is really going to help you work out who you’re supposed to be playing, but that’s what happened…. I have been in touch with the family. They would answer any question [I] had, but it was just the little things of giving you a thing like a book. Having a copy of Hynek’s book that I know was in his office and that I know he read is just a little magic, like a totem. It’s there and it can get you through things.”

Gillen wanted to play a warmer character than Littlefinger after “Game of Thrones.”
“I’ve played villains and things before—not that [Littlefinger is] a pure villain, but he’s kind of a villain and dark. Having done it for seven years, I thought, It’s time to try to find something of a different shade. I would do that anyway with subsequent jobs. I tend to try to find something that’s different from what’s come before, it’s just that that one went on for so long and it was so widely seen that that’s actually what most people think they know about you, so I actively went after something that was a bit warmer and on the side of good and not so self-serving.”

He learned early on to embrace his idiosyncrasies.
“When I was starting out, I was trying to be like people I admired. And it was pointed out to me that what you’ve got going, what everyone has going for themselves, is their individuality. You’re the only you, so why not just do that? Embrace your quirks and idiosyncrasies. I did that, and if I hadn’t got it, I might be still trying to be something else.”

You don’t have to be good at auditions to be a good actor.
“Being someone who’s never been very good at auditions, I could count the number of gigs that I’ve gotten from auditions on less than two hands, and that’s over 30 years. It doesn’t go my way. I think there are actors who are great at them and there are those who aren’t, and there are good actors who are bad them—and I’m not saying anything about what I’m good at or what I’m bad at, other than I know I don’t really get many jobs from there, so I avoid it if I can. I can see a clear line, pretty much, between most of the important jobs I’ve had in the last 15, 20 years. I know which ones have led to which and why, and I’ve talked to the people who’ve said, ‘We wanted to cast you in that because we saw you in that.’ There’s a clear line, a through line. I’ve been in ‘The Wire,’ and I did get cast in ‘Game of Thrones’ from that. I had to go in and read plenty of scenes, but I knew that they were onto me and that it was OK. It gave me a confidence.”

With TV projects, Gillen prefers a large ensemble.
“A lot of the TV things that I’ve been in that have been widely seen have been what I call big ensemble pieces—for instance, ‘Game of Thrones’ or ‘The Wire’ or ‘Peaky Blinders’ or a series that I did in Ireland called ‘Love/Hate.’ You know, you’re one of 50, and if it’s well-written and well-acted and well-cast, it’s fine. Even if you’re only coming in and doing a scene every two weeks or whatever, if the world is well-drawn, the audience feels like everyone is there all the time and, you know, I quite like being part of these big ensembles, these big tapestries, as opposed to, ‘Oh, well, you’re supposed to be the star of this.’ ”

He learned early on to never be late and to pay his good fortune forward.
“I was lucky. The director who gave us those first few theater roles was a guy named Robin Lefèvre; he’s a Scottish director who worked a lot in London, although he’s worked over here. He’s a really good director. And he gave us a lot of good advice in the first few plays I was in with him. He would say things like, ‘If you cast the right people, you don’t have to do too much. Casting is 80 percent of it. Get the right people to play these roles and see how you play off of each other.’ But he really didn’t take any—I was never late. You weren’t late. I saw him sack two people for being late, for being five minutes, 10 minutes late very early on. I’ve never missed anything or been late [since]. I think that his advice was, ‘If I cast you, you seem to be the right person for the part, so just know who you are and walk in there and say it. That’s all you have to do: Just say it. And don’t be in a hurry to get famous or to make it or to win, because this is the best bit.’ I think when people look back on their careers, if they’ve done well, of course the bits that they’re going to remember most fondly are when they were sleeping on couches. When you do look back on them, those are the times when you were being formed or when your style or whatever it is was being formed that you remember most fondly. And you have to remember the people who let you sleep on their couches, too.”

Benjamin Lindsay
Benjamin Lindsay is managing editor at Backstage, where if you’re reading it in our magazine, he’s written or edited it first. He’s also producer and host of a number of our digital interview series, including our inaugural on-camera segment, Backstage Live.
END_OF_DOCUMENT_TOKEN_TO_BE_REPLACED