The Podcast Confessions of an Honest Actor 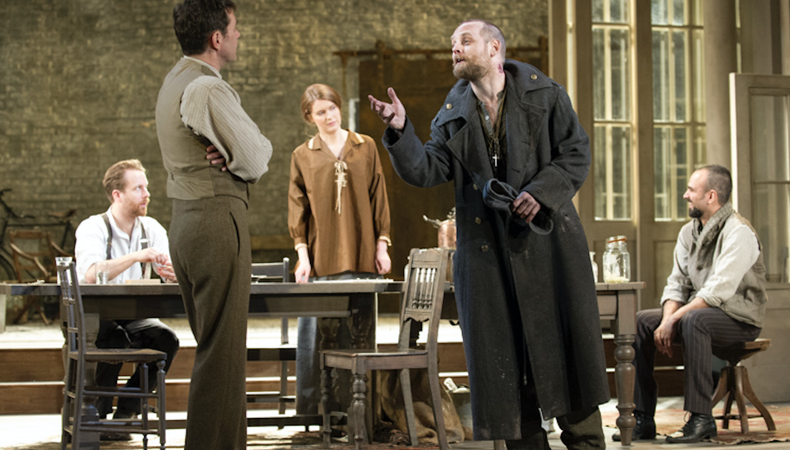 Jonathan Harden is an actor. But he’s also been a barman, waiter and builder on the side. Fed up with pretending otherwise, he set up The Honest Actors’ Podcast and an award-winning blog that hosts frank conversations with actors about the reality of the industry. The project has seen actors of all stripes share how they make peace with an industry that can feel unfair at the best of times. Ahead of a third and final series, we sat down with Harden to find out how he’s built his own success – on his own terms.

What made you want to start The Honest Actors’ Podcast?
I had gone straight from the National Theatre into the toughest period of my career but I wasn’t being honest about that, certainly not on social media. It felt like failure – but to anybody outside of a few close friends, everything looked peachy.

At the same time, I discovered the podcast Serial and searched for acting podcasts that might make me feel better. What I found was oddball, white, 40-something Americans talking about “the business” as if they were Tom Cruise’s character in Magnolia. I had a moment of clarity in the bath (all of my moments of clarity come in the bath) and decided to make a podcast of real actors’ conversations. The kind we’d never usually allow past the self-censorship of social media.

You could say it was selfish, making something I wanted to listen to. But I knew I wanted to try and improve mental health amongst actors by talking about it. I thought other people could do with a little bit of honesty too.

Who did you ask and why?
All actors have these conversations if left alone for more than 30 seconds. So I thought of people I’d talked with in dressing rooms, green rooms and trailers over the years. They had to have been in the industry for 10 years, to know it well and have had ups and downs. Very quickly, PR people began pitching actors in upcoming films but I turned them down because every other interview with an actor is because of a PR team. Other than that, the rules were no name-dropping, no bitching, no negativity.

It was important to have actors you’d expect to hear on an acting podcast and then people like Simon Darwen, who’d been at the RSC but also had other jobs between acting – that was a vital part of the picture. There was no point interviewing Emma Thomson, as lovely as that would be. Once I started, I would ask the actors who they’d like to hear. Tom Goodman-Hill suggested Sinead Matthews, Denise Gough suggested Noma Dumezweni – which made it easier. It’s irresistible for actors to be told, “Another actor wants to hear your thoughts on this.”

What was the reaction when it launched?
The first episode with Denise Gough couldn’t have been better timed as she was in People, Places and Things and having her moment. That reminded other actors to have hope. Not by selling them a fake version of the industry, or like a snake-oil headshot photographer. Instead, you heard Denise, who a year before was in the worst part of her career. Even if that play hadn’t happened, she’d worked out her place in the industry. Her energy and resolve were infectious. Actors who thought they were alone and the only loser found the podcast and discovered other actors felt the same, at multiple points throughout their careers.

Why had these conversations stayed under wraps before?
We don’t admit we’re not working. But casting directors know we’re not working – otherwise they wouldn’t be able to hire anyone. Still, we try to appear in demand, as if we make our living from acting alone. That’s true of such a small percentage of the industry that it might as well be folklore.

Joanna Scanlan says in her interview that “actors who you think are surviving from acting alone have sandwich shops with their friends, shares in taxi companies, run events catering companies.” We never speak about making money, because the sexy part of acting is meant to be that when I’m not working I lounge around in my pyjamas reading scripts, drinking fresh coffee and looking out over a beautiful garden.

It’s a lie we believe, because popping that balloon only makes it harder. Harder to get through the grind of going to a restaurant, working your guts out for eight quid an hour, then going home and learning 10 pages for an audition the next day. That’s why those conversations weren’t happening. Partly to maintain that fallacy, and partly the fear of admitting what feels like failure – but actually is the dominant narrative within the industry.

Has the podcast changed you?
I said to my wife at the start, I don’t want to become “the podcast actor.” A year later, every time I went into Spotlight actors would come up to me and say they’d listened to it. But it’s great because it’s only within the industry.

One of the things the podcast has taught me is to care less. Denise says, “Go easier on yourself, give less to the industry.” I have got to the point where I can go to an audition and then forget everything about it. I do the audition, come home, walk the dog, do things that are nothing to do with acting. Most of us are acting-obsessed but the podcast got it out of my system. I’ve gone back to other interests. Now I listen to podcasts about rock climbing and kayaking. That’s one of the reasons why Series 3 has been so long in coming.

Which episode would you give a young actor to listen to and why?
Denise Gough’s first interview is the obvious answer. I’m a fan of Noma. And Tom Goodman-Hill’s for thoughts on drama school. If I was young and getting into the industry I would say the Spotlight roundtable with emerging actors. I’m still following and checking up on them. It’s like an accidental social experiment.

You ask your guests what they would change about the industry if they could. What’s that for you?
Being self-employed in the creative industries is set up for people to have mental health issues. We’re not hospice nurses or deep-sea fishermen but we have irregular working hours, are constantly seeking and not getting work and whenever we do work we put ourselves through the mill. We finish jobs by getting horribly drunk, waking up the next day hungover, unemployed and miserable. That cycle is damaging when it’s on repeat.

As the worst takes place when we’re unemployed, the industry has somehow absolved itself of responsibility. With mental health services stripped down to the bare minimum, I am an advocate of being much better as an industry.

Finally, are you in anything at the minute?
Yes, but I’m not allowed to talk about it – sometimes I think people are lying when they say that but it’s true! And it’s been an OK year – there’s a version based on selfies that looks amazing. But I could show you another based on my bank statements that doesn’t look so great. I think it’s good for actors to recognise both aspects of that – not necessarily in public if people aren’t ready for it. But at least in how we present ourselves to others in the industry. There’s a responsibility for us all to be more honest about the full picture of what it is to exist and survive as an actor.