With “A Very English Scandal” and “Paddington 2,” the actor has found the work he’s been looking for.

British wedding guest gets the American girl. Bookshop owner gets the celebrity girl. Prime minister gets the government aide girl. For nearly 25 years, critics dusted off the word “foppish” whenever Hugh Grant got the girl onscreen, as he did in his most popular films (the Richard Curtis–penned “Four Weddings and a Funeral,” “Notting Hill,” and “Love Actually”—plus plenty more.)

“Romantic leads are not easy to bring off, because they can so easily trespass into being too good to be true or saccharine or just not very interesting, a bit bland,” explains Grant, speaking by phone from “one of my London hideouts.” “There’s a lot of satisfaction to be derived” from telling courtship stories that are “successful, not dumb,” he continues, crediting the authenticity of Curtis’ scripts: “He’s one of those people who suffered an awful lot, tangled up in the thorns of love.”

However, the fourth decade of Grant’s career has brought his best-reviewed string of performances yet as problematic men with secret lives fearing ravaged reputations. This year, the Golden Globe and BAFTA Award winner is back in the trophy conversation for dastardly turns in “Paddington 2” and “A Very English Scandal,” a three-part miniseries that began streaming on Amazon Prime this summer. 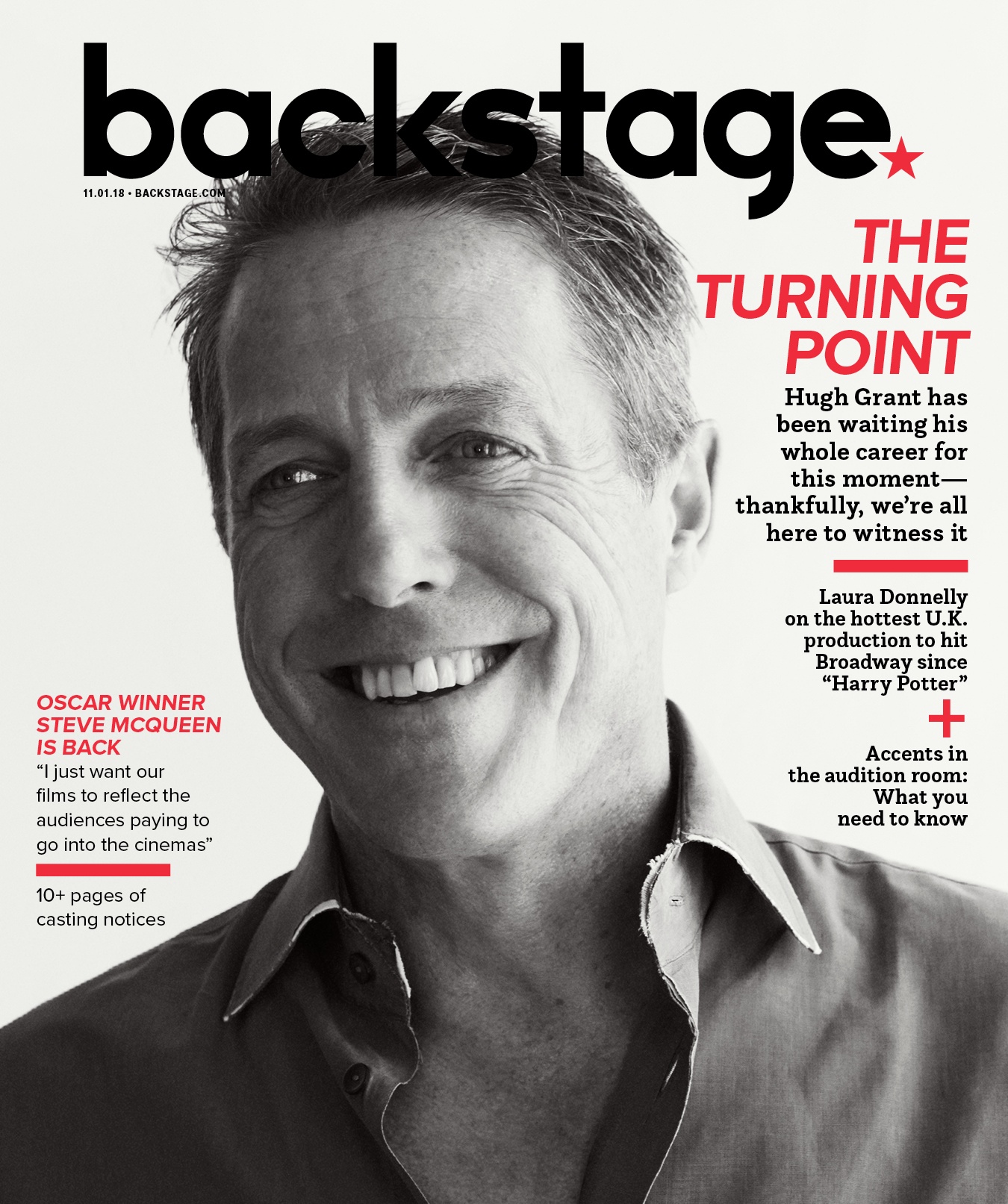 “Now I have to put on more of a mask, and, actually, it’s very liberating,” he says. “You really have to try and become possessed by someone else, and that takes me back to where I started. When I was a little boy, growing up, all I did was silly voices and silly characters. People liked them and laughed at them. And now I feel that that’s really where I belong, rather than just trying to be a charming Englishman.” Or, put more bluntly, “I just started getting better parts when I became too old and ugly to do romantic comedies. And thank god, really.”

Upon reading Russell T. Davies’ adaptation of “A Very English Scandal,” based on the namesake John Preston book about Parliament leader Jeremy Thorpe’s (Grant) alleged attempt to have his ex-lover (Ben Whishaw) killed, Grant says, “My very first reaction was, ‘Good grief, this is television,’ ”—then, scoffing, “ ‘I don’t do television.’ ”

The top-notch writing swayed him, and now he’s a streaming convert. “Literally, until six months ago, I didn’t know what Netflix was”—beyond a DVD delivery service. “My 6-year-old son explained how to work it, and it’s true, it’s a treasure trove of brilliant stuff. That’s where all filmed entertainment with humans talking to each other has migrated, whereas cinema has become something for superheroes and special effects.”

His PG-rated “Paddington 2” could not have been more of a departure from re-creating a political sex scandal. Grant’s alter ego, Phoenix Buchanan, “used to be a big West End star, but now no one will work with him because he’s so dementedly egomaniacal,” Grant explains. “So he’s a bit lonely and tragic, and I built a whole backstory about [how] he doesn’t really have a father and his mum’s in a nursing home.” Besides the challenge of emoting opposite a computer-generated bear (Whishaw again), his indefatigable Phoenix had to swordfight, shill dog food, pedal away from police, clamber atop a moving train, beguile carnival-goers, and cancan while belting Stephen Sondheim lyrics. “A lot of costume fittings, which always make me grumpy,” concedes Grant. “When you’re 58, just putting on different pairs of shoes is exhausting.”

Grant’s first film, “Privileged” (1982)—made while he was studying English at the University of Oxford—didn’t require as many costume changes, but it drew career-starting attention from agents. Acting, he reasoned, was a way to help fund postgraduate degrees. Truthfully, Grant only began to regard the craft as his true vocation about four years ago, when he was cast as St. Clair Bayfield, husband to Meryl Streep’s ear-splitting heiress in “Florence Foster Jenkins.” “I just suddenly thought, OK, so I’m not that bad after all, and I was able to look my work in the face, fully and squarely, and not hate myself,” he admits.

That film also paired him with director Stephen Frears, Oscar-nominated for “The Grifters” and “The Queen,” who later helmed “A Very English Scandal.” After Grant accepted the Bayfield role, he remembers “spend[ing] six months being terrified” of crossing into Frears’ frame, convinced that: “He’s going to be all over the actors; he’s famous for getting great performances out of people; he’s going to direct me in great detail.”

Grant himself is very detail-oriented in his role preparation. Ahead of each production, he compiles or invents “hundreds of pages of biography” on his characters. “I go through the script with a very, very fine-toothed comb, extremely slowly, over and over again, asking myself questions on every single tiny moment. Why does he order a glass of iced water there? Why does he say, ‘Hang on a moment, Simpkins’ to his assistant? And how long has Simpkins been working for him, and how does he feel about him, and when did he hire him, and has he tried to have sex with him?” To clarify, “Simpkins could perhaps only appear for an eighth of a page…. I don’t know if that ultimately did any good, but it feels like it does.”

Still, such studious prep can result in a portrayal that’s “very honest, but not necessarily entertaining.” To that end, Grant says, “You’ve got to keep an eye on the fact that you’re in this to entertain people, and not just as some kind of weird therapy,” adding that every so often, “I see acting disappear up its own ass.”

His dread about working with Frears eventually melted when the two met at a London café to discuss “Florence Foster Jenkins.” “I had 20 or 30 questions about the character, about the film,” Grant recalls. “ [I said,] ‘So what do you think about X, Y, Z?,’ and he said, ‘I have no idea.’ ”

On set, the actor learned Frears “just wants you to bring it, do it, and really, very little adjusting goes on. He’s like one of those idiot savants in music who has perfect pitch, and they can hear if a car goes past in G flat.... He watches the monitor, and if something’s wrong, he can hear it, but he won’t necessarily know what it is. He’ll just say, ‘Do it again.’ ” Grant laughs. “You know something’s wrong, but you still have to fix it yourself.”

Regardless of the role, two intertwined challenges have endured throughout the actor’s professional life: fending off self-consciousness and on-camera stage fright. “When [a film]’s being projected huge and you’re in close-up, it’s extremely dangerous to do too much acting,” says Grant. “Suddenly, you’re pulling faces, you don’t look real, and it sort of alienates audiences.”

To alleviate nerves, Grant recommends early morning runs and push-ups, and never prerehearsing with the same energy an actor intends to carry into a take. “The worst of my panic attacks came when it was a funny moment or funny scene, and some fool would say to me early in the day, ‘I love this scene and you were very funny in rehearsal. Can’t wait to shoot this,’ ” mimics Grant, letting loose sarcastic chuckles. “And then you think, I’m not going to be able to do it, I’m not going to be able to do any of those little noises or little things I did in rehearsal. Yes, that’s what happens—I always freeze, and it’s exponential from there.... Suddenly, the poor director sees the actor come back onto the set drenched in sweat, with wild eyes, and thinks, What the hell’s going on?” Making matters worse, Grant swears, “as soon as they turn the camera around on the other person in the scene, it all comes flooding back—you can do it easily. That’s the torment.”

Holding back in rehearsal requires “discipline” for the actor: “You want the director to be enthusiastic, you want the writer to think, Yeah, I’ve written a good scene, so you lean on the jokes and people laugh, but then you set up these expectations for later,” he says. “I’ve met some very big stars and excellent actors who, in a read-through, you just think, Well, really, you should be fired, because they just mumble. But they’re absolutely right to do it, because they’re saving every single gram of freshness and spontaneity for when there’s film in the camera.”

Staying on the topic, he reports, “Occasionally, if I’m drunk, when I’m flicking through the television channels, I’ll see a film I’m in and I’ll watch 10 minutes of it. Every moment that I prerehearsed and am clearly trying to reproduce a little nice delivery of a line that I’d prepared before, it looks boring to me and fake. But every time I had no expectations in that scene and just thought, Oh, I’ll just invent it on the spot, it looks great. And inventing things on the spot is a great way to get around stage fright.”

If anyone from Grant’s brood—“five small children that never sleep”—follows him into the business, he has prerehearsed a supportive, practical speech, the same one he delivers to his friends’ curious kin: “ ‘Brilliant, but, give yourself a cutoff period. If you’re 20 now, say, “By the time I’m 30, if I haven’t made it, I’m definitely going to stop and do something else.” Because you will have something else you want to do in life.’ ”

Photographed by Philip Gay on September 28 at the Blakes Hotel in Kensington, London.